Newton Leroy Gingrich and a few lemmings are acting-out in public again.

There’s so much hypocrisy in American politics that most days, it’s hard to keep lunch down.  But even those who’ve managed not to become so jaded by it that they’ve voluntarily given up their right of suffrage, are still forced to suffer the seemingly endless rotation by the media of political hacks and has-beens.

Enter again and again and again and again, one Newton Leroy Gingrich.  Now I’m not going to waste your time by running down a list of all the asinine things Gingrich has done, because you can find them  here. But we’re interested in the role religion plays in our political process, so let’s concentrate on Newton Leroy’s application of his Christian family values to his own personal and political life.

With a war really starting to crank up during the early sixties, Newton Leroy decided to stuff himself full of edumacation— thanks to family and student deferments that kept his pasty white ass this overweight chickenshit out of the Vietnam War.

In 1962 when he was nineteen, he married Jackie Battley, his former high school geometry teacher;  she was twenty-six.  (By now you’ve probably heard The Newter disputes the ugly story about him asking for a divorce from her while she was in the hospital. But then…)

With the Mrs bringing in the paychecks, young Newton liked being a professional student at Tulane.  And it was here that Newton Leroy began attending the St. Charles Avenue Baptist Church.  Oh, he wasn’t interested in religion per se, but rather the effect of religion on political theory.  But if you’re gonna hang with Baptists, sooner or later they’re gonna baptize you.  And just like that, Newton had one of the necessary legs of the stool of politics.

She isn’t young enough or pretty enough to be the President’s wife.
—Newton Leroy Gingrich, on his first wife, Jackie Battley

Despite all this effect of religion on political theory stuff, it wasn’t helping him to a better understanding of morality.  By the spring of 1980, Newton had all the degrees he needed to pad his political resume, the second leg of the stool.  And thanks to an on-going marital affair he was having with a young woman named Anne Manning, he was finally ready for a Republican career in politics.

But Newton Leroy was realizing his little penis antics could also lead to big trouble, so he did what any phoney proponent of family values would do— he threatened Anne Manning:  “If you tell anyone about this, I’ll say you’re lying.”  Manning, of course, knowing what a self-righteous little weasel dick Newton Leroy could be, immediately spoke to the press about her relationship with him during the 1976 campaign, saying,  “We had oral sex.  He prefers that modus operandi, because then he can say, ‘I never slept with her.'”

Unfortunately, Jackie contracted cancer while all this was happening.  But her boy Newton had turned into a man with a mission.  While in the hospital recovering from her third cancer surgery, Newton stopped by to discuss— what else— divorce.  And a mere six months after the divorce was final, Newton Leroy had tied the knot again, wedding Marianne Ginther in 1981.

Jackie, meanwhile was forced to take him to court— to force him to make child-support payments.

Any male who doesn’t support his children is a bum.
—Newton Leroy Gingrich

But the Newtster (his nickname for his little trouser snake) had other fish to fry.  Even before his newt-like memory had forgotten the sordid hypocrisy of that ugly escapade, by the mid nineties the Newtster was getting him into even more trouble up on Capital Hill. 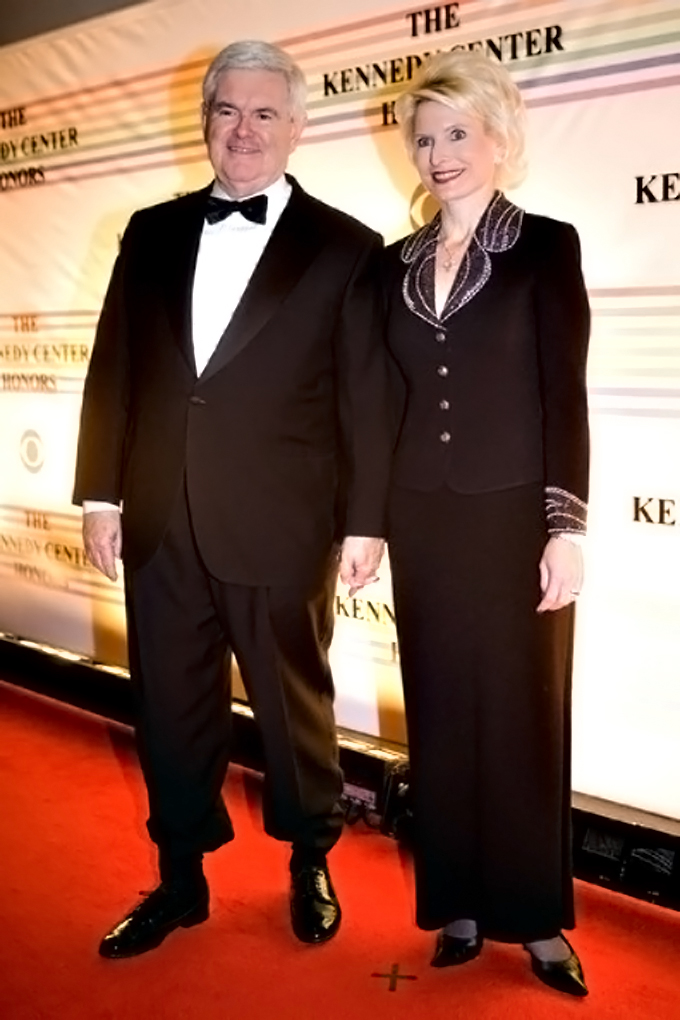 Newton Leroy was finally nailing a woman “young enough and pretty enough to be a president’s wife.” That kind of egomaniacal crassitude aside, just how fucking out of touch with yourself do you have to be to wear your pants that way?

Think the gods don’t have a sense of ironic justice?  Even as the increasingly pudgy little viper led the charge on Capital Hill against President Bill Clinton over the Monica Lewinsky spooge-abaloo, he was forced to publicly acknowledge that he himself was also having yet another extramarital immorality festival.

“The honest answer is yes,” Gingrich, a potential 2008 Republican presidential candidate, said in an interview with Focus on the Family founder James Dobson . . . “There are times that I have fallen short of my own standards.  There’s certainly times when I’ve fallen short of God’s standards.”

Gingrich began an affair with Callista Bisek which continued throughout the Congressional investigation of Bill Clinton and the Lewinsky scandal.  In 2000, Gingrich married Bisek shortly after his divorce with second wife Ginther was disappeared, and he had passionately and persuasively assured the young Bisek that he would never ever ever again behave like the morally bankrupt scum-wattle hypocrite he was.

But. His hot new squeeze, twenty-three years younger than the increasingly flaccid Newtster, had introduced him to the joy that is Catholicism— where some guy in robes who just may be a pedophile will—on behalf of the omnipotent all merciful God— secretly forgive you of all your sins;  week after week, month after month;  year after fucking year.

So Newton Leroy has a fresh clean moral slate wherewith to demonstrate his Christian leadership skills, hard-won over decades of moral debauchery. What better way to begin than by chastising President Obama— for not starting a couple more wars to, you know, keep us safe by killing others, and show the world American Christians march to a different moral standard than, say, the many million Muslims of the world, especially those living in America, who now must not even be allowed to worship God in our country.

Hard to believe, I know; but there are times when Newton falls short of his own standards.

Yes. This is the kind of morally bankrupt politician that portends to run for the highest office in our land.  This is the kind of hypocritical scum that calls others “deviants” and “miscreants” after decades of his own public moral depravity.  This is the kind of viper that uses religion like a cudgel, a nightstick, an out of control trouser snake— to get what it wants.  Yes, this is in fact and in truth the very kind of scum who will one day— bet on it— presume upon divine mercy.

I declare that in my Father’s eternal kingdom the tree is known by its fruits.  But some of you who are as vipers, how can you, having already chosen evil, bring forth good fruits? After all, out of the abundance of the evil in your hearts your mouths speak.”
—Jesus