When Senate Minority Leader Mitch McConnell decided that his fellow Kentucky Senator Jim Bunning had become a liability to the party because of his increasing dementia, he refused to support Bunning’s re-election campaign and instead gave his support to Kentucky’s Secretary of State, Tray Grayson.

But along came political neophyte Rand Paul, a self-certified ophthalmologist , who challenged Grayson for the nomination. The son of former presidential candidate and darling of the Libertarian movement, sitting Texas Congressman Ron Paul , the younger Paul was able to parlay his family rep and the early backing of Sarah Palin into a victory in the Republican primary.

Paul would go on to win the general election, soundly defeating the Dems’ Jack Conway (whose stupid Aqua Buddha ad backfired on him badly because it was perceived as an attack on Paul’s religion).

Instead of solving a relatively small problem– Bunning was hardly a known quantity outside Kentucky– McConnell bought himself a much larger one by ushering in the presumptive head of the new Senate Teabagger Caucus. He traded a burr under his saddle for a porcupine. Your average Teabagger detests the Rethug establishment just as much as the Dem’s, especially when it comes to budgetary affairs.

In other words, McConnell’s little scheme blew up in his face. A crazy acting politician was replaced by a crazy thinking one. This wasn’t a torch being passed here, but Bunning’s protective helmet, which seems to fit Paul’s swollen head just fine. 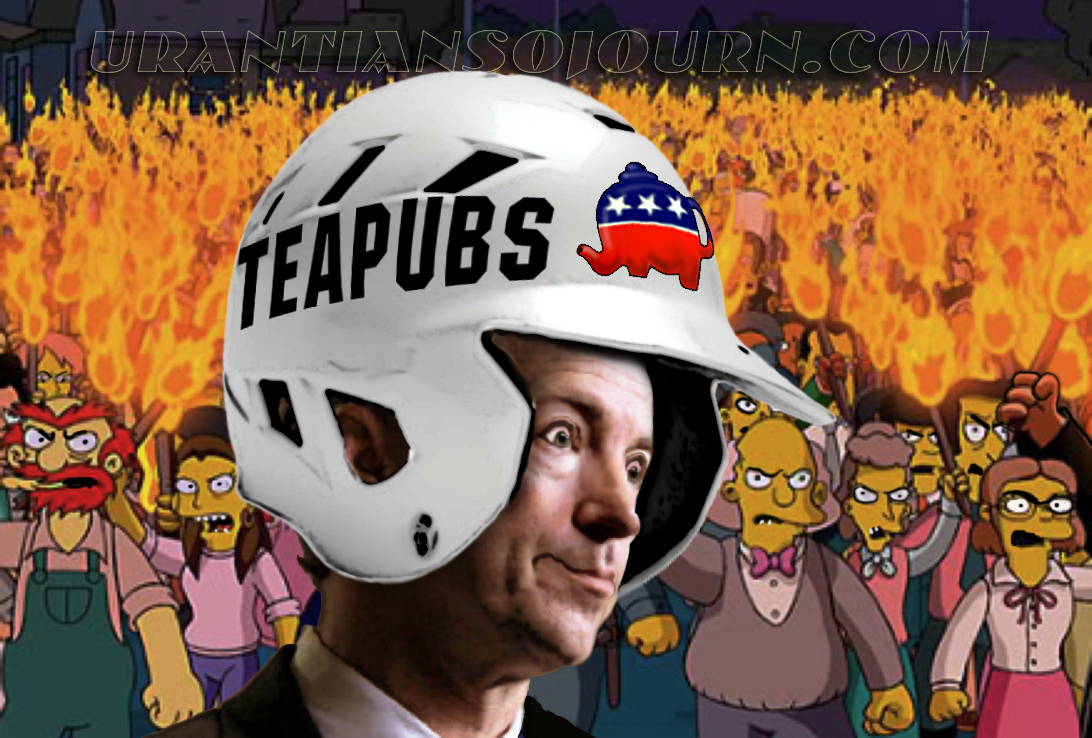 What should we expect from the gunslinging Teabagger? Paul’s penchant for speaking his mind on all things Libertarian came to a screeching halt during the general election after his appearance on the Rachel Maddow show. In discussing the Civil Rights and Americans With Disabilities Act, she bored into him like a Kentucky tick, drawing blood when she forced him to confront the practical implications of his opposition to various provisions of the Act, such as lunch counter discrimination and preventing handicap access to private office buildings.

From that point forward, Paul and his handlers adopted a duck and cover approach with the national media (a strategy adopted by fellow Teabaggers Sharon Angle, Christine O’Donnell, and Joe Miller as well). Thus, to get a better sense of his thinking, we need to review some of his pre-Maddow statements and positions.

On sustaining  a foreign policy predicated on remaining the world’s sole military superpower, Paul had nothing to say, claiming that he was wholly focused on the debt. As if spending more on the military industrial security complex than the rest of the world combined has no effect on the budget.

In response to the Deepwater Horizon disaster in the Gulf of Mexico, the largest man made ecological catastrophe  in the history of the US, if not the world, Paul famously charged that President Obama’s criticism of BP‘s actions was “un-American”:

What I don’t like from the president’s administration is this sort of, ‘I’ll put my boot heel on the throat of BP.’ I think that sounds really un-American in his criticism of business.

(In his defense, Paul really does know something about heel stomping the opposition.)

On the issue of the inheritance tax (and donning gay apparel) , Paul said:

I support eliminating the estate tax because when I die I don’t want the government to use my money to buy some homosexual a new pair of chaps.

Other issues he ducked included his refusal to answer a question about the age of the earth, an attempt to draw him out on the teaching of creationsism in the schools: and his earlier statements about who was really behind the attacks on 9/11.

Salon’s compiled 12 frame slideshow below of some of Paul’s greatest hits, summarizing each as follows:

1. The Civil Rights and Americans With Disabilities Acts might not have been necessary, since a lot of these issues can be handled locally. (Faced with a media firestorm, Paul is now insisting that he supports federal anti-discrimination measures.)

2. We could clean up the environment by suing our neighbors in court.

4. Each state should make its own guns. (The theory here is that the federal government would be prohibited from tinkering with arms manufactured and sold entirely within one state, since it regulates firearms through the Constitution’s Commerce Clause.)

5. If college students attended class armed with guns, it would deter campus violence.

6. A nuclear-armed Iran does not pose a threat to U.S. national security. (After coming under attack from the neoconservative wing of the GOP, Paul has walked this back and now insists that “we should do everything possible to keep them from having nuclear weapons.”)

8. President Obama has “apologized” for both America’s greatness and the Industrial Revolution.

9. Massachusetts’ universal healthcare law has been a disaster and is somehow related to Nadya Suleman, the “Octomom.”

10. Recruiting high school students for military service is a bit like Nazi Germany.

12. If the national debt gets bad enough, the American people could end up voting a person like Adolph Hitler into office.

Paul’s penchant for flip flopping is evident in Slide One concerning the Civil Rights Act; and in Slide Six, the threat posed by Iran if it develops nuclear weapons. Missing from the compilation, however,  is Paul’s wholehearted, pre-election support for eliminating budgetary earmarks, a signature Teabagger issue.

But that was then and this is now.

Saturday following the election, in an article sub-titled A ‘Crazy’ Reformer by the Wall Street Journal’s Mark Kiminsky, Kaminsky reports this about his interview with Paul:

In a bigger shift from his campaign pledge to end earmarks, he tells me that they are a bad “symbol” of easy spending but that he will fight for Kentucky’s share of earmarks and federal pork, as long as it’s doled out transparently at the committee level and not parachuted in in the dead of night. “I will advocate for Kentucky’s interests,” he says.

Sunday, on ABC’s This Week,  Cristianne Amanpour asked him:

AMANPOUR: And what about earmarks? Would you say no to earmarks?

PAUL: No— no more earmarks.

By Monday, the National Review reflected the political firestorm that his remarks had set off, asking:

Is he selling out already?

Tuesday, Paul was back on CNN with Wolf Blitzer saying he was misquoted by Kaminsky, adding:

Got that?  Why do I get the feeling that this guy is juggling hatchets inside his head?

Given that Teabaggers demand ideological purity from their candidates— no compromise, no surrender— it will be interesting to watch just how principled Paul really is. If the earmark issue is any indicator, they are in for some big disappointments. It’s one thing to wax philosophic and frame every issue in ideological terms, another to actually govern. Politics is the art of compromise, and the Teabaggers are in no mood for compromise. They might just end up eating him alive.

By March, Paul is going to have to ‘get his man pants on’ and vote on items like earmarks, favored by McConnell and other Rethug senators used to bringing home the bacon; continuing resolutions and raising the debt ceiling,  necessary to prevent the US government from defaulting on its debts and precipitating a worldwide financial meltdown; the budget itself, laden with corporate pork and subsidies; funding the IMF;  funding two wars,  two occupations, and  two nation building enterprises, huge chunks of which are outsourced to profit driven private contractors.

But Paul seems to think he can have his cake and eat it too. Asked about the consequences of voting the government into default, he cynically told Amanpour that he could afford to make ideologically symbolic votes like that to placate his constituency where his  one vote isn’t dispositive:

AMANPOUR: One of the emergencies is going to be voting to lift the debt ceiling.

AMANPOUR: Would you do that?

PAUL: I don’t believe I will vote to raise the debt ceiling.

AMANPOUR: The government would default, then.

PAUL: Well, only if we won the vote, would they default.

Right– “Only if we won the vote.” If I were the Dems, I’d do everything I could to whip votes in such a way that his is the deciding vote whenever possible.

Paul  might be crazy like a fox, but still crazy if he thinks he can keep up that kind of crap indefinitely. Sooner or later the Teabaggers will see through his  establishment appeasement  charade and rip him a new one.

On budgetary matters, Paul is on record saying:

1. He wants a balanced budget, enforced by a Constitutional amendment.  To get there in this upcoming fiscal year alone would require cutting the budget by a third, which would suck something like $1.3 trillion out of the economy as government contracts to the private sector are cut and workers in both the public and private sector are laid off. (Over half of the people who still have jobs work for the government.)

2. He wants to make permanent the Bush tax cuts of 2001 and 2003. That, and the effect of applying the Alternative Minimum Tax, would, according the Congressional Budget Office, add another $3.9 trillion to the national debt over the next decade.

3. He wants to wants to eliminate the inheritance tax. Under a mandated balanced budget, that would require additional tens of billions of dollars of cuts in discretionary programs. It would also negatively effect non-profit charities as the 55-45 write-off incentive would disappear.

4. He wants to repeal the Patient Protection and Affordable Care Act (PPACA, aka ”Obamacare”). The  CBO has estimated PPACA would save the government $143 billion over a decade. He’d also like to privatize Medicare (from which he derives a considerable amount of his own personal income).

5. He wants to privatize Social Security for everyone under 55. The Social Security Trust Fund represents  the country’s last big remaining stash of cash. It is thus the target of  greedy Wall Street banksters who want to use it to create the next great bubble and collapse.

6. He’s open to cutting the military budget, but won’t say how much or where.  Afghanistan and Iraq added a trillion dollars to the deficit last year alone.

A trillion here, a trillion there — pretty soon you’re talking about real money. To really balance the budget, you’d have to start selling off government assets. Start by hanging a For Sale sign on the Capitol Building.

One final thing. Given the totally whacked out rules of the Senate, any senator can put a hold on vital budgetary legislation. (Just ask Oklahoma Senator Tom Coburn whose personal hold on a billion dollars that were allocated to Haitian earthquake relief is getting moldy while hundreds of Haitians are dying of cholera unprotected from the winter rains.)

On election night, Wolf Blitzer asked whether Paul would agree to let Bush’s temporary tax cuts expire for those earning over $250k (which would reduce the deficit some $700 billion over ten years). Paul’s answer was a real jaw dropper:

Too late– we are all, already punished. For that we can thank Sarah Palin;  five ultra-conservative Republican Supreme Court justices, whose Citizens United ruling opened the floodgates of anonymous corporate cash into the American electoral system;  the Koch Brothers; Karl Rove and his small stable of anonymous multi-millionaire donors. And of course, the voters of Kentucky.

As I am sure Mr. Paul has already realized, but it’s worth noting anyway: