“I’ve seen things you ‘people’ wouldn’t believe.  Attack ships on fire off the shoulder of Orion.
I’ve watched C-beams glitter in the dark near the Tannhäuser Gate.  All those… moments… lost in time… like… tears… in rain…”

In a film widely regarded as one of the best movies ever made, a humanoid creature created and “brought to life” by man in an undocumented science fiction process, risks life and robotic limb to confront the head of the “Tyrell Corporation”— his corporate creator-father— to bargain for more life.  Implanted with suggested memories supported by phony photographic evidence, “he” and a few of his self-aware “replicant” buddies recognize the fictitious nature of their “personal” identity, but still decide life is worth living for as long as they can exist as sentient beings who can experience reality.

Outside of the notion of living life for life’s sake, all other overtly religious themes in the original novel were ostensibly written out of the film.  But occasional instances of dialogue invoking biblical references managed to remain: “You are the prodigal son,” remarks Dr Tyrell to Roy Batty, who admits to doing “questionable things,” but surmises that it was nothing the “God of bio-mechanics” wouldn’t let him into heaven for.

But it is the relentless intensity with which these “robots” pursue their desire for a longer life— as robots— that so completely humiliates the passive acceptance of atheistic human beings, who not only dismiss the idea of eternal life because it cannot be “scientifically proven,” but apathetically acquiesce to the supposed inevitability of the paltry human life span, currently averaging around 67 years.

Beauty, the atheist might say, is in the “eye” of your ill-defined organismal selfhood somewhere;  not really existent in the mind as a non-material and thus unprovable “value.”  For the atheist, all intangible values like Beauty, like Imagination, Goodness, Truth, and in particular, any and all so-called spiritual experience— are all perforce just temporal imaginings non-physical things that just fuck with your head while it’s busy breathing oxygen molecules to extend its terminalness-ness for a brief, meaningless duration. 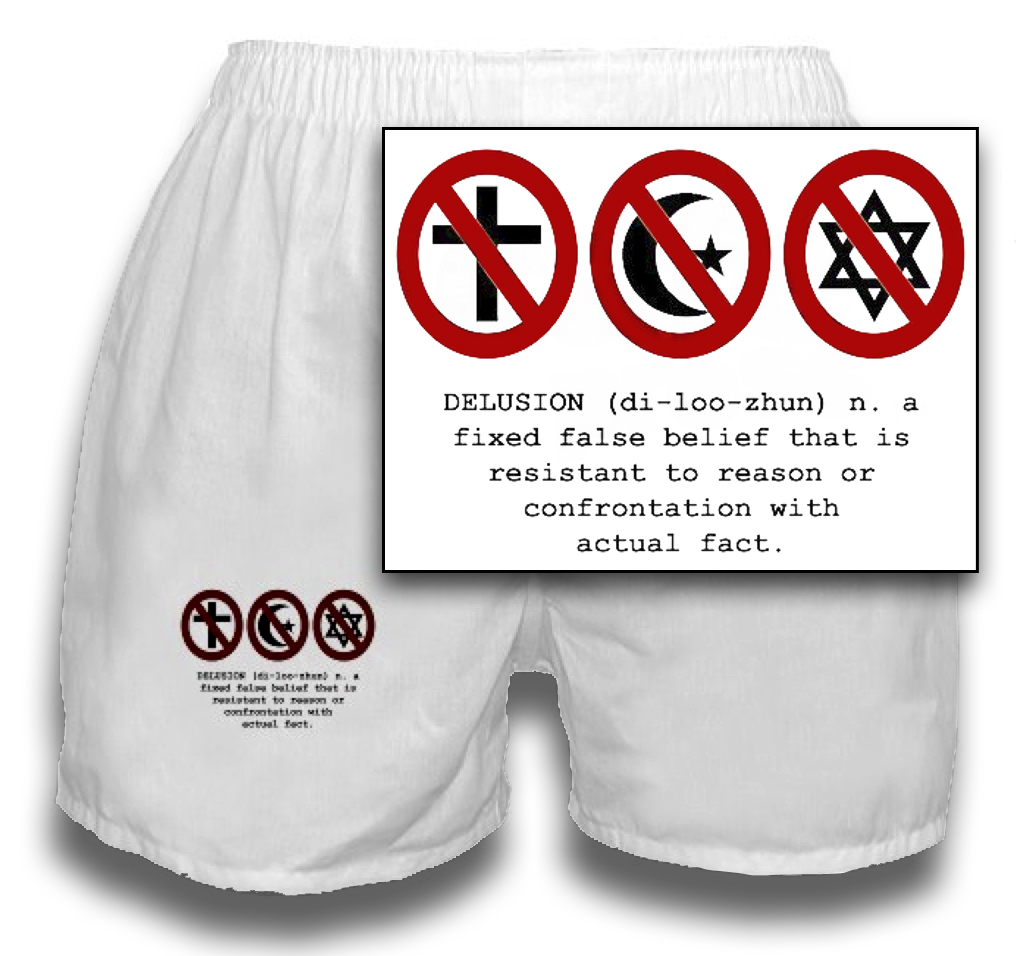 Okay, it’s a “Holiday” gift.  But why any self-respecting atheist would want his penis so closely associated with the definition of DELUSION is beyond me.

Perhaps few Atheists may concede it, but they can’t logically consider themselves much more than science fiction replicants made by the Tyrell Corporation, sentient but temporal organisms made for shit work on some accidental world in time and space.  For without a grasp of the spiritual nature of life and what it means to be a human being— a creature with the potential to become eternal— you may just as well be a Nexus 6 combat model;  you are expendable and your “personal” existence is meaningless.

Isn’t it strange then, this desire to partake in some extrapolated version of what started as a religious celebration of the Son of God becoming incarnate as a human being?  Perhaps.  But a highly secularized religious holiday like Christmas is, in fact, easy for secular people to celebrate.  Some even argue that the more atheists celebrate it, the more they help diminish it’s “irrational” religious origins and meanings.  Even sans all religious themes, it is apparently so strong a need in the human psyche that the irony of interpreting the immaterial values of the divine (truth, beauty, goodness) as somehow secularly meaningful to temporal life is not only ignored, but deliberately re-cast as “personal” and “lasting.”

In the imaginary world of Bladerunner’s Los Angeles, Roy Batty and his Nexus pals were not “made to last” more than four years.  Their “touching keepsakes” were just sham components of a fictitious “personal” identity, devoid of any real or lasting value.  Human beings, however, bestowed with freewill creature-hood and a potentially eternal personality, are made to last somewhat longer in the material sense, but the choice of just how long that might be is left up to the individual.

We can set our sites low, and choose to be happy and content with this short, intense life of material existence, as atheists choose to do.  Or we can invoke the power of faith in the “exceedingly great and precious promises of God,” which includes a life eternal on the divine worlds of the universe that is so rich and full— so complete and replete— that it wholly transcends the human concept of anything a created being could possibly experience.

Most Urantia Book believers know all too well the difficulties in sharing the fifth epochal revelation with Christians, let alone atheists.  They understand that Christianity stands in desperate need of new contact with the actual life and teachings of Jesus, the incarnated Creator Son of a vast universe of things and beings.  And they also know that for all those who sincerely struggle with the nature of their existence on this backward world of time and space, there is new insight and divine revelation to be had by anyone willing to learn about it, and that includes atheists, agnostics, and anyone else lost in the moral crosscurrents and sociologic rip tides of the cyclonic transitions of this scientific era.

But there will be little tranquillity in the religious world until the great struggle between three contending philosophies of religion is ended: The spiritistic belief (in a providential Deity) of many religions;  The humanistic belief of many philosophies;  and the mechanistic and naturalistic conceptions of many sciences.

Eventually these three partial approaches to the reality of the cosmos will become harmonized by the revelatory presentation of religion, philosophy, and cosmology which portrays the triune existence of spirit, mind, and energy, all proceeding from the same source, indeed, the first source and center of all things and beings.

Until then, we can still wish each other the maximum of joy and happiness, whether it be secular or religious; philosophy put aside, we are still all members of the family of mankind.

You humans have begun an endless unfolding of an almost infinite panorama, a limitless expanding of never-ending, ever-widening spheres of opportunity for exhilarating service, matchless adventure, sublime uncertainty, and boundless  attainment. When the clouds gather overhead, your faith should accept the fact of the presence of the indwelling Adjuster, and thus you should be able to look beyond the mists of mortal uncertainty into the clear shining of the sun of eternal righteousness on the beckoning heights of the mansion worlds of Satania.
—The Urantia Book