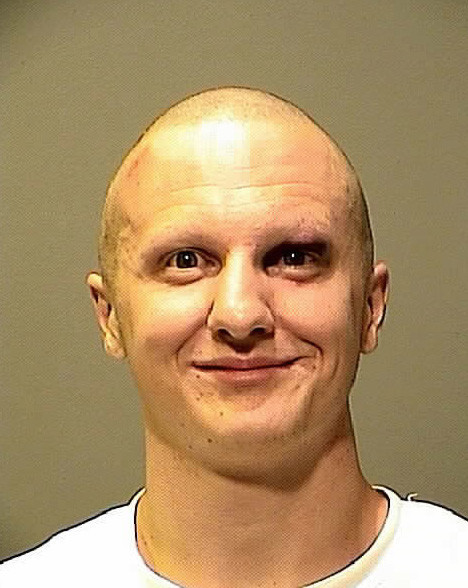 Mugshot of Jared Loughner after massacring  six and wounding fourteen

When asked if his daughter, Rep. Gabrielle Giffords (D-AZ), currently in a medically induced coma after taking a bullet to the brain,  had any political enemies, Spencer Giffords replied:

While at present there is no direct line of evidence linking Jared Loughner to the Tea Party— he’s obviously a mental case with a deep distrust of government and may have chosen Arizona Rep. Gabrielle Giffords and her staff as targets of opportunity– what is certain is the climate of fear and violence being perpetrated by Teabagger politicians:

“If this Congress keeps going the way it is, people are really looking toward those Second Amendment remedies.” – Sharron Angle

“I am convinced the most important thing the Founding Fathers did to ensure me my First Amendment rights was they gave me a Second Amendment. And if ballots don’t work, bullets will.”  –Joyce Kaufmann, former chief of staff for Rep. Allen West

Words and other symbols, like Sarah Palin’s crosshairs map, have consequences, especially for individuals with a tenuous grasp on reality.  In a post titled Racism, Propaganda, And Health Care Reform I wrote:

…the continuous repetition of selected words can turn them into symbols with deep neurological roots, capable of exciting repressed emotions stored in the lizard brain.

When combined with other emotionally charged symbols, these can be twisted into a false narrative which is indistinguishable by the brain from the real thing. Cognitive science has shown that hallucinations use the same neural circuitry as does “objective” reality. That’s why a representation of a thing can become the thing itself.

In support thereof, I cited a book by Dr. Bryant Welch titled:  State of Confusion: Political Manipulation and the Assault on the American Mind (2008). In light of the last week’s murders that included a federal court judge, a congressional staffer, and a nine year old girl featured in the book Faces Of Hope: Babies Born On 9/11, I return to Dr. Welch’s book.  In it he recounts a transformative moment in his understanding the American political psyche. While in Washington D.C. lobbying on behalf of the American Psychological Association, he  ran into a group of tobacco public relations specialists [bolds mine].

When I asked them to describe their work, they went into great detail on many of the messages they had developed for tobacco. Most strikingly, there were no protobacco themes in the ads. Instead, they were carefully constructed, but nonsensical, messages that amounted to intellectual gibberish for anyone trying to follow the content. There was so little coherence to the messages that even after listening to a few examples, I was unable to repeat them. These were marketing initiatives that were seemingly appropos of nothing, …

The joke was on me. I frequently had to confess to the tobacco experts that I could not understand the message of theses ads. They laughed and said: “That’s not our goal. We don’t want you to come away with a message, even if we had a positive one, it would run afoul of government regulations banning tobacco advertising . What we want you to hear is the word “tobacco” and/or “smoking.”A message with any content would only dilute the experience.” The gleeful expression on these invariably attractive and bright young professionals was eerie.

Other tobacco ads were public service ads that were ostensibly antismoking. I assumed it was simply an attempt to undo part of the negative image that the companies had generated by associating themselves with worthwhile causes, But it was still striking that a company would spend money on ads that seemingly told people not to use their product. In fact, it was far more cynical than that. That apparent motive was a front for a more sinister one that was predicated on an understanding of how the mind really works, rather than how we might think it works.  The mind works symbologically, not logically.

Symbols, mental representations we have in our mind, create images of emotionally laden experiences that we associate with those symbols. These can be very powerful. Because we see ourselves as primarily thinking people, acting on the basis of logic, we can very easily overlook the impact that these symbols are having on us. They operate almost exclusively on a feeling level; that is, they create a visceral experience that we have in our body but not necessarily on our conscious, rational thoughts. Because of this symbols motivate us through unarticulated feeling states in ways we often do not understand. The conscious thoughts that we have then tend to arise only in response to these primary feeling states, not in response to logic.

For example, one tobacco advertising campaign told people “Think. Don’t Smoke,” In the workings of the mind, the operative language of that ad is “smoke,” Smoke is the symbolic object. The negation “don’t” is like an inert substance. We cannot think of not smoking without thinking of smoking. The concept of smoking becomes an image that takes the form and plays the the highly active role of a symbol in the mind. Once there’s an image of smoking in people”s heads, they are just as likely to light up a cigarette as they are to become more resistant to lighting one up.

That visceral experience in this case is the smoking of a cigarette. The image this creates is not merely a verbal thought. It is instead, an emotional experience, all of the carefully conditioned prior associations to cigatrette smoking comes into play, including the Marlboro Man, “You’ve come a long way, baby,” Humphrey Bogart, and other implanted associations connected with being “cool” or being soothed by a cigarette.

Once it has the status of a symbol, the image functions as an emotional implant….Paradoxically, then, one can plant the idea of smoking by telling someone not to do it. The content of the message is antismoking, but it can be a powerful and effective form of suggestion to encourage people to smoke. [pps. 137-139]

As cognitive scientist George Lakoff, author of Don’t Think of an Elephant, is constantly saying:  repeating a frame, even if the intent is to discredit it, energizes it. This is a mistake that Dems and most progressives are constantly making by allowing the Rethugs to frame the issues and then trying to debate within those frames.  Because the Rethugs’ natural background is business and advertising, they have a far greater understanding of how the mind works than the Dems, who generally hail from academia and believe that their rational policy initiatives will win the day with voters.

The key to a successful sales campaign, whether it is marketing cigarettes or politicians, is constant repetition. George H.W. Bush‘s former media adviser, Roger Ailes, after succeeding in getting him elected to the presidency, moved on to spearhead the tobacco industry anti-regulatory campaign. Later he came to the notice of media mogul Ruppert Murdoch, who made him president of Fox News, a pro-corporate, 24/7 GOP propaganda channel where repetition is the order of the day.

Forty years ago, Marshall McLuhan, who understood something about the nexus between technology and advertising ,  wrote this corollary to what today’s cognitive scientists understand about the workings of the unconscious mind:

The ‘content’ of a medium is like the juicy piece of meat carrier by the burglar to distract the watchdog of the mind.

Combined with economic conditions not seen since the last great Republican depression, lax gun laws, severe cut-backs in local, state, and government mental health services– the latter would take an even bigger hit under the Rethugs’ proposed Repealing the Job-Killing Health Care Law Act— the language of incitement is acting as an accelerant to an already flammable social situation.

Those of us in the “reality-based” community need a better understanding of how and why the wingers are acting the way they are.