Don’t you just hate it when this happens?

Saul of Tsarsus, aka the Apostle Paul, was a Jew, a highly trained Pharisee in fact. He enjoyed Roman citizenship, a privilege that less than 8% of those who lived in the vast Roman Empire at the time could claim.

Legend has it that despite his penchant for helping send many early Christians to horrible deaths, he was travelling along the Damascus road one day and, as if hit by lightning, had a sudden conversion experience that transformed him into perhaps the greatest proponent Christianity has ever had. 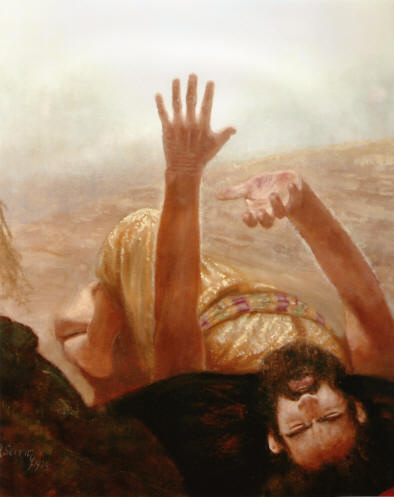 Pauline Christianity is characterized in The Urantia Book as the teachings about Christ, in contrast with the teaching of Christ.  Which is why most Urantia Book readers would call themselves Jesusonians and not Christians. They would, for instance, reject Paul’s attitude towards women [1], as well as his embrace of the blood shedding Atonement Doctrine [2], while greatly admiring his spiritual vision into the world beyond death.  [3,4]

In addition to exploring just about every facet of religion imaginable, The Urantia Book also spends considerable time examining the evolution and practice of human government, highlighting its various strength and weaknesses. Though the book was written over a half century ago, I’ve never had a problem using its teachings to derive political positions on a variety of contemporary issues. To my great surprise (i.e. naivité), fellow readers often come up with diametrically opposite interpretations and political positions. No amount of proffered textual references (I’ve been  studying the book for forty years) or factual research pertinent to a particular issue has, as far as I can recall, ever resulted in me changing a single mind on a single political issue.

It wasn’t until I began an autodidatic study of cognitive science that I realized that all such attempts at persuasion were well-nigh useless, given how the brain’s emotional, instinctual, and conceptual circuits are intertwined.

Then again, lightning does strike on occasion. Which is about my only cause for optimism these days.

[All quotes from The Urantia Book]

1. It was most astounding in that day, when women were not even allowed on the main floor of the synagogue (being confined to the women’s gallery), to behold them being recognized as authorized teachers of the new gospel of the kingdom. The charge which Jesus gave these ten women as he set them apart for gospel teaching and ministry was the emancipation proclamation which set free all women and for all time; no more was man to look upon woman as his spiritual inferior. This was a decided shock to even the twelve apostles.

Notwithstanding they had many times heard the Master say that “in the kingdom of heaven there is neither rich nor poor, free nor bond, male nor female, all are equally the sons and daughters of God,” they were literally stunned when he proposed formally to commission these ten women as religious teachers and even to permit their traveling about with them. The whole country was stirred up by this proceeding, the enemies of Jesus making great capital out of this move, but everywhere the women believers in the good news stood stanchly behind their chosen sisters and voiced no uncertain approval of this tardy acknowledgment of woman’s place in religious work. And this liberation of women, giving them due recognition, was practiced by the apostles immediately after the Master’s departure, albeit they fell back to the olden customs in subsequent generations. Throughout the early days of the Christian church women teachers and ministers were called deaconesses and were accorded general recognition. But Paul, despite the fact that he conceded all this in theory, never really incorporated it into his own attitude and personally found it difficult to carry out in practice.

2. But Paul’s theory of original sin, the doctrines of hereditary guilt and innate evil and redemption therefrom, was partially Mithraic in origin, having little in common with Hebrew theology, Philo’s philosophy, or Jesus’ teachings. Some phases of Paul’s teachings regarding original sin and the atonement were original with himself.

3.  Paul also had a view of the ascendant-citizen corps of perfecting mortals on Jerusem, for he wrote: “But you have come to Mount Zion and to the city of the living God, the heavenly Jerusalem, and to an innumerable company of angels, to the grand assembly of Michael, and to the spirits of just men being made perfect.”

4. Paul learned of the existence of the morontia worlds and of the reality of morontia materials, for he wrote, “They have in heaven a better and more enduring substance.” And these morontia materials are real, literal, even as in “the city which has foundations, whose builder and maker is God.” And each of these marvelous spheres is “a better country, that is, a heavenly one.”