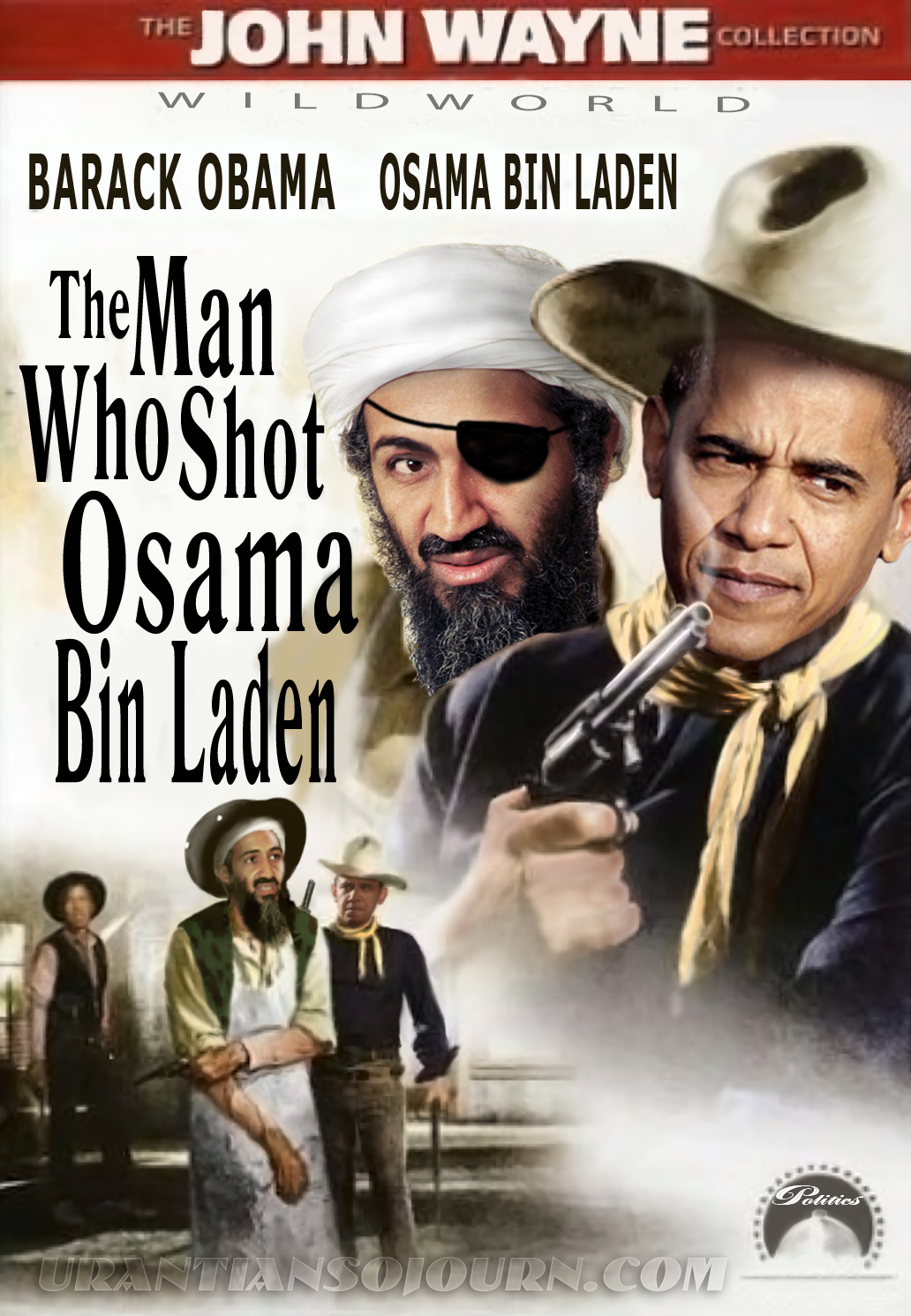 Six days after the attacks of 9/11, President George W. Bush gave a press conference where he proclaimed in his trademarked macho swagger:

“I want justice,” Bush said. “And there’s an old poster out West I recall, that said, ‘Wanted, Dead or Alive.'”

Three days later, he addressed a Joint Session of Congress and reiterated his promise:

“Tonight we are a country awakened to danger and called to defend freedom. Our grief has turned to anger, and anger to resolution. Whether we bring our enemies to justice, or bring justice to our enemies, justice will be done.”

A mere six months after that,  in a textbook display of his ADHD, Bush said:

“I don’t know where he is. I really just don’t spend that much time on him, to be honest with you.”

Dead or Alive, my ass.

In late 2005,  Bush disbanded the special ‘Alec Station” CIA team that had been created during the Clinton Administration for the single purpose of hunting down Bin Laden. In 2006 interview with Sean Hannity, Weekly Standard editor Fred Barnes reported that in a recent meeting with Bush, the president had told him that capturing bin Laden is “not a top priority use of American resources.” It never was, as I’ll explain below.

So why would Bush flip 180 on his promise to bring Bin Laden to justice?  Was it a shift in his counter-terrorism strategy, as Bush Administration apologists have tried to spin it?  Or did it serve a larger narrative purpose  that helped divert trillions of dollars to the military industrial complex?

As radio talk show host Tom Hartmann points out, every superhero needs a worthy adversary to highlight his own magnificence. In Bush’s case, not only was Bin Laden the perfect foil for cranking up the MIC’s war machine, always in search of scary villain to justify its enormous expenditures to protect us from enemies abroad. It also helped usher in an $800 billion national security industry at home.

But the biggest payoff for Bush personally was his re-election bid. Having sold the Iraq War as the front line in the war on terrorism, successfully conflating 9/11 and Bin Laden with Iraq and Saddam,  it put Bush in the position of campaigning in 2004 as a war time president, historically a near-slam dunk for electoral victory. Prior to accomplishing all that, no one in the Bush’s inner circle wanted to capture or kill the goose laying all those golden eggs. Afterward, Bin Laden pretty much fell off the radar, though he still retained symbolic value in the ‘war on terra.’  (In retrospect,  if Bin Laden hadn’t existed, the Bushies would have invented him.)

As Bush’s term came to an end, Bin Laden became  his successor’s problem.  During the 2008 presidential campaign, both Barak Obama and John McCain promised to finally bring Bin Laden to justice. Obama promised that he would make it his top national security priority  John McCain went so far as to say:

In a town hall forum, McCain doubled down:

“I will look you in the eye and promise you that I will get Osama bin Laden and bring him to justice.”

The following January, McCain swore that he would chase Bin Laden “to the gates of hell.”

McCain also claimed he had a super secret decoder ring type plan to bring him to justice:

“One thing I will not do is telegraph my punches. Osama bin Laden will be the last to know.”

Asked why if Bin Laden’s capture or killing was so important he didn’t immediately share it with the current president, McCain replied:

“Because I have my own ideas and it would require implementation of certain policies and procedures that only as the president of the United States can be taken.”

That suggests he would do something bold that Bush wouldn’t, like send special ops troops into Pakistan where a consensus of the intelligence community believed he was hiding out. But no, that that couldn’t have been it, per this 2008  interview with Larry King:

LK: “If you were president and knew that bin Laden was in Pakistan, you know where, would you have U.S. forces go in after him?”

JM: Larry, I’m not going to go there and here’s why, because Pakistan is a sovereign nation. I think the Pakistanis would want bin Laden out of their hair and out of their country and it’s causing great difficulties in Pakistan itself.

So, even if McCain decided to act on the same intel that Obama had (which carried a 20-40% uncertainty factor), he wouldn’t have sent in ground forces. The alternatives were a missile strike or dropping a couple of thousand pounds bombs on the complex. Not only would he have risked considerable collateral damage– there was a couple of dozen women and children number of women and children living on-site,  not to mention the chance of stray munitions landing on other homes in the neighborhood–  McCain would have destroyed any chance of positively identifying Bin Laden, assuming that he was killed and his body found,  since  DNA doesn’t take kindly to the heat of High Explosives.  Additionally, and perhaps more importantly, McCain would have destroyed a treasure trove of intelligence that was sitting on Bin Laden’s hard drive, other electronic storage media, notebooks, etc.

Let’s draw some contrasts. On the one hand we have two military veterans, one who spent the Vietnam years AWOL for most of the time he was assigned to a champagne unit in the Air National Guard, and another who spent most of the war being tortured in a POW camp after being shot down during his 23rd bombing run over the heavily populated North Vietnamese capital of Hanoi. On the other, we have a non-vet  too young for Vietnam, who spent his early adulthood moving up through the college ranks to graduate magna cum laude from Harvard after achieving its most prestigious law school honor, editor of the Harvard Law Review.

As for their respective temperaments, Bush is an incurious, malignant narcissist with a room temperature IQ; McCain a noted hothead and opportunist who never found a war he wouldn’t support or a political position he wouldn’t flip flop on; and in Obama, a cool, somewhat detached intellectual who thinks before he acts and invites vigorous opposition to his own thinking before making a decision.

Sure, just about every politician has had to eat his words and abandon a prior held policy position.  Obama is no exception. But at least he gives the impression that when it comes to making an important decision he thoroughly investigates all the alternatives and dispassionately chooses the best one on its merits. The choice he made in dispatching the world’s most wanted terrorist stands as Exhibit One of his emotional and mental composure, and will likely define the rest of his presidency.  Even Peggy Noonan this week on the Morning Joe show characterized Obama’s success as  “a return to competence.”

As for the political ramifications, they should be substantial, puncturing the myth that the Rethugs own the trademark on national security.  And it should help Obama fulfill his pledge to begin a significant draw down of troops from Afghanistan this July, a position that most Americans now support. Let that be the first consequence of bringing Dead Eye Dickhead to justice.