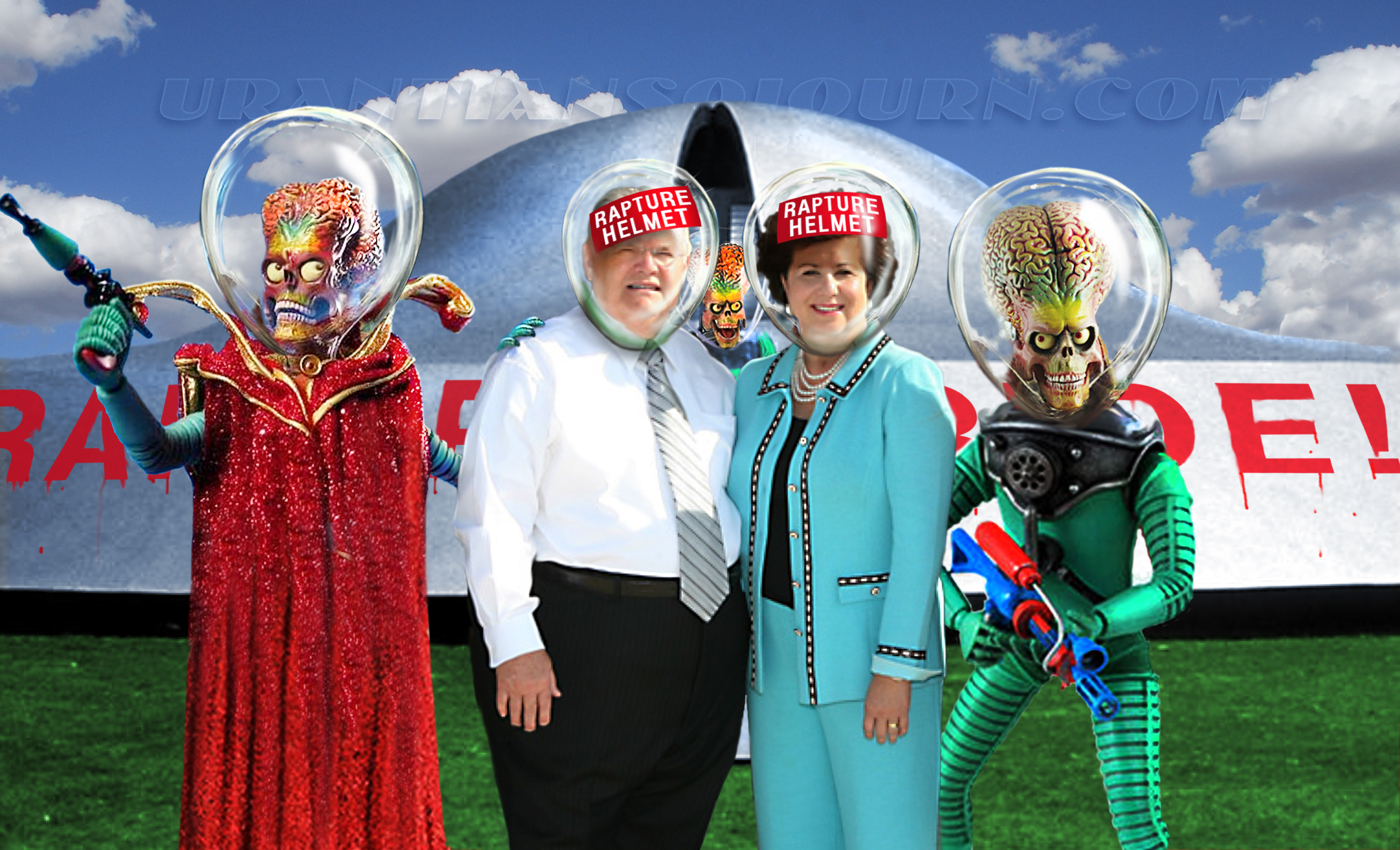 The Reverend and Mrs John Hagee, in their new “rapture helmets,” pause for one last photo op with Commander and Mrs Flybotz before boarding the Rapture Ride.  Hagee assured everyone the weapons are simply to dissuade the unsaved from forcing their way aboard. . . (If you want to feel their rapture, you must click it.)

A week from today, the long awaited Christian Rapture will begin.

That is, if the mathematical calculations of Family Radio‘s prophet in chief, 89 year old Harold Egbert Camping are correct.

Harold’s Family Radio show has been broadcasting since 1958. According to Wikipedia, it is currently carried by some 150 radio stations in the US on AM and FM, as well as cable TV, satellite, shortwave radio, and the Internet. It also translated into a number of foreign languages. And he’s putting his money where his mouth is, paying for 1200 billboards in the US and 2000 worldwide announcing the big day.

The last time Harold went down this road, he specified September 1994 as the date of the rapture. Like all false end time prophecies, he found a handy excuse and is back for another bite at the apple. This time he knows he’s right, predicting a series of earthquakes beginning next Saturday in Indonesia that will then, over the succeeding five months, culminate in the total destruction of the world on 10.21.11. Oh, and the rest of the universe as well. (Did anybody tell them?)

Given the long history of  failed end time prophecies, it is fair to ask: Is there is any corroborating evidence? At RaptureReady.com, we find that its Rapture Index, a gauge of developments in 45 categories ranging from “False Christs” to “Floods,” is flashing red lights all over the place, reaching an all time high. (But let it not be said that the owners of the site are without compassion for the damned. One of its sponsors does sell Earthquake Survival Kits, which presumably come with a minimum five month warranty.)

One of RaptureReady’s featured pastors is John Hagee, who also has his own considerable following.  Here’s what the site says about Hagee’s take on the imminence of the rapture:

In God’s Two-Minute Warning, Pastor Hagee confidently states, “I believe that we have arrived at the “two-minute warning” on God’s clock. Unlike the players in a professional football game, we do not know how much time we have left.”

Ah, but Camping does. And if we had to guess, the Hagees aren’t taking any chances and will be ready for the big day.

Just how many Americans believe in the rapture and its immanent arrival? According to Chip Berlet of Political Research Associates,  30-40% of the American population do, while 15% of the total population think it will happen in their lifetime.

Chip Berlet on the Rachel Maddow Show last year with the numbers— but apparently the youtube account of this video was raptured up and ain’t comin’ back.

It remains to be seen whether the M$M will give Camping and his prophecy much coverage these next seven days. But if we had to hazard a guess they will, given their penchant for capitalizing on disaster stories. After all, this would be the greatest disaster story ever told. And the size of the fundamentalist Christian demographic is nothing to sneeze at. MSNBC’s Lawrence O’Donnell did cover it on his show Thursday night, going so far as to offer his personal guarantee that the world come Sunday morning of next week, the world will still be here. However, in the interest of full disclosure, it should be noted that his show is titled The Last Word.…

Meanwhile, we thought we’d try our hand at the prophecy thing. We were surprised at what we found and have prepared the following news article.  Remember: You heard it here first.

WASHINGTON, [Spureeus News] — A large segment of the world’s estimated two billion Christians are no longer among us.

“The aliens came like thieves in the night,” reported Pentagon spokesman Hymen Feith, an orthodox Jew. “Apparently, they were abducted by a vast fleet of extraterrestrial spaceships that suddenly appeared in the skies yesterday evening through a previously undetected wormhole over the Arctic.”

“We were facing a severe labor shortage on our world,” explained the Alien Commander Flybotz from the planet Rove. “Our previous work force, er, …expired,” he added, after consulting his translator’s thesaurus.

Using the troposphere as a massive projection screen, the Rovians put on a stunning audio visual holographic light show, backed up by a horn section to die for.

“I was particularly proud of the customized fiery chariots” beamed Production Designer Zybok, describing the evacuation vehicles used to transport the rapturees into the spaceship cargo holds.

Asked what his most difficult challenge was, he replied: “Getting them to don their rapture helmets. They were skeptical at first, but after we explained to one of their leaders, a Rev. Hagee, that the helmets were necessary to attenuate the blinding light from their new halos, they readily agreed.”

Commander Flybotz said they were even now enjoying their hyperspace jump back to his home world. “We produced a special inflight movie to keep them happy. Actually, they think it’s a real time satellite feed of the fate of those Left Behind. I don’t want to spoil the ending, but the denouement involves Muslims, giant meat hooks, homosexuals, Urantia Book readers, and a vast burning lake of sulfurous fire.”

When queried about the rapturees’ human rights, Koblotz replied: “Oh, on Planet Rove we believe in democracy. We plan to allow them to vote just as soon they understand what is in their own best interests.”