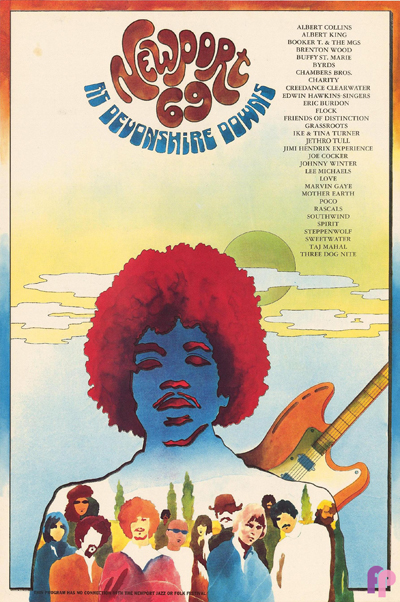 Had he lived, Jimi Hendrix would have turned 69 last week. I wrote a post titled Happy Birthday, Jimi  a couple of years ago, summarizing my thoughts, feelings, and experiences of the man and his turbulent times.

I mentioned that I had seen Jimi perform live in 1969 at what was billed as The Newport ’69 Pop Festival in Northridge, CA. As far as I know, the video below is the only AV record of that performance in existence. Not to be missed is the second song featuring the incomparable Buddy Miles on drums and vocals.

(Last week in Don’t Sprays Me Bro I wrote: “It’s been some 40 years since I last referred to a police officer as a “pig.” Raised with a healthy respect for law enforcement, all that changed radically in 1969 when I witnessed an incident of unconscionable police brutality.”  That incident is recounted the first Jimi post linked to above.)

When Jimi famously asked “Are you experienced?”  I interpreted that vis a vis  my own encounter with what Hindu mystics might call Brahmajyoti , or “the effulgence of God.”  I was 18 at the time, tripping on some very good acid on a beach on the Olympic Peninsula in Washington. Suddenly, it was as if every pore in my skin, every atom in my body was radiating a different hue of pure, impersonal energy. Simply lifting my arm felt as if I could hurl the Rock of Gibraltar into space.

Later, after some serious religious self-study that included Buddhism,  a short stint in a Hindu monastery, books like Autobiography of a Yogi, The Impersonal Life, and The Urantia Book,  I formulated that experience  in spiritual  terms as the realization of that “True Light that lights everyone who comes into the world”;  in metaphysical terms as experiencing the human body as a literal ” Temple of God”;  in cognitive terms as  “me experiencing God experiencing me.”

So, Jimi, I would have to answer: Yes, I have been experienced…

Here again is part of what The Urantia Book says about music:

The best music of Urantia is just a fleeting echo of the magnificent strains heard by the celestial associates of your musicians, who left but snatches of these harmonies of morontia forces on record as the musical melodies of sound harmonics. Spirit-morontia music not infrequently employs all seven modes of expression and reproduction, so that the human mind is tremendously handicapped in any attempt to reduce these melodies of the higher spheres to mere notes of musical sound. Such an effort would be something like endeavoring to reproduce the strains of a great orchestra by means of a single musical instrument….

[O]nly once in a thousand mortal lives is there any great appreciation of harmonics. But be not discouraged; some day a real musician may appear on Urantia, and whole peoples will be enthralled by the magnificent strains of his melodies. One such human being could forever change the course of a whole nation, even the entire civilized world. It is literally true, “melody has power a whole world to transform.” Forever, music will remain the universal language of men, angels, and spirits. Harmony is the speech of Havona.