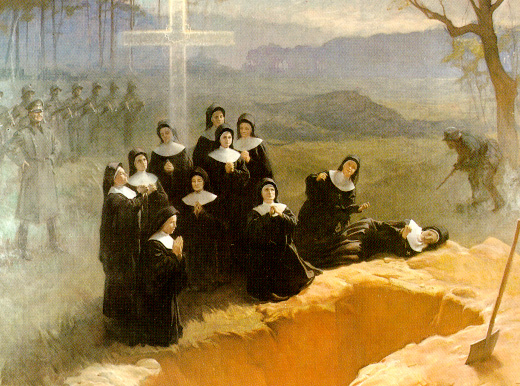 The Blessed Martyrs of Nowogródek, 11 nuns killed by the Gestapo in 1943*

Picking up where we left off in Playing The Hitler Card In The War On Women: Nun Edition, two senior NY Times columnists, Nick Kristoff and Maureen Dowd, joined forces Sunday to tag team the Vatican over its treatment of the women who represent the essence of Christ’s teachings about social justice and service to the poor.

I’m speaking of course of the Church’s tireless cadre of nuns who have renounced everything for the opportunity to serve their Lord, currently being held hostage by the Church’s male elders who claim to exclusively know his will. (In contrast, of course, to those uppity women ascetics who are otherwise helpless to ascertain that will on their own.)

Underscoring the role these courageous women have played in the two millennia of Christendom, Kristoff reminds us that:

They are also among the bravest, toughest and most admirable people in the world. In my travels, I’ve seen heroic nuns defy warlords, pimps and bandits. Even as bishops have disgraced the church by covering up the rape of children, nuns have redeemed it with their humble work on behalf of the neediest…

In effect, the Vatican accused the nuns of worrying too much about the poor and not enough about abortion and gay marriage.

What Bible did that come from? Jesus in the Gospels repeatedly talks about poverty and social justice, yet never explicitly mentions either abortion or homosexuality. If you look at who has more closely emulated Jesus’s life, Pope Benedict or your average nun, it’s the nun hands down…

“How dare they go after 57,000 dedicated women whose median age is well over 70 and who work tirelessly for a more just world?” [Catholic theologian Mary E.] Hunt wrote. “How dare the very men who preside over a church in utter disgrace due to sexual misconduct and cover-ups by bishops try to distract from their own problems by creating new ones for women religious?”

Who thinks it’s cool to bully nuns? While continuing to heal and educate, the community of sisters is aging and dying out because few younger women are willing to make such sacrifices for a church determined to bring women to heel.

Yet the nuns must be yanked into line by the crepuscular, medieval men who run the Catholic Church.

“It’s not terribly unlike the days of yore when they singled out people in the rough days of the Inquisition,” said Kenneth Briggs, the author of “Double Crossed: Uncovering the Catholic Church’s Betrayal of American Nuns.”

How can the church hierarchy be more offended by the nuns’ impassioned advocacy for the poor than by priests’ sordid pedophilia?

The Urantia Book weighs in on the problematic nature of social justice:

Jesus worked, lived, and traded in the world as he found it. He was not an economic reformer, although he did frequently call attention to the injustice of the unequal distribution of wealth. But he did not offer any suggestions by way of remedy. He made it plain to the three that, while his apostles were not to hold property, he was not preaching against wealth and property, merely its unequal and unfair distribution. He recognized the need for social justice and industrial fairness, but he offered no rules for their attainment.

Thus, no pre-ordained magical formulas for making social justice a reality. Only a call to action, for us fallible mortal to work out the evolutionary particulars. Methinks the Sisters have made a good start, and are for the most part, getting it right.

Kristoff sums up the political moment:  So, Pope Benedict, all I can say is: You are crazy to mess with nuns. . . . 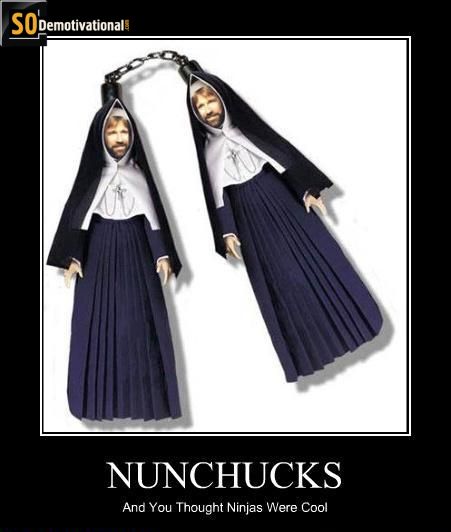 And I’ll say again what I said in that earlier post: You go, Sisters. I’ve got your back.