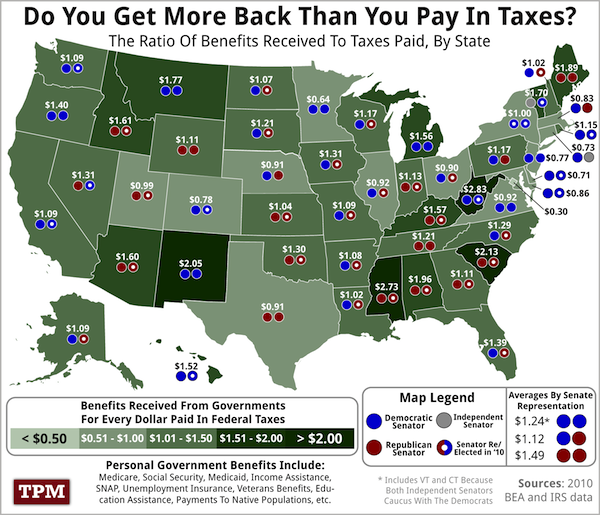 Just over a week ago, the New York Times ran an eye-opening story about a key paradox in U.S. politics: It turns out the biggest critics of federal spending — Republican base voters — are some of the biggest beneficiaries of the social safety net.

Expand on that irony, and you’ll find that some of the most conservative states in the country are the greatest beneficiaries of transfer payments — where residents pay on average less in taxes than they receive in federal benefits. Not all “taker” states are red, and not all “giver” states are blue.

But the color spread on the map below suggests that many Republican base voters either choose to vote against their economic self-interest, or would be stunned if the members of Congress who represent them ever got their way.

Another point of national cognitive dissonance: for all the hype and anger about soaring deficits, all the green and dark green on the map illustrate how severe the implications of balancing the budget too rapidly would be.

On a related note, from Prof Cole today:

States with fewest Passports most Opposed to Obamacare 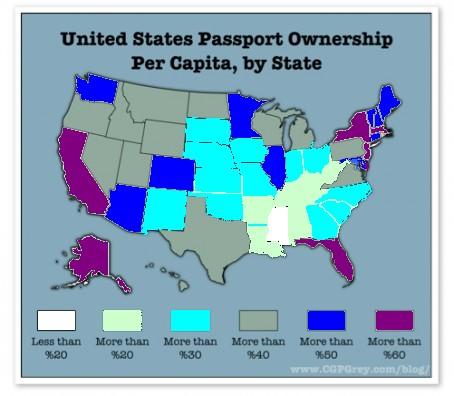 Only about one third of Americans have passports, and if it weren’t for the post- September 11 requirement that one travel to Canada and Mexico on a passport, it would no doubt be an even smaller proportion. (Hence the high number of passports in states with large Latino populations). But take Latinos out of the equation, and which states are cosmopolitan is pretty clear. Lack of experience with the world seems to track pretty closely with strong opinions about how to deal with the rest of the world. It also tracks with socially reactionary views.

From The Urantia Book

The greatest twentieth-century influences contributing to the furtherance of civilization and the advancement of culture are the marked increase in world travel and the unparalleled improvements in methods of communication. But the improvement in education has not kept pace with the expanding social structure; neither has the modern appreciation of ethics developed in correspondence with growth along more purely intellectual and scientific lines. And modern civilization is at a standstill in spiritual development and the safeguarding of the home institution.