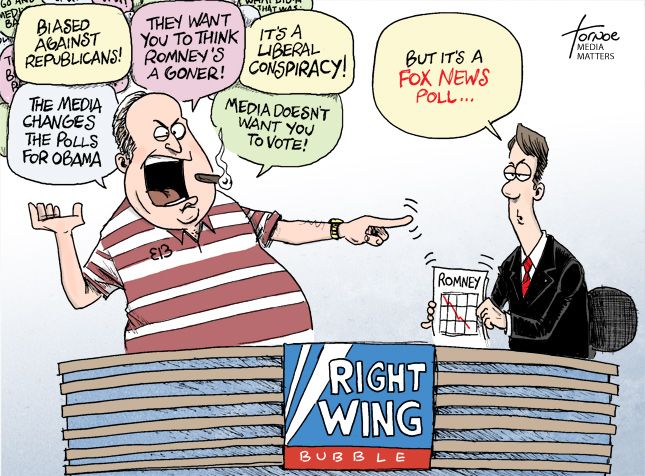 “Never get high on your own supply.” —Notorious Big.

When the polls started turning up for Obama and the down ticket  Dems after the DNC convention, the GOPers dismissed it as a “sugar high.”  Some high octane sugar, that.  Obama now leads in all nine swing states, each outside the margin of error. Worse for Team Romney, the internals showed a double digit drop in the number of people saying the country is on the wrong track.  Obama’s favorability ratings have now risen to the crucial 50% level.  Romney’s pick of Paul “Voucherize Medicare” Ryan to be his Veep has hurt him in the crucial senior demographic.  And Obama now leads on the question of who is the better candidate to improve the economy, formerly Romney’s greatest strength.  While the post-convention bounce could have been explained away as a short term effect, the political impact of the leaked 47% vid has unmistakably bent the arc of the campaign towards Obama and the Dems,  leaving the Rethugs flailing around for a new narrative spin.

Enter one Dean Chambers, an obscure right wing blogger who claims to have scientifically “unskewed” the polls by eliminating a presumed oversampling of the number of Democratic respondents. Presto change-o —  Romney actually enjoys a substantial lead. (For an analysis of why Chambers’ methodology sucks,  see this article from TPM, featuring a critique from the former champion of GOP leaning pollsters, Scott Rassmussen himself.) Citing what is rapidly becoming known as the “Poll Truthers” movement, ThinkProgress  reports that:

Rush Limbaugh also outlined the pollster conspiracy on his radio show: “They’re all Democrats. They’re all liberals. They just have different jobs. The polls are the replacement refs. They see certain things. They don’t see other things. They don’t call certain things, and other things go by. In this case, what they’re trying to do is exactly what they’ve done in your case: frustrate you, make you pull your hair out, say, what the hell’s happening to the country? They want you thinking the country’s lost. They want you thinking your side’s lost. They want you thinking it’s over for what you believe. And that makes you stay home and not vote. That’s what they’re hoping.”

Limbaugh, while doing his best to rally his troops, is thus planting the seeds of a post-election narrative that blames the liberal media and their co-conspirators in the pollster business. Jason Linkins and Elyse Siegel over at HuffPo write that there is a longer term goal, with a clever Catch-22 hook:

I would offer a third possibility:  that the Rethugs  are seeding a post-election rationale to be employed after they steal the election:  “See, there was polling precedent that showed Romney was winning all along.”  I’m not ready to abandon that possibility just yet, given their track record in the 2000 and 2004 presidential elections.  (See, e.g., former DNC communications spokeswoman and current MSNBC political analyst Karen Finney‘s repeated warnings about same.)  But for now I am more intrigued by Billmon‘s analysis over at the Big Orange titled, “Skewed polls and the paranoid style” (the latter phrase being an homage to Douglas Hoffsteader‘s 1964 classic essay, “The Paranoid Style”).

The most striking feature of the current right-wing obsession with “skewed polls” is that it combines two of modern conservatism’s most pronounced tendencies:  A complete rejection of empirical reality, and a deep conviction that said reality is in fact a conspiratorial plot by the enemies of America (a.k.a. the liberals) to poison public opinion— to win through deception what they cannot achieve openly.  Memories of the right’s insistence that all was going well with the bloody occupation of Iraq are hard to avoid— likewise the manufactured “debate” over the causes and consequences of global climate change, the imaginary role of ACORN and the Community Reinvestment Act in the subprime mortgage meltdown, and just about every other instance in which conservative ideology has had to come face to face with the cold, hard facts of life.  In each case, the knee-jerk conservative response to inconvenient (and unfriendly) truths has been to mimic Adam Savage’s line from Mythbusters:  “I reject your reality and substitute my own.”  Except Adam was being ironic.  They are not.

The “complete rejection of empirical” reality and substituting a different one was, of course, enshrined in the political universe when a Bushian political operative, widely believed to be Karl Rove, told author Ron Suskind:

The aide said that guys like me were “in what we call the reality-based community,” which he defined as people who “believe that solutions emerge from your judicious study of discernible reality.” … “That’s not the way the world really works anymore,” he continued. “We’re an empire now, and when we act, we create our own reality.  And while you’re studying that reality— judiciously, as you will— we’ll act again, creating other new realities, which you can study too, and that’s how things will sort out. We’re history’s actors… and you, all of you, will be left to just study what we do.”[2]

One of the more striking features of the contemporary conservative movement is the extent to which it has been moving toward epistemic closure. Reality is defined by a multimedia array of interconnected and cross promoting conservative blogs, radio programs, magazines, and of course, Fox News. Whatever conflicts with that reality can be dismissed out of hand because it comes from the liberal media, and is therefore ipso facto not to be trusted. (How do you know they’re liberal?  Well, they disagree with the conservative media!)  This epistemic closure can be a source of solidarity and energy, but it also renders the conservative media ecosystem fragile. Think of the complete panic China’s rulers feel about any breaks in their Internet firewall:  The more successfully external sources of information have been excluded to date, the more unpredictable the effects of a breach become.  Internal criticism is then especially problematic, because it threatens the hermetic seal.  It’s not just that any particular criticism might have to be taken seriously coming from a fellow conservative.  Rather, it’s that anything that breaks down the tacit equivalence between “critic of conservatives and “wicked liberal smear artist” undermines the effectiveness of the entire information filter.  If disagreement is not in itself evidence of malign intent or moral degeneracy, people start feeling an obligation to engage it sincerely— maybe even when it comes from the New York Times.  And there is nothing more potentially fatal to the momentum of an insurgency fueled by anger than a conversation.  A more intellectually secure conservatism would welcome this, because it wouldn’t need to define itself primarily in terms of its rejection of an alien enemy.

There simply is no getting around the fact that the mentality of the modern grassroots conservative movement is in almost all particulars the spitting image of a 20th century totalitarian political party— an “epistemically closed” loop of self-reference and self-delusion.  In other words:  a cult.  The upshot is that one of America’s two main political parties has managed to turn itself into the proverbial insane asylum run by the inmates. . .  But for most sane (or at least semi-sane) people, there comes a point where you realize you’ve lost the thread and have to back up a bit— and maybe enter rehab.  But epistemic cults have no such corrective mechanisms.  They never go in reverse, never question their own assumptions, and most of all never ever admit error.  Their belief systems are too fragile.  Break the gestalt, even in one place, and the entire edifice may come crashing down.  Which may explain why totalitarian cults that actually achieve unchallenged state power usually end up astonishing the world not just with their barbarity, but with the sheer zaniness of their thinking.  They can’t stop themselves from taking their obsessions to the ultimate extreme.

But life will become a burden of existence unless you learn how to fail gracefully.  There is an art in defeat which noble souls always acquire;  you must know how to lose cheerfully;  you must be fearless of disappointment.  Never hesitate to admit failure. Make no attempt to hide failure under deceptive smiles and beaming optimism. It sounds well always to claim success, but the end results are appalling.  Such a technique leads directly to the creation of a world of unreality and to the inevitable crash of ultimate disillusionment.