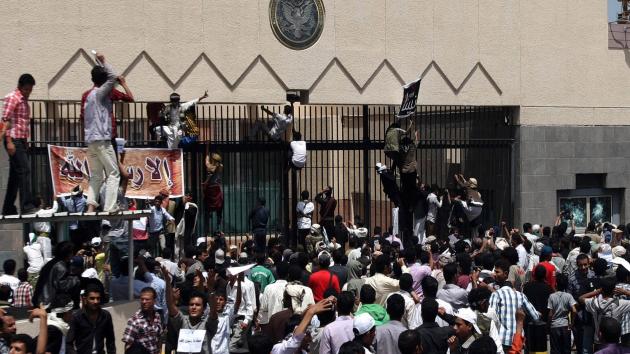 Protesters laying siege to the US Embassy in Yemen

Not to diminish the seriousness of the conflict currently gripping the Middle East in response to the release of the Islamophobic film “Innocence of Muslims,” but the guy who is responsible for it is, in addition to being a neocon Clash of Civilizations bomb throwing knuckle dragging jerkwad, just another convicted felon way in over his head.

From The Daily Beast:

When the film premiered this summer, it seemed more likely destined for the dust bin than infamy. The premiere was a bust, with less than a dozen people attending. Among them was the man who would later identify himself to news outlets as the film’s maker, Sam Bacile.

The director didn’t watch his creation the night of the premiere. Instead, he sat by himself at a nearby restaurant, staring intensely at the theater [@ Hollywood and Vine], the law enforcement source told The Daily Beast. What he didn’t know was that he was being watched by officers. “You are monitoring the people in the area for behavioral characteristics, and he was displaying them. Normal people don’t act like that. He was across the street, on the opposite side of the block, so he could view what was going on. He was sweating and focusing in on the entrance. He was watching what was going on around and who was going in,” the source said.

The officers approached the man, who looked to be in his mid-40s or 50s, and he introduced himself as the director of the film.

This week, the director was busy introducing himself to various news outlets as Sam Bacile. He told The Wall Street Journal he was a 52-year-old Israeli real-estate developer in California, and that he had made the film with $5 million raised from 100 Jewish donors. He said he made the movie, which depicts the Prophet Muhammad as a womanizer, pedophile, and homosexual, because “Islam is a cancer.”

Doubts about Bacile’s identity began to surface after the film’s consultant, Steve Klein, told another news organization that “Bacile” was a pseudonym and that he was not Jewish or Israeli. Klein, an insurance agent in Hemet, California, said the money used to finance the low-budget flop came from a mixed bag of donors, including Middle Easterners, Jewish people, Christians, and former Muslims.

Klein, who spent the majority of yesterday giving interviews to local television and print reporters, has a dubious background himself. The Southern Poverty Law Center, which wrote about Klein and his affiliation with a California extremist evangelical group called Church at Kaweah that is said to have roots in the militia movement, noted Klein once bragged about leading a “hunter-killer” team as a marine in Vietnam…

By late Wednesday, the hunt for the “real” Sam Bacile was pointing in yet another direction. The Associated Press published another story, this time reporting that Bacile is most likely 55-year-old Nakoula Basseley Nakoula, a California Coptic Christian convicted of federal bank fraud charges. In 2010, he was ordered to pay more than $790,000 in restitution, and sentenced to 21 months in federal prison. Nakoula told the AP that he was involved in the film and said he knew Bacile.

Shades of convicted bank fraudster Ahmed Chalabi, who bamboozled the former Bush Administration into invading Iraq. But I digress.

After some of the actors in the film were located yesterday, the players issued a joint statement claiming they were duped by the man who called himself Sam Bacile. One actress who had a small role in the film, Cindy Lee Garcia, told Gawker that she thought she was appearing in another film about ancient Egyptians, supposedly titled Desert Warriors, and that the offensive anti-Muslim dialogue was dubbed during the post-production of the film. Garcia said the man who claimed to be Bacile told her he was from Egypt, and spoke Arabic to some of the “dark-skinned” cast members.

“The entire cast and crew are extremely upset and feel taken advantage of by the producer,” read the statement from the actors. “We are 100 percent not behind this film and were grossly misled about its intent and purpose. We are shocked by the drastic rewrites of the script and lies that were told to all involved. We are deeply saddened by the tragedies that have occurred.”

One has to wonder if Msrs. Klien and  Nokula won’t soon receive a visit from Mr. Doherty’s former Seal team mates, just to clear the air and all.

One has also to consider the karma associated with trying to foment World War III— Reverend Terry Jones, I’m talking to you— which has just become more likely, coming to a Middle East near you.