“… former Republican Party leader Rep. Tom Davis this week observed that “the Republican brand is in the trash can. . . if we were dog food, they would take us off the shelf.”

So distressed at Barack Obama’s successful “Change” theme, the Repugs have tried to claim some of that turf as their own with their new campaign slogan—”Change You Deserve.” Unfortunately for them, that is the trademarked advertising slogan for the anti-depressant Effexor, used to treat generalized anxiety disorder, social anxiety disorder, and panic disorder in adults. (Who said that the Most Highs don’t have a sense of humor?)

Nearly two years later, we did a followup titled Teh Crazy Poll, which cited a number of poll derived metrics pertaining to Obama Derangement Syndrome [ODS],  concluding with this:

“Bruce Bartlett, Deputy Assistant Secretary for economic policy at the U.S. Treasury Department during the George H.W. Bush Administration, gets the last word. In his post yesterday titled Why I Am Not a Republican:

“I can only conclude from this new poll of 2003 self-identified Republicans nationwide that between 20% and 50% of the party is either insane or mind-numbingly stupid.” 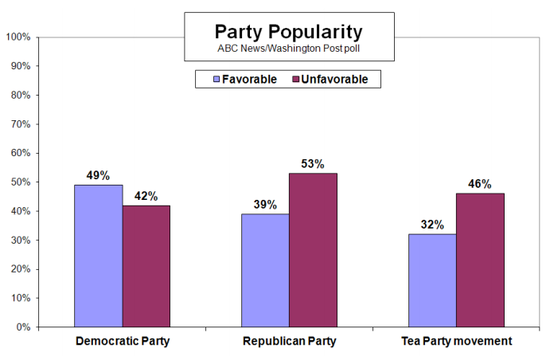 Joan sums it up as follows:

“The favorability ratings for both the GOP and the tea party are totally underwater, with just 39 percent approving of the GOP and 32 percent liking the tea party. Among self-identified party members, Democrats have a five-point edge over Republicans in favorability, 89 percent of Democrats are positive, versus 84 percent of Republicans. And here’s where it gets interesting.

The difference is that 32 percent of Americans in this survey identify themselves as Democrats, vs. 25 percent as Republicans, levels that have held essentially steady the past three years. That’s down for the GOP, which achieved parity with the Democrats in 2003 but has lost ground since. (Independents now predominate, accounting for 39 percent in this survey.)
Intensity of sentiment is another challenge for the Republican Party: Substantially more Americans see it “strongly” negatively than strongly positively, 33 percent vs. 18 percent, while the Democratic Party breaks even (28 percent on both sides).