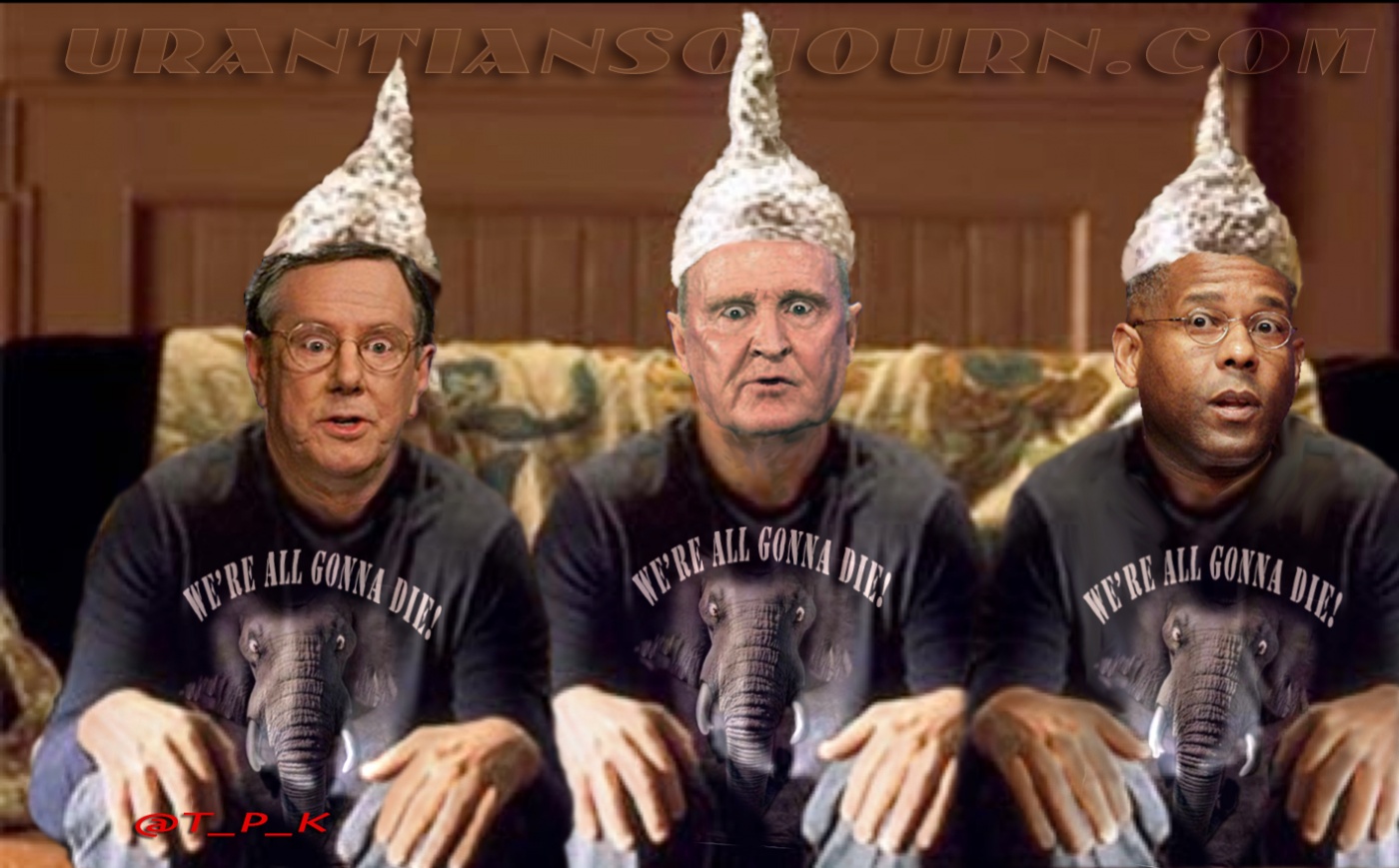 Sasquatch might as well have traipsed across the White House lawn Friday with a lost Warren Commission file on his way to the studio where NASA staged the moon landing. – Yahoo News

In the wake of a laughable GOP convention and an uplifting Democratic one, followed closely by the devastating disclosure of the Romney 47% moocher vid, polls showed Obama opening up a significant lead over Romney in the swing states, with favorable down-ticket results for the Democratic senate candidates as well.

This gave rise to the skewed polls conspiracy in which Wingers howled about a cabal of biased poll takers and librul media-ites working overtime to discourage Republican voters from showing up to vote.  As if their overwhelming hatred of President Blackenstein (h/t Bill Maher) wasn’t motivation enough.

The angry peasant mob hadn’t even made it to the White House Castle gates to vent their latest outrage when they were hit by yet another thunderstorm of cognitive dissonance, the September job numbers.  What the rest of the country welcomed as much needed rain during a long economic drought, the Wingers saw as a devastating flood that swept away one of their major talking points— unemployment over 8% during the entirety of the Obama Administration, proof that that Obama’s 2008 campaign pledge to lower the rate below 8% was as bogus as his current proposals and promises.

Now, there is always a certain amount of fluctuation in the final numbers of most economic metrics, such as GDP, which routinely undergoes two modifications after initial estimates are made. The uncertainty in estimating unemployment numbers is reflected in the divergent numbers provided by the two main data sets used for their calculation—monthly polling by the Bureau of Labor Statistics of some 50,000 households, the Household Data survey; and numbers provided by a list of employers, the Establishment Data survey. The Household Survey showed that for September “Total employment rose by 873,000”; and the Establishment Data showed “Total nonfarm payroll employment increased by 114,000.” (Employment Situation News Release, October 5, 2012,  Bureau of Labor Statistics)

The smaller number in the Establishment Data is likely due to the fact that during an economic recovery, new employers are missed in monthly surveys that coincide with accelerations in the rate of recovery.  This was the case in September, which more fully accounted for rises in the July and August numbers.  Similarly, the slowdown in GDP in the second quarter caused a downward revision in the employment numbers for those months.  In general, underestimations are more common in uptrends, overestimations more common in downtrends, because of the inherent time lag factor. All of which creates an unavoidable, structural margin of error that necessitates subsequent revisions.

The spread between last month’s rate of 8.1% and this month’s 7.8% can thus be explained without resorting to wild conspiracy theories.  But in the GOP zeitgeist, the imagined presence of sinister Democratic plots plays into the larger narrative of Winger victimhood. How else to explain that despite their imagined superiority they don’t have total control of the US government?  And why current polls shows them to be the losers that they are?

That September’s unemployment number came in under 8% is proof of a diabolically engineered October Surprise, a deliberate manipulation of BLS data whose minions are acting on the orders of Obama’s re-election machine, identified by former GE Chairman Jack Welch in a tweet as “these Chicago guys.” Asked by Chris Matthews whether he had any proof, Welch admitted he had none, and insisted he wouldn’t change a single word of his tweet.

Prior to the conspiratorialists’ hijacking of the debate, the GOPers explained that the decrease in the unemployment rate is due to a number of factors;  an increase in part-timers (often a preliminary to full time employment); lazy people content to live off “free stuff,” like unemployment insurance;  and people who have simply given up because the economic outlook is perceived as being so dismal. (Never do we hear from the Willardites, or the MSM for that matter, about the 7,600 Baby Boomers who turn 60 every day, the traditional retirement age, but are still counted as individuals no longer looking for work.)

But the tin foil hat crew, aka Job Truthers, has broken new ground.  Conn Carroll, the Washington Examiner’s senior editorial writer, tweeted that while he didn’t think that the BLS cooked the numbers, it was rather the case of  “a bunch of Dems [who] lied about getting jobs.”  The implication being that the Free Stuffers are an integral part of the poll skewing conspiracy, who hope to re-elect Obama by making the employment picture look rosier than it is, just to keep those checks a-comin’.

Now, all this could be passed off as just so much election year craziness, of no consequence after Nov. 6.  But with public trust in government already at a modern low, assailing the reputation of a critical government agency like the BLS, composed of career economists who have a history of serving both Republican and Democratic administrations in an exemplary, non-partisan manner— that is the real danger here.

TPM describes the BLS and its operations as follows:

For starters, the Bureau of Labor Statistics isn’t currently run by a political appointee.  For most of Obama’s term, the commissioner was a holdover appointed by President Bush.  The current acting commissioner John Gavin is a career BLS economist, not an Obama appointee.

The underlying data behind the BLS reports is also publicly released and used by analysts across the private sector and academia, meaning a conspiracy would have to survive scrutiny from trained economists of all political stripes.

Nor is there much time to cook the books at the top level if they wanted to.

Even if the Rethugs manage to lose this year’s election through sheer foot-shooting incompetence, they can point to success in their long range goal of undermining the public’s trust in government, as well as their trust in “facts.”  Their previous strategy of obstructionism and polarization is being augmented this election cycle by attacking the credibility of previously unassailable government institutions, as well as vital private and public polling agencies.

Even if they lose, they win.

Or so they think.

UPDATE (10/9):  Wacky Welch out at Reuters and Fortune Magazine.

Welch said he will no longer contribute to Fortune following critical coverage of the former CEO of General Electric, saying he would get better “traction” elsewhere. On Friday, Welch suggested that the Obama administration, calling them “these Chicago guys,” had manipulated the monthly jobs report in order to make the economy look better than it actually is just weeks before the election. Welch has been battered by criticism since making the suggestion on Twitter.

Aw, another poor, picked upon billionaire.