The party that lost the last four out of five national elections, and whose electoral tent accommodates racists, misogynists, neocons, gun nuts, social Darwinists, plutocratic sociopaths, and nativists of the Know Nothing Party stripe, is setting out to rebrand itself as— wait for it— a party of populists.

“We are a populist party” declared Louisiana Governor Bobby Jindal, during a speech last Thursday to the Republican National Committee in Charlotte, N.C.

Jindal, a leading contender for the 2016 GOP presidential nomination, said of Teh Party of Stupid:

“We must stop being the stupid party.“

Good luck with that. You would think that after getting their butts kicked during last November’s national elections over issues like women’s reproductive rights, health care reform, and disaster relief, they would begin the 2013 legislative session with a lessons learned attitude. You’d be wrong. On the issue of women’s control over their own bodies, no less a party leader than Paul Ryan, who Charlie Pierce has christened “the zombie eyed granny starver,” co-sponsored another “personhood” bill.  Feminst.org reports:

“Conservative Congressman Paul Ryan (R-WI), along with 16 other representatives, have co-sponsored the “Sanctity of Human Life Act,” which would give full person rights to a human embryo. The “Sanctity of Human Life Act” was originally introduced in 2011 by Representative Paul Broun (R-GA). Broun reintroduced the bill early in the new congressional session. The bill establishes that “the life of each human being begins with fertilization, …, at which time every human being shall have all the legal and constitutional attributes and privileges of personhood.” The bill extends this protection even to any “one-celled human embryo.”

The practical effect would make abortion not only illegal but a federal civil rights crime.  On the state level,  Teh Stupid is taking even more bizarre turn.

Should a recently introduced bill in New Mexico become law, rape victims will be required to carry their pregnancies to term during their sexual assault trials or face charges of “tampering with evidence.” Under HB 206, if a woman ended her pregnancy after being raped, both she and her doctor would be charged with a felony punishable by up to 3 years in state prison: Tampering with evidence shall include procuring or facilitating an abortion, or compelling or coercing another to obtain an abortion, of a fetus that is the result of criminal sexual penetration or incest with the intent to destroy evidence of the crime. Sexual assault trials are infamously grueling for survivors, who are often subjected to character assassination and other attempts to discredit their accounts. State Rep. Cathrynn Brown’s (R) bill would add the forced choice between prison or an unwanted pregnancy to these proceedings.

Apparently, rape kits are so expensive in New Mexico that it is cheaper to test for the rapist’s DNA by bringing a baby to term than it is to test his sperm gathered at the time of the crime.

Republicans have been trying to repeal the Affordable Care Act since it was passed. The last time was in July 2012. That was the 33rd attempt. Today, Congresswoman Michele Bachmann tweeted this:

At noon today, I introduced the first bill of the 113th Congress to repeal Obamacare in its entirety.

After the July vote, CBS News calculated that upwards of 89 hours had been spent tilting at this ridiculous windmill to the tune of something in the area of $50 million.

On the issue of disaster relief and the broader issue of anthropogenic climate change, not only has the House dragged its feet on providing urgently needed emergency funds for the victims of Hurricane Sandy, they want to prevent the EPA from even thinking about regulating the Koch Brothers and the rest of the fossil fuel extraction industries by reintroducing a bill from last year’s session.

From Mark Sumner at Daily Kos:

To amend the Clean Air Act to prohibit the Administrator of the Environmental Protection Agency from promulgating any regulation concerning, taking action relating to, or taking into consideration the emission of a greenhouse gas to address climate change, and for other purposes.

That’s about as clear as it can be, but just to restate for those still shaking off the shock, it was a bill to make it impossible for the EPA to do anything about greenhouse gases. Not just to keep the EPA from levying any sort of theoretical fee on carbon emissions, but to stop the EPA from even thinking about the climate.

Paul Krugman sums up the Rethug dilemma neatly in his column Monday, showing that for all its attempts to worm itself back into the heart of the American electorate, and to make its rhetoric sound less crazy, the best the GOP can hope for is a triumph of form over substance:

…prominent Republicans have begun acknowledging that their party needs to improve its image. But here’s the thing: Their proposals for a makeover all involve changing the sales pitch rather than the product. When it comes to substance, the G.O.P. is more committed than ever to policies that take from most Americans and give to a wealthy handful…

Like the new acknowledgment that the perception of being the party of the rich is a problem, this represents a departure for the G.O.P. — but in the opposite direction. In the past, Republicans would justify tax cuts for the rich either by claiming that they would pay for themselves or by claiming that they could make up for lost revenue by cutting wasteful spending. But what we’re seeing now is open, explicit reverse Robin Hoodism: taking from ordinary families and giving to the rich. That is, even as Republicans look for a way to sound more sympathetic and less extreme, their actual policies are taking another sharp right turn.

So far this month, the House Rethugs have agreed to kick the debt ceiling issue down the road for 90 days. Upcoming, they must confront a previous episode of can-kicking,  the humongous budget cuts of the  2011 sequestration law scheduled to take effect March 1. Then they must somehow forge next year’s budget, which will spur demands for a fundamental rewrite of the entire tax code.  Also too, they will likely be dealing with legislation from the Senate concerning immigration, gun control, and climate change. Meanwhile, the party sappers, those tactical engineers who can’t be bothered with all this bothersome policy and messaging nuance nonsense, are busy rigging the electoral machinery to produce future victories that defy the will of the electorate.

Unable to win the last two presidential elections, even with the help of unlimited corporate spending and undemocratic voting restrictions, Republicans are now trying to change the rules of the game again. They clearly won’t let a sense of shame stop them from rigging the next presidential election. The only thing that will stop them is widespread public outrage. Last year, their blatant efforts to change voting laws to keep students, minorities and low-income people from voting backfired in a major way, as those who saw their right to vote threatened took extra care to exercise it. Under this new scheme, it won’t matter how many Americans turn out to vote. The winner will be chosen before the first vote is cast. These Republican politicians may not take our democracy seriously, but most American voters do. The GOP will have to learn that if they can’t win elections the honest way, they aren’t going to win at all.

You know how low they’ve sunk when the only sane sounding man in the room claims to have exorcised a demon from his girlfriend in college;  made it legal to bring guns to church; and instituted the largest school voucher program in the country so that kids can learn all about earth’s 9,000 year history from the Bible. (This latter educational innovation presumably has the full support of Paul Broun, who sits on the House Science and Technology Committee and has determined that evolution is “lies from the pit of hell.”)

The GOP has a bigger problem than just messaging and policy fails.  It has a problem with reality itself. 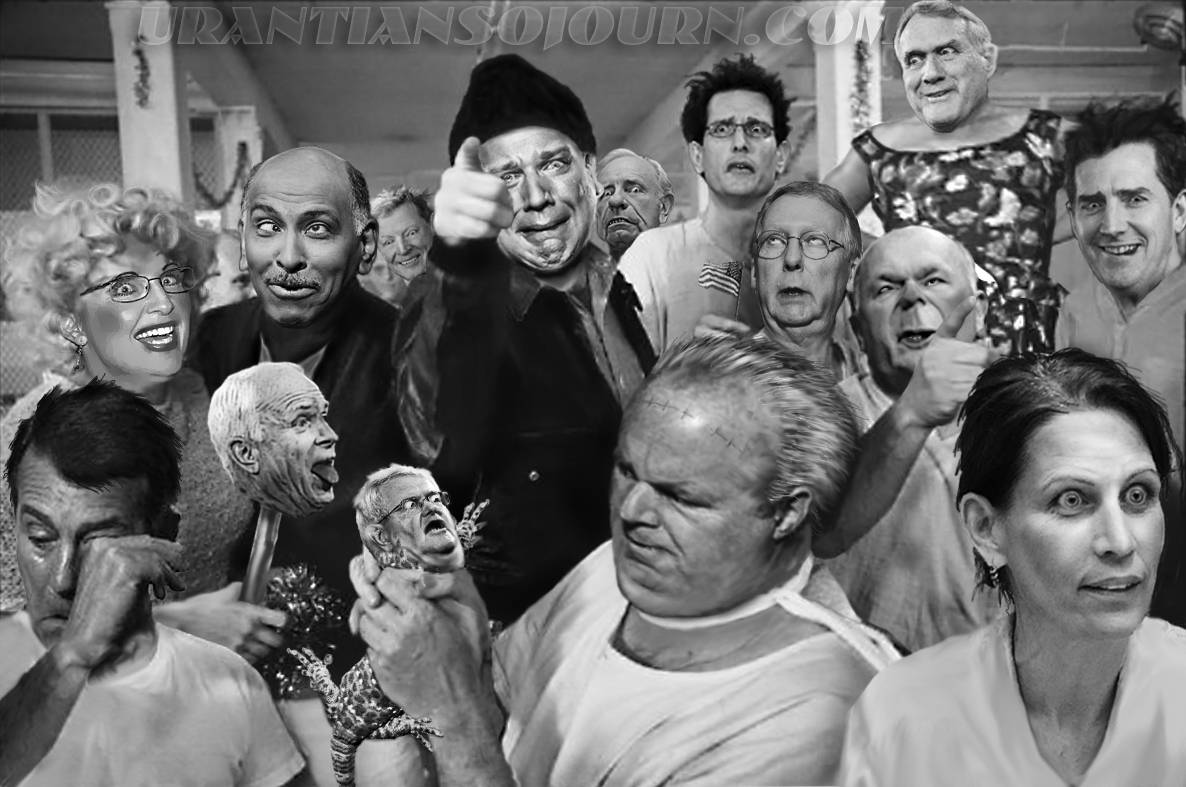