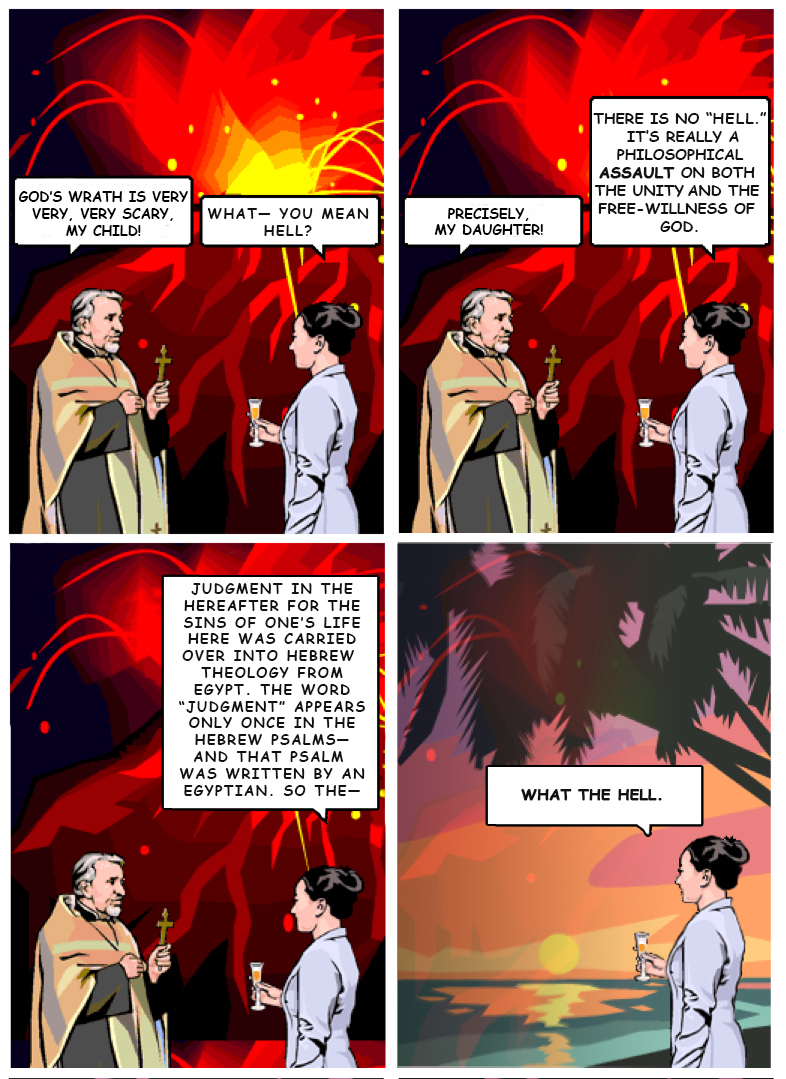 There are all those thousands of supposedly rational people who still believe that the all-loving, all-merciful, all-knowing God they profess belief in, maintains a gigantic universal “Lake of Fire,” at enormous expense, too, and probably available on the heavenly Celestial Cable base package under “entertainment,” which has endless close-ups of flesh melting off bodies, with a roar of continuous agonizing screams.  Yeah, boring.

On second thought, that would be a living hell.  You know, one of their own making.  But there is no material place called Hell.

Mm, okay, there is the brain-box of Rush Limbaugh’s enormous head, that’s gotta be pretty close to a living hell, but he’s also gotta be really close to death, too. . . let’s just say there’s no eternal material place called hell.

Shit.  Yeah, you’re right, there’s the idea of hell too, and that’s probably the most vivid and powerful form of hell that there is, really;  and you might be surprised to learn that it isn’t kept alive by just the fundie-mentalists either.  There are many weak-minded atheist trolls who, while claiming to know there is no hell (good so far) still insist on helping to keep the idea of hell alive by continually bringing it up whenever and wherever they can, in an effort to prove— get this— how dumb fundamentalists are.  The irony— it burns all the way to the center of the earth.

Hmm.  Well yeah dammit, the center of the earth must be a lot like the childish ideas of hell, too.  So if you could actually get there without having to become a resident, maybe like, just get a visa to have a look around, in a totally fire-proof suit.  I mean if you’re going to imagine an insane place like hell to begin with, it might be instructive to speculate on just how insane an imaginary hell is.†

Which raises the question, are people chained up?  Does their charred crispy flesh get rejuvenated every hour or something, so they can feel the pain all over again?  Whoa, are there even hours??  What good is punishing fleshbots if they aren’t conscious of the passage of every last freaking second they’ve been burning to a cinder?

Do they eat, or sleep?  Are there restaurants?  I knew a place called Hell’s Half Acre, over near the White Castle on Cook Street;  they had some seriously incendiary chili;  makes my face sweat just thinking about it.  But yeah, this is stupid.  Of course it would just be about pain and suffering, right?  Because. . .  INFINITE MERCY!

Okay, to be fair, if there’s infinite mercy, there’s also infinite wisdom.  Infinite wisdom then, must be the eternal arbiter which determines the proportions of justice and mercy, which would be meted out in any given circumstance.  So the greatest punishment for deliberate rebellion against the government of God would be your loss of existence as an individual subject of that government;  in the last analysis, it’s clear such individuals have actually destroyed themselves— by becoming wholly unreal through their own willful choice of iniquity.

And when this self-sentence is finally confirmed, the being instantly becomes as though he had not been.  There’s no resurrection from such a fate;  it is everlasting and eternal.*

So say it with me now:  THERE IS NO HELL.  Stop talking about it.  Stop lending strength to that which you wish to be free from.  Ignore those who still believe such a backward idea.  Stop wasting your time with them, and use every second you have left figuring out how you can live forever, under, shall we say, more pleasant circumstances.

*  “The living energy factors of identity are resolved by the transformations of time and the metamorphoses of space into the cosmic potentials whence they once emerged.  As for the personality of the iniquitous one, it is deprived of a continuing life vehicle by the creature’s failure to make those choices and final decisions which would have assured eternal life. When the continued embrace of sin by the associated mind culminates in complete self-identification with iniquity, then upon the cessation of life, upon cosmic dissolution, such an isolated personality is absorbed into the oversoul of creation, becoming a part of the evolving experience of the Supreme Being.  Never again does it appear as a personality;  its identity becomes as though it had never been.”    —The Urantia Book:  The Nature Of God;  Justice And Righteousness

†  Damn.  I should also mention, you know, for the hell of it, that the Jewish traditions of heaven and hell and the doctrine of devils in the Hebrew scriptures, while they were founded on the lingering traditions of Lucifer, were principally derived from the Zoroastrians during the times when the Jews were under the political and cultural dominance of the Persians.  Zoroaster, like the Egyptians, taught the “day of judgment,” but he connected the event with the end of the world;  not some hell hole of fire waiting at the end of this life for all the evil boys and girls.  Just sayin’.