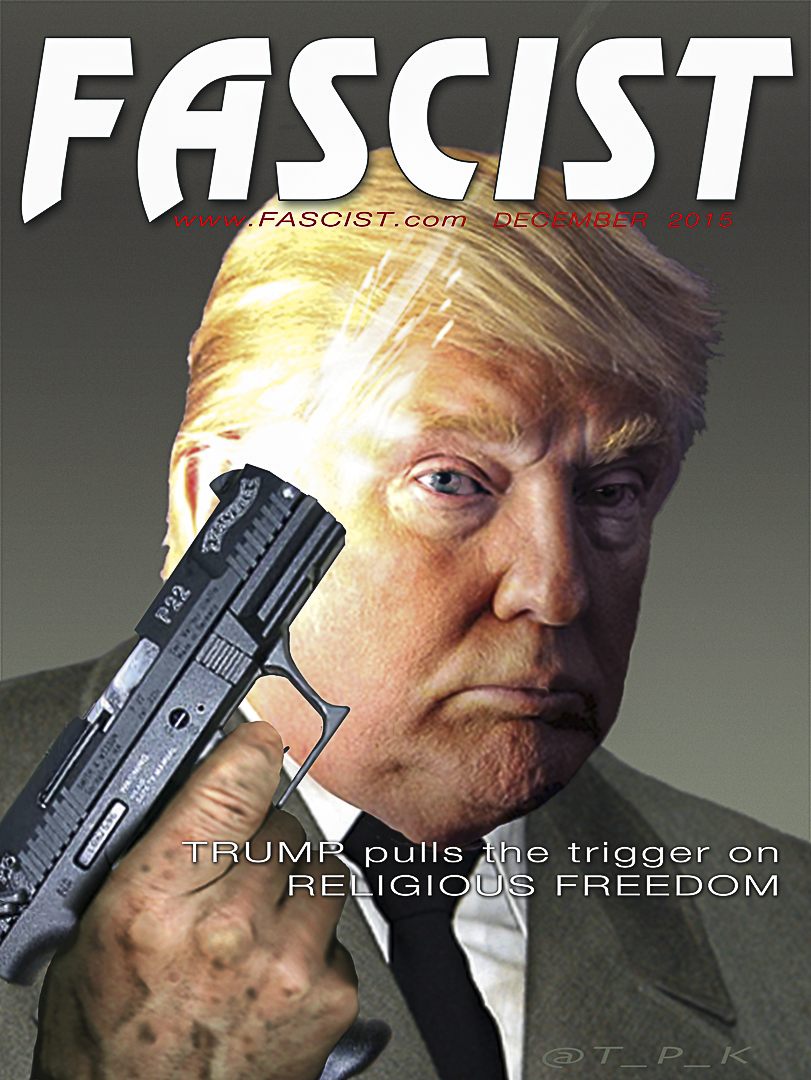 “We’re going to have to do things that we never did before. Some people are going to be upset about it, but I think that now everybody is feeling that security is going to rule.”
— Donald tRump

Betty’s Pie Whole is the last place on earth that you would expect to find a copy of FASCIST magazine. It’s strictly a place for stuffing delicious pie into one’s pie hole.  That’s it.  So finding this cover of FASCIST staring up at me from a booth seat was sort of like finding a piece of fresh ‘n gnarly roadkill stuck to a church pew;  emphasis on “pewww.”

But there it was.  And being me, the power of peww compelled me, and I picked it up.  As you can see, the cover is, well, Damaging.  If I have to explain that, you wouldn’t understand.  I started paging through the Mag after ordering a strawberry-rhubarb pie, to find Trump saying, “We’re going to have to do things that we never did before. Some people are going to be upset about it, but I think that now everybody is feeling that security is going to rule.”  He’s right; I’m upset; he’s ruining my pie fest, and my country.

Yesterday, Trump apparently refused to say how his Muslim “registry” would be different from the Nazi’s policy of forcing Jews to register. The New York Times:

When asked how a system of registering Muslims would be carried out — whether, for instance, mosques would be where people could register — Mr. Trump said: “Different places. You sign up at different places. But it’s all about management. Our country has no management.’’

Asked later, as he signed autographs, how such a database would be different from Jews having to register in Nazi Germany, Mr. Trump repeatedly said, “You tell me,” until he stopped responding to the question.

Public Policy Polling completed just yesterday found that 27% of likely Republican primary voters support shutting down all mosques in the U.S.  Just 38% said they opposed the idea, and 35% were too busy searching for their own butt to even answer.

So Ima have to get back to you on this, after I read the mag, drink some wine, and I have some pie to finish;  but I’ll tell you this.  I’m already intellectually apoplectic over Trump‘s comments, and just forget about Carson‘s comparison of Syrian refugees to rabid dogs.  These nut jobs have already ruined the holidays, not to mention the next year of our lives.  Bet on it.

Fear mongering is like sex for Republicans, and they just can’t get enough of it.  I think it’s  absolutely time to bring the hammer* down on their little we we’s… there’s no place for this shit in America.

Let’s start with a few facts.

Trump was pressed on the idea of a registry by an NBC News reporter Thursday evening while the candidate campaigned in Iowa. Asked if there should be a database system for tracking Muslims in the United States, Trump said, “There should be a lot of systems, beyond databases.”  The reporter asked if that was something Trump would put in place as president. Trump replied: “I would certainly implement that.  Absolutely.”

Trump also told the reporter that Muslims would “have to be” registered and said that the registration process could occur at “different places.”

So let the weaseling begin.

In an interview on Fox News Channel on Friday evening, Trump tried to clarify his position. “I want a watch list for the Syrian refugees that (President Barack) Obama‘s going to let in if we don’t stop him as Republicans,” he said.

As “Republicans”;  not Americans. Because Americans don’t play that shit.

Trump has also voiced support for closing certain mosques as a way to contain the terrorist threat in the U.S.

The House passed legislation this past week essentially barring Syrian and Iraqi refugees from the United States. Senate Majority Leader Mitch McConnell, R-Ky., has slotted the bill for possible Senate consideration, though it’s unclear whether the chamber could get enough votes to override a threatened veto by President Barack Obama.

The Republican candidates’ unified criticism of Trump was striking.

His rivals have vacillated in how they have handled other inflammatory comments from Trump, apparently wary of alienating his supporters while increasingly concerned that he has held his grip on the race deep into the fall.

Marci Hamilton, a Yeshiva University legal expert on religious liberty, said requiring Muslims to register appears to be a clear violation of the Constitution’s protection of religious freedom.  “What the First Amendment does and what it should do is drive the government to use neutral criteria,” Hamilton said. “You can use neutral criteria to identify terrorists. What it can’t do is engage in one-religion bashing. That won’t fly in any court.”

Democratic front-runner Hillary Rodham Clinton, at a Tennessee rally Friday evening, said, “Mr. Trump has attacked Mexican immigrants, he’s attacked women, and now he’s attacking Muslim Americans. At some point you have to ask yourself, is that the kind of country we are?”

One of those comments actually gets right to the point.

Ohio Gov. John Kasich said requiring people to register with the federal government because of their religion “strikes against all that we have believed in our nation’s history.”

See?  At least one Republican is able to state the obvious.

Ben Carson, the retired neurosurgeon who has challenged Trump‘s lead in the GOP race, said the U.S. should have a database on “every foreigner who comes into this country,” but he rejected the idea of tracking U.S. citizens based on their religion.  “One of the hallmarks of America is that we treat everybody the same,” he said. “If we’re just going to pick out a particular group of people based on their religion, based on their race, based on some other thing, that’s setting a pretty dangerous precedent.”

Because, picking out a particular group of people— “foreigners”?  “…based on their religion, based on their race, based on some other thing”— some thing like, say, being immigrants, or refugees, who don’t want their children to die in a senseless war—  “…that [is] setting a pretty dangerous precedent.”  Could his soft-pedaling of racism and bigotry as “setting a pretty dangerous precedent” be meant to ease the shock of America’s actual values on the Republican base, who Carson and Trump are depending on to win the nomination?

Perhaps.  But Fuck that.  Any candidate—Republican or whatever— willing to take a dump on our values for political gain, for fear of the “foreigner”— must, as the seer of old said—  pass away. And I say, good riddance.