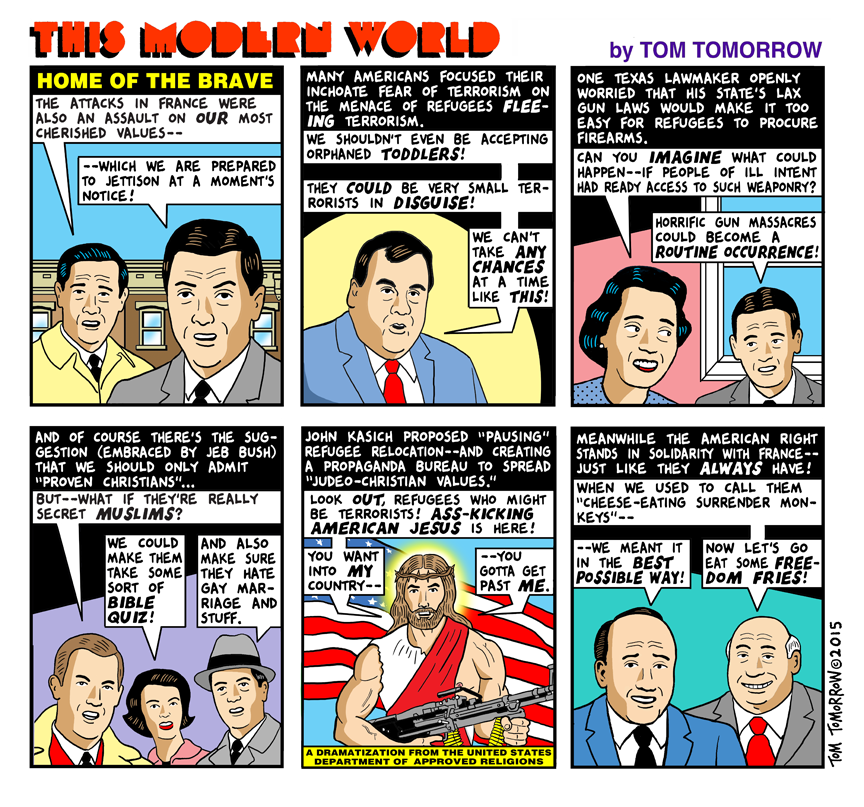 Over 150,000 US citizens have been killed by gun violence since 2001, five times the amount killed by terrorists. But thanks to the NRA, who opposes restricting the sale of semi-automatic rifles to individuals on the terrorist watch list, the gap is likely to decrease. According to that radical leftie rag, The New York Post:

More than 2,000 people on the FBI’s terrorist watch list legally purchased weapons between 2004 and 2014, a Government Accountability Office report says. The roughly 700,000 people on the list are still allowed to buy firearms — though felons and drug addicts are not.

Cutting to the chase: The NRA, arguably the most powerful legislative lobbying group in the US, makes the terrorist mission easier. No need to smuggle in weapons over the borders–plenty of military style assault rifles out there ready for the buying.

Of course, Daesh/ISIL/ISIS  and other terrorists won’t be coming into the US disguised as Syrian refugees, the vast majority of whom are young moms and kids and orphans. Refugees spend up to two years of heavy vetting, waiting to get into the country. Or to put it another way, waiting to escape the very terrorists that cause so many ‘Muricans to wet their beds at night, judging by the fear based rhetoric they regularly ingest and spew.

Nope, real terrorists (in contrast to imagined ones) can simply enter the US through the front door bearing a valid passport or visa. Already, there are an estimated 5,000 European nationals who have traveled to conflict zones in the Middle East, where they have presumably received some military training. They can simply hop aboard a plane along with tens of millions of tourists, businessmen, and students that legally enter the US every year.

So, don’t look for terrorists to be carrying weapons as they deplane. More likely they’ll be carrying large fruit baskets with Thank You cards addressed to the NRA’s Wayne LaPierre.

If the faith of the Most High has entered your heart, then shall you abide free from fear throughout all the days of your life. Fret not yourself because of the prosperity of the ungodly; fear not those who plot evil; let the soul turn away from sin and put your whole trust in the God of salvation. The weary soul of the wandering mortal finds eternal rest in the arms of the Most High; the wise man hungers for the divine embrace; the earth child longs for the security of the arms of the Universal Father. The noble man seeks for that high estate wherein the soul of the mortal blends with the spirit of the Supreme. God is just: What fruit we receive not from our plantings in this world we shall receive in the next.”