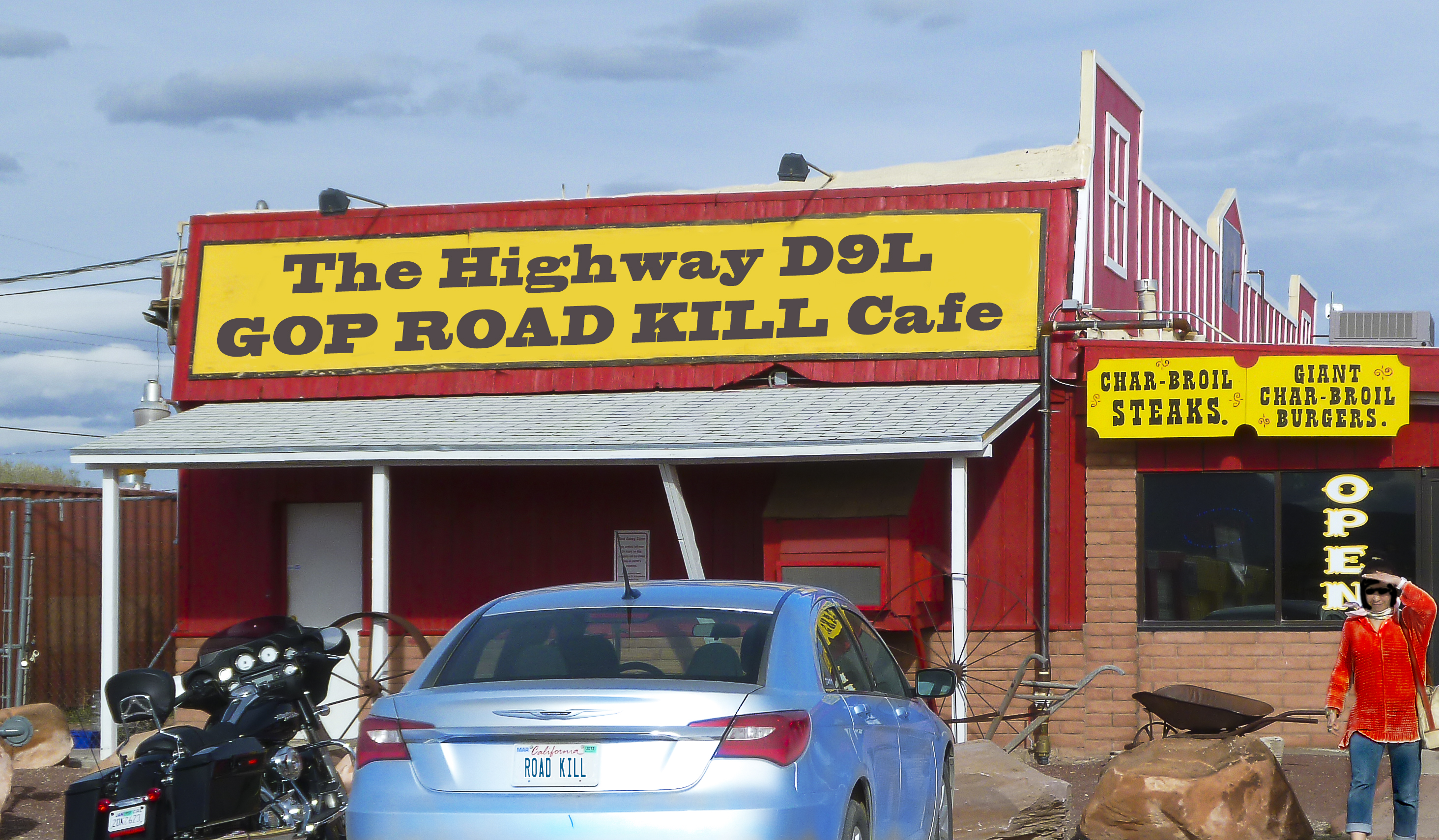 Serving up GOP Goodies at the Legendary Roadkill Cafe

In Part 1 of the Dunning-Kruger effect, we introduced some of the findings of cognitive scientists David Dunning and Josh Kruger that explains why some people are incapable of recognizing their own incompetency and stupidity. Additional examples litter in the US political landscape like so much cognitive roadkill. For instance, over at the Big Orange, RET III writes about a particularly pernicious species of GOPer denial:

We are witnessing a sort of collective Republican denial where they cannot accept that they are not the ruling party, not the “deciders” (to use a former president’s phrase)…What is important here is not that Republicans object to the limits of their power, but that Republicans apparently cannot accept that such limits even exist.  Greg Sargent [of the Washington Post] recently caught this in a very revealing FOX News poll:

[Republicans] failed to block Obama’s transformation of the country; that must be because they didn’t even try, so they must be complicit. But this failure, too, is structural. Republicans don’t have the votes to surmount Dem filibusters or Obama vetoes. The idea that this can be overcome through sheer force of will (the argument conservatives are making in favor of another shutdown fight) is just another version of [the “Big Lie”].

Indeed, the Fox News poll unwittingly captures what is particularly problematic about this last one. It finds that 60 percent of Republicans feel betrayed by their party, and that 66 percent of Republicans don’t think their party did all it could to block Obama’s agenda. The poll asks why respondents think their party leaders failed at this: they didn’t really want to stop Obama; they weren’t smart enough; they would rather fight each other. The Fox poll doesn’t even offer respondents the option of choosing the real reason — that Republicans structurally lack the votes!

If anyone ever needed an example of how leading questions can be structured in propagandistic polls to produce a desired result, one need look no further than this example from Fux News. But that’s a topic for another day.

RET III also cites Jonathan Chait about the base’s disenchantment with the GOP:

This discontent runs much deeper and wider than Boehner. . . Boehner had the misfortune of leading, or attempting to lead, his party in an era when it had run up to the limits of crazy, where the only unexplored frontiers of extremism lay beyond the reach of its Constitutional powers.

Ah, “the limits of crazy.” To quote a man who should appeal to survivalists and militia members everywhere, author of Resistance to Tyranny, former Air Force Col. (Ret.) Joseph P. Martino, writes:

To paraphrase Dunning-Kruger: Fools lack the tools to recognize their foolishness.  The alternative to this lack of self-awareness is to blame someone else for their failures, like that secret Muslim-Kenyan commie illegally occupying the White House. Naturally, this illegal occupation trope is being sold to the gullible as a promise by certain GOP presidential candidates to repeal every piece of legislation, every executive order, signed into law by our illegitimate president. Because freedom!

George W. Bush: The Man Who Didn’t Know His Limitations

“A man’s got to know his limitations“- Dirty Harry Callahan, Magnum Force

If historians need an example of the consequences of the failure of a 21st century power player to recognize his own limitations, George W. Bush is their man. Bush’s eminence grise, Dark Dick Darth Cheney, originally charged with finding a vice presidential candidate for future president Bush, recognized  Bush’s cognitive deficiencies early on. Opportunity knocked and Cheney answered, recommending himself for, and ultimately receiving, the job.

As a substitute father figure (Cheney was George H.W. Bush‘s trusted Secretary of Defense), he was in an ideal position to exploit “the Decider” for his own gain. No doubt Cheney used his one-on-one weekly Wednesday lunches with Bush to tell him what a freaking political genius and leader he was (the inestimable Charlie Pierce refers to Bush as”C+ Agustus); and to suggest various policy positions, like say, invading Iraq. The latter was an obvious manipulation of Junior’s daddy issues: What better way to supplant his father than by correcting his “mistake” in not deposing Saddam when he had the chance?

During the first Gulf War, Cheney had advised against overthrowing Saddam Hussein, knowing full well the disaster that would ensue. However, as Junior’s VP, he changed his mind. At the very first meeting of his national security team in early 2001, Bush blew off warnings from his terrorism adviser, Richard Clarke, about the threat posed by al-Qaeda. (Clarke was President Clinton’s terrorism chief and thus represented continuity on the subject between the two administrations.) Instead, Bush asked what it would take to overthrow Saddam. A few months later, he ridiculed  a CIA briefer for a memo he presented  titled: Bin Laden Determined To Strike in US , dismissing him by saying “You’ve covered your ass, now.” Five weeks later, nearly 3,000 Americans died in the infamous 9/11 attacks.

After the destruction of al-Qaeda’s main base of operations in Afghanistan in November of that year, Bush got his wish. Preparations were made to invade and occupy Iraq, despite there being no evidence that Saddam had anything to do with the 9/11 attacks. Concurring were Secretary of Defense, Donald “Henny Penny” Rumsfeld, who had complained  “there aren’t any good targets in Afghanistan. And there are lots of good targets in Iraq“; his Deputy Secretary of Defense Paul “the war will pay for itself” Wolfowitz a leader of the neocons who had been trying to get rid of Saddam for years; another neocon, Under Secretary of Defense, Douglas “stovepipe this” Feith; and of course, Vice President Richard Cheney, former  CEO of  Halliburton/KBR, which just happened to gross over $39 billion from government contracts during the “nation building” phase of the worst foreign policy decision in American history.

Nation building has proven to be a profitable enterprise, a logical extension of , to gthe classic Vietnam war rationalization that America had to destroy the country in order to save it. Too bad that hundreds of thousands of people had to die; that hundreds of thousands more were physically and psychologically maimed; that millions had to flee their homes, becoming permanent refugees; that irreplaceable archaeological treasures were looted or destroyed; that the entire Middle East had to be thrown into turmoil (making Iran a hegemonic power in the process); and that the American taxpayer would incur trillions of dollars of recurring, interest compounding debt. To a psychopath like Cheney, that’s just the cost of doing business. Anyone questioning his war profiteering motive will likely get the same response that Senator Pat Leahy got on the Senate floor when he questioned him about his Halliburton ties, telling him to go “fuck yourself.”

Naturally, such an unprecedented level of presidential incompetence had to be hidden, not only from The Decider himself, but from everyone living outside the White House bubble. Some of the world’s best PR people and spin doctors were put to work casting President Bush as the new. avenging sheriff in town, bringing justice to the world’s terrorist scum, a fusion of Clint Eastwood’s Dirty Harry and High Plains Drifter. (Bush Senior had seriously considered making Eastwood his vice president, so it’s safe to assume that Junior had some familiarity with Eastwood’s characters.)  Hell, if they could make a Vietnam War draft dodger a hero and Swift Boat his medal winning, presidential opponent, they could sell anything.

The fact that Bush ignored warnings of an imminent a-Qaeda attack? Put him on a pile of World Trade Center rubble,  one arm wielding a bullhorn, the other arm draped around an exhausted firefighter, promising revenge. Need to deflect attention from the fact that he had no exit plan after defeating Saddam’s pitifully over-matched military? Put him in a navy jet and land him on the flight deck of an aircraft carrier (anchored just off the coast of San Diego), dressed in a crotch grabbing flight suit that had Chris Matthews gushing over what his guest, G.Gordon Liddy observed made “the best of his manly characteristic.” For a backdrop, add a colorfully dressed deck crew. And behind and above them all, a large, professionally designed and printed banner proclaiming Mission Accomplished. (Bush’s handlers claimed the banner was a spontaneous creation of the grateful, carrier crew. Yeah, right.)

And then there was the all important on-going task of casting Bush as the successor to Republican icon, Ronald Reagan. If Reagan spent his leisure time on a ranch, riding horses and chopping firewood, then George would have to do something similar during his record breaking number of vacations at Crawford, Texas. Only his ranch was fake, with its pre-fab modular home and a total absence of–whadda ya call dem dar critters?– ah yes, horses! Dubya,  a self-confessed “windshield rancher,” eschewed horses, preferring to “ride” a comfy, late model air conditioned pickup truck instead.

In close, we revisit some of the classic cognitive stylings of the man with the room temperature IQ.

Next up in Part III: How President Obama demonstrates a corollary of the Dunning-Kruger effect.