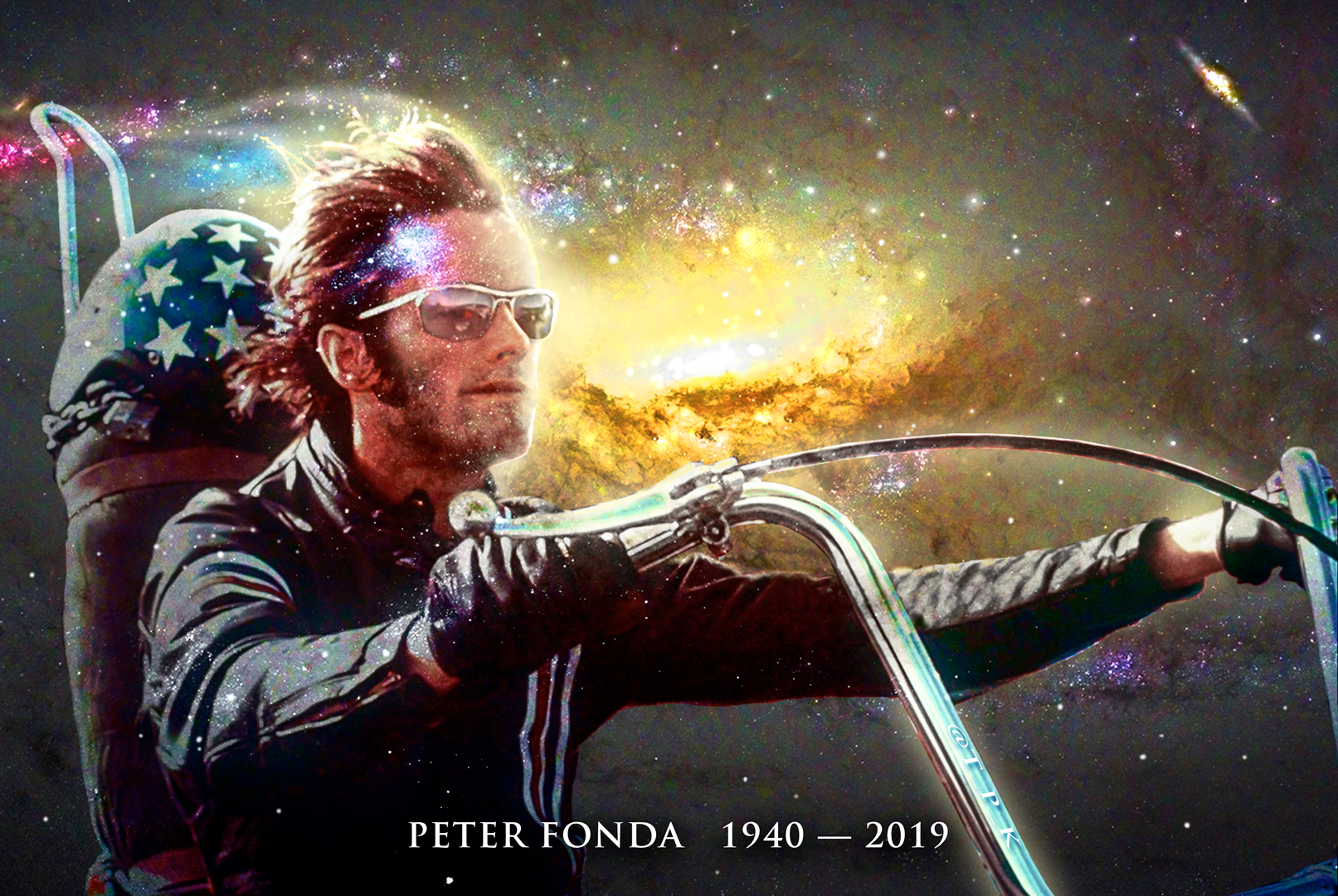 “I never wanted to be anybody else.”
—Wyatt, Easy Rider

You know who he is.

That’s right, Jane Fonda’s little brother.  The one who changed a chunk of our culture with the film, Easy Rider.  There are going to be a lot of articles about him now that he’s ridden off into the future; maybe Dennis Hopper, too.  I’m doing this one out of simple gratitude, for shaping my long relationship with choppers, and perhaps much more.

I made the long flight back from Vietnam to the CONUS in December of 1969. Poignantly, I moved to “Normal,” Illinois, and got into school on the G.I. bill.  That spring I bought a royal blue 500 cc Triumph twin, and started chopping it immediately.  I, along with thousands and thousands of others, had been introduced to choppers by Easy Rider, a bit of cinema that has influenced the culture in ways both good and bad, for the past fifty years.  And for that, I thank him.  He’ll be resting in peace for a bit, but eventually he’ll be riding easy again, in a brand new world.

Back in this world tho, it’s a time to take a look back at where we’ve been.  Easy Rider has had more of an influence over my artistic style than I may understand, and with Fonda’s passing, it’s an opportunity to take another look at just what that is.

Bikes are a different animal. Handlebars were the first thing I changed on my bike.  “Z” bars were new in the early seventies, at least in Normal.  The aluminum bar struts that replaced the shocks were intended to lower the bike and look tough, but they damn near broke my butt and maybe my lower spine.  I hand-painted the stars with a brush, because well, blue tank.  And my rep; I was an art major. And off to school we go.

The following spring, someone made me an offer I couldn’t refuse.  I sold the bike, and a green ’63 Volkswagen beetle with Big Daddy Roth slicks and Cragar mags on the back, to a guy who said he had to have them both.  I grinned and took his cash, but by the end of the week I had forked it all over for a low-mileage ’66 XLCH.

That was 1971.  And that was a crazy summer.  “You know I smoked a lotta grass. Oh Lord!  I popped a lot of pills. But I never touched nothin’ that my spirit could kill.”  (Got to know several women who liked to ride on choppers as much as I did, too.)  Hell, you could pay the rent, buy food, drugs and beer, and still afford to build a chopper and date a girl— all on a decent factory summer job paycheck. Huzzaaa.

“You know, this used to be a hell of a good country.”
—George Hansen, Easy Rider

Meanwhile, towards the end of that June, Senator Mike Mansfield‘s amendment was adopted by Congress. It urged withdrawing American troops from South Vietnam at “the earliest practical date.”  It was the first time in U.S. history that Congress had actually called for the end of a fucking war.

The 8″ over fork tubes came next, with a new spooly spoke wheel; cause, we doan’ need no stinkin’ front brake; we lookin’ cool and we be indestructible.  That winter, I painted the tank and fender in the basement, with a cheap badger airbrush running off a CO2 bottle.

I really wasn’t into God then.  I hadn’t even learned how many of my high school buddies had been killed in Vietnam yet.  But I greatly respected and admired Michelangelo’s work, especially his face of God from the Sistine Chapel.  I drew the panels on either side of the tank with pencil, one in black and white, the other in psychedelic purples.

It turned out that a guy that would one day become the best man at my wedding became a roommate about then, and he rode a sweet little XLH with an emerald green paint job.  There’s nothing but corn and soybeans for miles in every direction around Normal, but we rode the shit outa that restless tar. . . 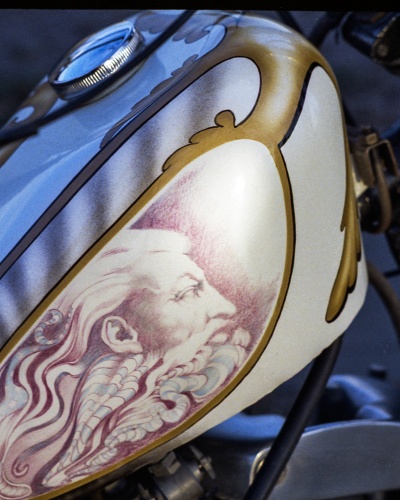 So the bike reminiscence is for some historic perspective on my personal two-wheeler journey.  But. It’s really never been about choppers, Easy Rider, or even Peter Fonda.  It’s about the journey— and making the journey last— forever.

It took me decades to learn that all that matters is the experience of living this life, and that relationships with people are ends in themselves.  The rest is mostly just scaffolding.  If you aren’t continuing the eternal journey, you got nothin’.  It’s a choice we all get to make.

Sure, I love riding a chopper on a fresh morning with perfect air, warm sunshine; watching the headlight bounce down the night highway with a thousand points of light overhead. Even the periodic bug in the face. And my curiosity is always on fire for whatever the next iteration of all that is, farther down eternity road.  I’m all in.

In October, 1971, Australia and New Zealand decided to withdraw their troops from Vietnam. And by the end of October, the total number of American troops still in Vietnam dropped to a record low of 196,700.  By December of the following year, my whole world would change forever; but that’s a blog about as long as book, a book that. . . well.

So.  Peter Fonda launched a cultural shift that has made it into the 21st century, although it is hardly recognizable.  You can still watch Easy Rider as way to at least partially reboot your brain, as I did before I started this blog.  But it didn’t really work the way I thought it would, as so many things stuck out as weird or time-worn;  except he seemed to get religion during his acid trip.. . but you really can’t go back.  Time marches on, bla bla bla. But there’s really something to that; we keep moving forward, ever forward, some kickin’ and screamin’, some resigned to it;  some just taken off the planet without so much as a second’s warning.

This time we’re in now, now. . .  now— so often lacks that spark of spirit, that knowing deep inside where you have to find the courage to look before you can see— a recognition that life goes on forever, if you want it, really want it;  no half-assing it.  And Peter Fonda’s passing into the great beyond, the next world of reawakening, is a perfect time to wake to your trip— following eternity road.  Saddle up.