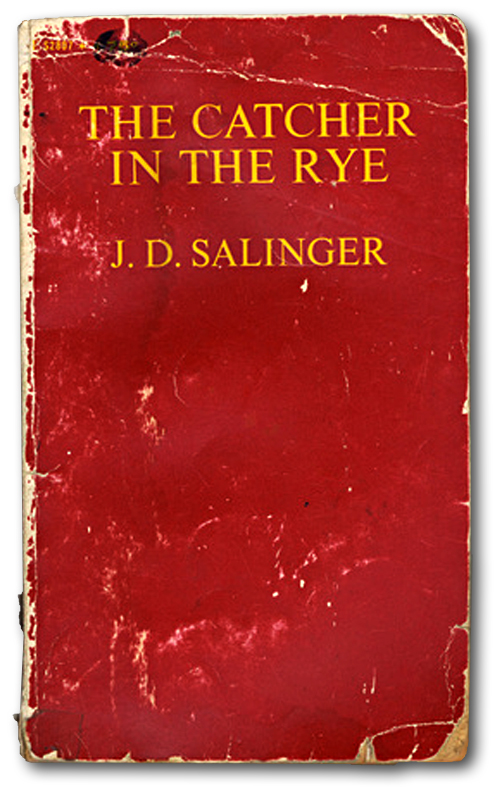 It was nothing I had to do. I think some girl I wanted to maybe go out with told me I should read a goddam book once in awhile if I didn’t want to turn into a poor dumb bastard.  We never actually went out. But I read a book. A book called The Catcher in the Rye.  It turned out that I kind of read the book in the eighth grade, but it was at the request of Sister Thomas Moore, who was some kind of rebel I guess, because there’s a lot of taking the Lord’s name in vain in it. A lot. But it was the first thing I had ever read that made me want to write;  write any goddam thing I wanted.

And now, this J. D. Salinger sport, the author, he up and died.  It sounds terrible when you talk about it.  But it turns out the thing about reading that book was, when you’re all done reading it, you wished the writer— that poor dead Salinger guy— you wished that he was a terrific friend of yours and you could just call him up on the phone whenever you felt like it.  That would be great wouldn’t it?  But now you can’t.  It’s all very sardonic when you think about it.  That poor bastard.

I guess I was just another alienated youth of the early sixties, and that angst-ridden little twerp, that Holden Morrissey Caulfield character, reached into my chest and massaged my heart, made it beat a little faster, and made me feel a little more alive. He also reached into my mind and made me think a little deeper. Not always in a good way, just deeper.  But mostly, it made me want to write.  At the time though, just having that thought made it feel like heresy and betrayal. I had already defined myself in my own mind as a visual artist, and I only used a pencil to draw; if you know what I mean.

But a few years later, I was not a single goddam sentence closer to being a writer.  Instead, I had pretty much been forced to get involved in a goddam WAR.

Now don’t get me wrong. I’m not some flake who is always blaming someone else for questionable stuff that happens to me, but in this case, it was Emmet Conrad Jessberg III’s fault, if you want to know the truth. That’s his real name. Jessburg was one of these three guys I worked with, and all three of them were pretty witty bastards. Coincidentally, not a one of them had ever been in the military; they were just sure that if I got drafted, which could’ve happened any day, or if I joined the Marine Corps with all my high school wrestling buddies— which I was planning on doing— I was going to wind up not ever breathing again, sealed up in a pine box and dead.  (Younger people may not know that I don’t mean drafted like being exposed to a draft of cold air which results in you catching pneumonia or something else that kills you; no, “the draft” I’m talking about was this thing the government had going to make sure they never ran out of enough fresh young soldiers to fight a goddam WAR.  They gave you a number, and   when your number came up, you had a date with the Selective Service — and you had your destiny changed — all in one convenient transaction. They were a bunch of steely-eyed sonsabitches, who maintained information on all of us low information types who were legally subject to “military conscription.”)

So yes: Jessberg assured me the only way I wouldn’t wind up a “miserable-assed grunt patrolling a hell-hole jungle in Vietnam and getting my goddam brains blown out” was to join the Navy. He said it was only natural that a guy like me would be much safer on a ship, and that chances were good I could go to Europe, or Hawaii, or someplace like that.  And he assured me that the ocean was really beautiful.  I had never seen the ocean, but even I, site unseen, could imagine it was a lot nicer than a mosquito-infested goddam jungle.

So through a strange and fortuitous series of events, instead of becoming a writer or a dead grunt, I avoided the draft and became a freshly-minted United States Navy puke; just another poor bastard without a clue in a quaint old uniform headed to a quaint old war zone.  And when I got there I eventually found a government issued ballpoint pen and began to scribble things in a journal. Apparently all that personal discovery was something I had to do, too, because, like immediately, some witty bastard from Lake Charles, Louisiana pointed out that if I expected to become a goddam writer and not some goddam bore, I should always keep a journal.  So I did.

Well, I dug up that journal today, and, mixed in with a lot of pretty embarrassingly whiney stuff about old girlfriends, (I was in Vietnam, for Chrissake) I rediscovered that I had been marooned all night at Clark Air Force Base in the Philippines on December 17th, 1969, trying to get a flight back to the CONUS;  and while I was marooned there I was reading The Catcher In The Rye.

Sitting in Clark Air Force Base Passenger Terminal, the universal aroma of Marlboros
wandering through the scent of everything, and nothing at all.
I’m on my way back home, I think.
—from my Navy Journal

I really goddam hate cigarette smoke.   But I swear to God I was sitting right smack dab in the middle of Marlboro Country™.  The terminal had a visible blue-grey haze that made the whole goddam place smell like some giant smoldering ass.  To make it worse, there was this cheap-looking Christmas shit everywhere.  I am not kidding: Fake frosty pine cones, fake plastic candy canes, fake frosty Christmas trees, and lots of other fake frosty-looking stuff too goddam heinous to put into words.  Meanwhile, penetrating the noxious haze of ass-smoke was this primitively-rendered sound of somebody that sounded a lot like a bad Gene Autry impersonator might’ve sound if he was like, instead of singing Rudolph The Red-Nosed Reindeer, he was actually butchering Rudolph The Red-Nosed Reindeer. I mean in the song, for Chrissake.  And there’s at least a hundred and ten other pukes being forced to listen to this horrible ass-bilge as they’re sitting around in a nicotine stupor and smoking like goddam chimneys, waiting to get outa there.  I know it was precisely one hundred and ten other pukes, because that’s how many pukes were on the waiting list ahead of me— waiting for their goddam chair in the sky back to the CONUS.*

The Navy had owned me and my tired butt for the past 722 and a half days, but now they were finally losing their goddam grip.  My indentured life as a squid was almost finished.  But right then, I was too frustrated to sleep, because my midnight flight had just been delayed 24 hours;  I needed to find something to focus on besides the suffocating smell of fifty million smoldering cigarettes, surrounded as I was by all that shiny aluminum Christmas paraphernalia that littered the whole goddam terminal.  Even the head, for Chrissake.  I’m absolutely certain that baby Jesus would have been crying and gagging nonstop if he had been born in the Clark Air Force Base Passenger Terminal, instead of Bethlehem.  And all because some witty bastard thought if you had enough goddam decorations up every goddam place, some homesick jarhead, some lonely squid, or some Dear John broken-hearted grunt— might look at it for five whole seconds and would suddenly and completely stop missing their mom and dad, their girlfriend, their brothers and sisters, or all the other lucky stiffs who weren’t sitting there in that smoked-up goddam passenger terminal in the middle of the goddam night in the middle of goddam nowhere.

But me?  I was lucky.  I was able to purchase a copy of The Catcher in the Rye at the Andersen Air Force Base terminal on the desolate east end of Guam;  yes, goddam GUAM.  How crazy was that.  It turns out that wasn’t “crazy” at all.  It turns out that a million copies of The Catcher in the Rye are sold every goddam year, and in 1968, there were already seventeen million copies of it floating around, so it wasn’t some fortuitous big deal finding one of them on Guam.  There was probably an entire pallet load of them in the Clark Air Force Base Passenger Terminal storeroom.  I’m serious.

So there I was, trying to stay focused at 3 o’clock in the morning by reading about some fictional malaprop. . . mala. . .  Wait.  No.   I think I mean misanthrope— or maybe a malapropic misanthrope— or a misanthropic malaprop?  Goddammit.
A misanthrope named Holden goddam Caulfield.  It’s probably just because it was something familiar;  something that connected me to home; and my past.
After all, if I remember correctly, Holden Caulfield was locked up.  That poor bastard.  Jesus. . .

¹ Wayne McLaren, who posed for some promotional photographs on behalf of Marlboro in 1976, succumbed to lung cancer at age 51 on 22 July 1992. McLaren was a former professional rodeo rider who appeared in small parts in various television series and movies (primarily Westerns) throughout the 1960s and 1970s, and he modeled for print advertising between acting jobs in the mid-1970s, including a Marlboro campaign in 1976. McLaren, who had a pack-and-a-half a day smoking habit, was diagnosed with lung cancer at age 49. Despite chemotherapy, the removal of one lung, and radiation treatments, the cancer eventually spread to his brain and killed him. After learning he had cancer, McLaren embarked on an anti-smoking campaign that included the production of a commercial, described as follows:

In the powerful TV spot, images of the handsome young Wayne McLaren in a Stetson hat are juxtaposed with shots of his withered form in a hospital bed just prior to his death. His brother, Charles, provides the voice-over and chides tobacco companies for promoting an ‘independent’ lifestyle and asks, ‘Lying there with all those tubes in you, how independent can you really be?’