EDITOR’S NOTE: The continuing exposition of the remarkable, recently discovered account of the crucifixion of Joshua Ben Joseph, aka Jesus Christ, aka, Jesus of Nazareth, aka, the Galilean. . . from the “Daily Matzo,” a parchment rag of circa 30 A.D. Jerusalem, widely distributed around Judea, the only extant copy recently unearthed in a Capernaum coffee and bagel bar known as the “Caperna-ccino.”

JERUSALEM — Early this Saturday morning, Temple guards, on orders from the high priest, acting on a tip from an anonymous source, discovered the torn and shattered remains of one Judas Iscariot, in the near vicinity of the deep and narrow ravine west of the city known to all as the Valley of Hinnom; the dump of all Jerusalem.

First reports indicate it appeared the man had attempted to hang himself from a small tree, but the knot tied in the girdle of his cloak gave way, causing Iscariot to be dashed to pieces on the jagged rocks below.

Daily Matzo has learned Iscariot was the only son of a wealthy Sadducee Judean couple, believed to be living in Jericho. Records indicate Iscariot was born in Kerioth, a small town in southern Judea. He was thirty years of age and unmarried when he joined the apostles in January, A.D. 27. There are unconfirmed reports he had sought employment with a fish-drying enterprise at Tarichea, when he became associated with the Galilean prophet. 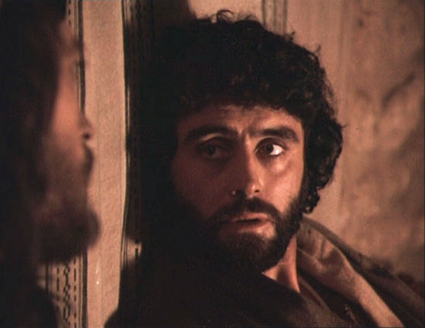 Iscariot was known to be the treasurer of the twelve apostles of Jesus of Nazareth, and is now a person of great interest in the on-going spectacle of the crucifixion of Jesus yesterday morning at Golgatha. Unnamed sources have come forward this day, purporting intrigues involving Iscariot and the temple high priest, Caiaphas.

A source wishing to remain secret, spoke at length with Daily Matzo of Iscariot’s character, having been a life-long acquaintance of the deceased. In an exclusive interview with Matzo, Iscariot was said to be a “spoiled child,” often “pampered and petted.” As he grew up, he had exaggerated ideas about his self-importance. He was widely known as a poor loser.

He was also said to have had loose and distorted ideas about fairness, and was given to the indulgence of hate and suspicion. He was said to be expert at misinterpretation of the words and acts of his friends. “All through his life, Judas had cultivated the habit of getting even with those whom he fancied had mistreated him,” the source confided.

Relatives of Iscariot, who wish to remain anonymous under these circumstances, have revealed that just this Thursday, Judas had disclosed to certain Sadducean friends of his father’s family, that he had reached the conclusion that, while Jesus was a “well-meaning dreamer and idealist, he was not the expected deliverer of Israel.” He went on to say that he would very much like to find some way of withdrawing gracefully from the whole movement.

Iscariot’s relatives also felt his friends had assured him that his withdrawal would be hailed by Jewish rulers as “a great event,” and they led him to believe that he would forthwith receive high honors from the Sanhedrin, and that he would be in a position to erase the stigma of his well-meant but “unfortunate association with untaught Galileans.”

Judas was said to have been troubled however, and confided to kin he could not quite believe that the mighty works of Jesus had been wrought by the power of the prince of devils, as the Sanhedrin believed; but he was fully convinced that Jesus would allow himself to be destroyed by the Jewish rulers, and he felt he could “not endure the humiliating thought of being identified with a movement of defeat.”

Although it is said Iscariot was a good business man, and was generally regarded as a good thinker, he was not always a truly honest thinker. He was known as a stickler for organization.

Associates close to the apostles, whose whereabouts are unknown since the crucifixion, anonymously point to the case of Judas Iscariot as illustrative of the truthfulness of the saying: “There is a way that seems right to a man, but the end thereof is death.”