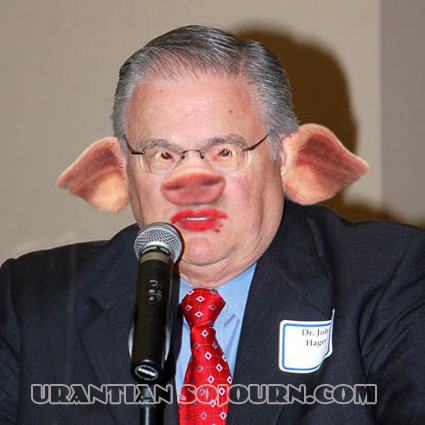 Blogging at the Nation, John Nichols shared the following remarks of radical preacher John Hagee regarding Hurricane Katrina and the city of New Orleans’ “sinful” acceptance of homosexuality:

“What happened in New Orleans looked like the curse of God…” Hagee explained after the city experienced a national disaster that cost at least 1,836 lives – making it the deadliest hurricane in American history – and permanently dislocated tens of thousands of Americans from not just their homes but the communities of their birth and upbringing.

“Hurricane Katrina was, in fact, the judgment of God against the city of New Orleans” Hagee told NPR’s Terry Gross in a 2006 interview. What was God judging? “New Orleans had a level of sin that was offensive to God,” said McCain’s backer, who explained that “there was to be a homosexual parade there on the Monday that the Katrina came.”

Blaming homosexuals for the deadliest hurricane in history is a textbook example of the precepts of Pig Religion in action. This sort of self-indulgent, self-righteous bigotry is the inevitable result of an ignorant and slavish commitment to the fetish word of authority, and has become the hallmark of Pig Religion.

Pig Religion is, above all else, a fetish religion, above even the love of God; but most practitioners of Pig Religion are almost completely lacking in any understanding of fetishism as the single most damaging aspect of their own religion. In order to understand how such a strange and perverse practice evolved, we must journey back a long way to its roots.

“Hagee and all fetishists are hypocritically betraying themselves “into the clutches of bigotry, fanaticism, superstition, [and] intolerance” through their willing embrace of the doctrinal fetish of the Bible as the infallible word of God.”

Our primitive ancestors made anything extraordinary into a fetish. A man gets sick, something weird happens, he gets well— must’ve been that delicious cow pie he ate for dinner last night.
The same was true of the reputation of certain medicines, and the chance methods of treating disease. Hey— let’s see if leeches help. . . Objects appearing in dreams were likely to be converted into fetishes. Volcanoes and comets became fetishes, mountains or stars, not so much. Early man thought shooting stars and meteors indicated the arrival of special visiting spirits.

The persistence of nature worship led to belief in charms indwelt by some sort of nature spirit. When plants and fruits became fetishes, they became taboo as food. The apple was among the first to fall into this category; it was never eaten by the Levantines. And Eve? Well, she ate the forbidden apple and brought the shit down on all of us, now didn’t she.

Our ancestors felt no way superior to animals, but in many ways they envied them. And they were often named after their favorite critters. If a leopard did you a solid by eating your mother-in-law, it became a fetish. And when animals that ate us became fetishes, they also got taken off the menu; it was taboo to fondue the fetish ferret. People-eating was how man’s best friend the dog came to be the sacred animal of the Parsees. Apes and monkeys were early fetish animals too, thanks to their resemblance to us; snakes, birds, and pigs were right on their heels.

Over in Palestine the serpent was revered, especially by the Phoenicians, who, along with the Jews, considered it to be the mouthpiece of evil spirits. Talking snake in the apple tree? From Arabia on through India, to the snake dance of the Moqui (Hopi) tribe of south-eastern Utah, the serpent was king.

Certain days of the week became fetishes, too. Friday became an unlucky day, and the number thirteen became an evil numeral;  thus you get the double whammy of Friday the 13th. The lucky numbers, three and seven, came from later revelations;  lucky number four was derived from the four points of the compass.  But it was unlucky to count cattle or other possessions;  the ancients didn’t like to be counted either;  they were opposed to the taking of a census, i.e., “numbering the people.”

Saliva was long a potent fetish, and devils were thought to immediately pack their bags for the long trip back to hell if you dared hock a loogie on your evil neighbor.  For an elder to spit on you became the highest compliment. Human hair and nails became fetishes, the long-growing fingernails of the chiefs were the hott.  Skull fetishes accounted for a whole lot of head-hunting, and a dried umbilical cord was a highly prized fetish, and remains so today in some parts of Africa.

Hunchbacks, crippled children, and lunatics all became fetishes.  To be sure, primitives could not distinguish between genius and insanity, and we still share their difficulty, at least when it comes to selecting a president.  Idiots were either beaten to death or revered as fetish personalities.  Today, we not only allow them to live, we put them on the radio and dittoheads follow their words like the fools they are;  a modern day example of the blind following the blind.  Hysteria increasingly confirmed the popular belief in witchcraft;  epileptics often were priests and medicine men.  Poisons and intoxicants became fetishes;  drunkenness was looked upon as a form of spirit possession;  we still call hard liquor “spirits.”

Supposedly, ghosts liked to indwell some object which had belonged to them when they were alive;  this explains the efficacy of many modern relics.  The ancients always revered the bones of their leaders, and the skeletal remains of saints and heroes are still regarded with superstitious awe.  Many people still make “pilgrimages” to the tombs of great men.

Belief in relics is an outgrowth of the ancient fetish cult.  The relics of our religions represent an attempt to rationalize the fetish of the savage, and thus elevate it to a place of respectability in the religious systems of today.  But the hypocrisy still comes shining through, when it’s heathenish to believe in fetishes and magic, but just fine to accept relics and miracles.

The earliest artistic images were made to preserve the memory of the famous dead, idols becoming a later refinement of fetishism.  Primitives believed that a “ceremony of consecration” caused the spirit to enter the image; likewise, when certain objects were blessed, they became charms.

In an effort to fight such fetishism, Moses said, “You shall not make a graven image or any likeness of anything that is in heaven above, or on the earth beneath, or in the waters of the earth.” While his commandment retarded art among the Jews, it did lessen fetish worship. But Moses was smart enough not to suddenly displace the olden fetishes, so he allowed certain relics alongside the law in the the ark of the covenant. And we all know what happened when the Nazis tried to use it.

It was inevitable that words eventually became fetishes, more especially those which were regarded as God’s words.  In this way the sacred books of many religions have become fetishistic prisons, incarcerating the spiritual imagination.  To become fetishes, words had to be considered inspired— and the invocation of supposed divinely inspired writings led directly to the establishment of the authority of the church;  the evolution of civil forms led to the authority of the state.

In olden times the fetish word of authority was a fear-inspiring doctrine— the most terrible of all tyrants which enslave men.  The Urantia Book puts it this way:

A doctrinal fetish will lead mortal man to betray himself into the clutches of bigotry, fanaticism, superstition, intolerance, and the most atrocious of barbarous cruelties. Modern respect for wisdom and truth is but the recent escape from the fetish-making tendency up to the higher levels of thinking and reasoning.

So. Back to the Pig Religion of the modern day fetishists. I call it “Pig Religion” because it is these “swine”— a term Jesus used to describe those who would use/abuse his call to a higher spiritual idealism to wipe their own dumb asses— who now trample the “pearls” of Jesus, the very pearls they claim as the core values of their Christian faith.

Scientifically educated minds know the happenstance of a hurricane is not the supposed wrath of an all-loving, all-merciful God;  it’s a violent weather phenomenon— not a divine tool God uses to violate his own morals by murdering his children.  Intelligent religionists also understand that human relationships that fall outside the mainstream’s current mores aren’t evil by nature.  They further understand that their faith in God recognizes all mankind as the children of a divine Creator;  they comprehend the divine wisdom of “Judge not, lest you be judged,” and “Love one another.”

Hagee and all neocon fetishists are hypocritically betraying themselves “into the clutches of bigotry, fanaticism, superstition, and intolerance” through their willing embrace of the doctrinal fetish of the Bible as the infallible word of God.  In elevating the two-thousand year old prejudices of Pauline doctrine to the infallible word of God, they condemn themselves to living lives of blatant betrayal of the very values they claim to be most dear to their religious principles and practice.  In that sad process, they arrogantly and self-righteously attack and condemn those they see as different from themselves, in the very face of their own hypocrisy.

Monogamy always has been, now is, and forever will be the idealistic goal of human sex evolution.  But always have the unfortunate few had to suffer as the majority advances under the developing mores of our evolving civilization.  Even so, society must not overlook the unenviable situation of the men and women who fail to find a place in an evolving social order, especially when they have done their best to cooperate with, and enter into, its requirements. Monogamous marriage is ideal for those who are in, but it inevitably works great hardship on those who are left out.  But always should the favored majority look with kindness and consideration on their less fortunate fellows who pay the price of failure to attain membership in the ranks of those ideal sex partnerships, which can afford the satisfaction of all biologic urges under the sanction of the highest mores of advancing social evolution.

Christian Fetishist John Hagee has endorsed Republican presidential nominee John McCain, who has welcomed his endorsement.  If we apply the same rubric to McCain the, say, NCGOP is using on Obama, that makes McCain a homophobic bigot too, thanks to his association with Hagee by endorsement.

The longer fetishistic Pig Religion finds a home in the camps of any political candidates, the longer we can be assured of the high profile, cancerous bigotry of the likes of John Hagee, and the superstition, intolerance, and fanaticism that goes hand in hand with the increasingly antiquated and obtuse fetishism of the religious neo-conservatives of the Christian right.