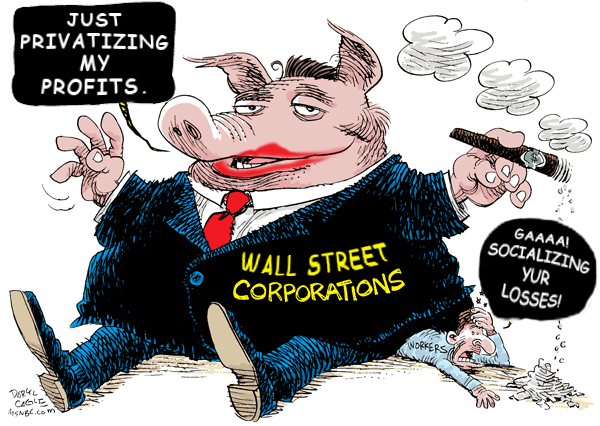 The way to feed rabbits is to feed hay to horses.

A lovely little adage better known as trickle down economics. Unfortunately, it also describes even the modified bailout plan promoted by congressional Democrats, a plan that has no guarantee of ever working nor limits on the eventual cost.

Instead of a top down approach,  a bottom up strategy that targets homeowners will more efficiently re-capitalize the economy. Of course, this would leave Secretary of the Treasury Henry Paulson‘s Wall Street gambler buddies eating  their phony paper derivatives instead of sticking the taxpayers with their losses.

As I understand it, derivatives such as collateralized debt obligations and credit default swaps are largely bets about what the underlying financial products are worth, at any given time. It’s one thing to bet on the outcome of say, the Super Bowl, and another to bet on the coin flip, the point spread, the score after each quarter, how many injuries will occur, how many turnovers and whether they are fumbles or interceptions, how many people will watch it on tv in the USA and throughout the world, ad infinitum.

Problem comes when the game is suddenly halted and after people have already started swapping and leveraging their intial positions for and against others. While unwinding all those derivative positions is certainly possible over time, we’re not talking about a single football game here but a financial market whose scale is literally unimaginable. Apparently Paulson’s come-to-Jesus moment occurred when he tried to sort through insurance giant AIG‘s positions and found himself transformed into Nietszche staring into the abyss, a gigantic black hole from which not even light can escape.

The whole logic of the bailout is screwy, similar to Herbert Hoover‘s attempt to bail out the banks during the Great Depression. (Which worked for about six months before caving in on itself.)  What is being sold as strictly a liquidity problem is belied by the hundreds of billions of dollars that the Fed has injected into the system. On one day alone last week, it turned on the spigot to the tune of $180 billion. The expectation was that interest rate on their 3-month Treasury bill, which reached a ridiculously low .02%, would send the money ‘trickling down’ from the major banks to those further down the food chain. Given that the 3-month Libor interbank rate was 3.2%, this created a huge profit incentive to get that money out on the street. Liquidity problem solved, right?

Bzzzzt! Wrong. The big banks said: Thank you very much, sir, can I have another? Instead, they hoarded the cash or it was used to pay money market redemptions to individual investors seeking stuffing for their new triple king size mattresses.

Rather the problem is one of solvency in which the asset side of the ledgers of various financial institutions is full of bogus paper derivatives of undetermined value.That means they have no credible collateral to pledge for new capital needed to grease the wheels that keeps the economy rolling; e.g. letters of credit to buy raw materials to fill orders that keeps people employed.

The basic Paulson plan is an attempt to create a market for these derivatives that would help determine their value. The problem is that in order to do re-capitalize the companies currently holding all those “toxic assets” the taxpayer will have to pay way more than they are worth in order to reflate the companies’ balance sheets so that they can, in turn, borrow more money to lend out.

Given the rising public outrage over even a modified bail out plan, sops like limiting corporate pay, otherwise known as locking the barn door after the thieves have stolen the horses; regulatory oversight (do-oh!); and providing taxpayers with equity positions in failed companies with the expectation that they might even make money someday– should be non-starters. But never underestimate the White House‘s proven ability to “panic” the public into accepting another screwing.

Take that ‘we can make money’ sop, for which the relatively successful Resolution Trust Corporation is held up as an example. The RTC was created to handle the last big financial mess, the ’80s Savings and Loan debacle that involved the collapse of 747 thrifts with total assets of $394 billion.

(Starring roles included one Senator John McCain, champion deregulation protagonist for his biggest campaign donor, Charles Keating; and one of the infamous Bush Brothers, Neil, the director Silverado Savings and Loan that alone ended up costing the US taxpayer $1.3 billion).

But the comparison with the RTC is inapposite. It had a much easier job since it didn’t take an equity position in troubled companies; they had already closed their doors. Rather their job was the orderly liquidation of the failed thrifts’ assets consisting mostly of foreclosed homes, phased sales that didn’t depress the market. Even so, the overall cost to the taxpayer was $123.8 billion.

To re-establish “trust” in a rotten financial system, the American taxpayer is being called upon to make greedy speculators whole. The irony is that they will be underwriting the greatest sub-prime “loan” ever conceived by mortal mind. Snake eats tail, and another moral hazard is born for future generations to digest.

Mussolini is said to have defined fascism as the marriage between corporations and government. Who knew that in the case of the USA it would be a shotgun wedding?

The seeds of US fascism have been evident for some time now in the revolving door relationship between retired legislators who become lobbyists for the industries they supposedly regulated. Former Louisiana congressman and master deregulator Billy Tauzin is exemplary, hired the very same day he quit the House by Big Pharma for a reported $2.5 million per year.

In the case of Wall Street, that flow has been reversed. Two of the last three Treasury Secretaries, Robert Rubin and Henry Paulson, formerly held positions as CEO of Goldman Sachs (who might just be called upon to help “manage” some of those hundreds of billions of bailout dollars, now that it is has been magically transformed into a properly regulated commercial bank and all).

Of course we shouldn’t forget retired military officers whose second careers include lobbying for the defense industry and consultant work for television propaganda “news” departments, trotted out whenever there’s a war to sell.

The Bush Administration has done its best to realize Mussolini’s Dream, allowing industry to draft bills that compliant legislators then sign their names to. Nothing need be said at this time about the contiguous effort to create a no holds barred surveillance state.

Not saying that all this was planned as some sort of master conspiracy to take over the US government. But until we can reverse the top down dynamic of what passes for leadership in this country with a bottoms up grass roots approach to problem solving, this kind of shit just seems to happen by default.

In the case of the “bailout” I say use the money to buy down people’s mortgages directly; and, if the current note iolders can even be identified, re-write the terms. (Why wait for a bankruptcy judge to get involved?) That would put a floor under housing inventory, now some 4 million strong, stopping the downward spiral of prices.

Use additional money to re-capitalize Fanny and Freddie to make loans available to new home buyers to sop up that inventory; as well as provide re-fi money to help existing homeowners pay down exorbitantly high credit card debt. Even done as a strictly lateral move, the savings in interest costs alone would put more coin in consumers pockets.

Total indebtedness should be considered in designing any kind of bailout plan because the stark reality is this– the country is broke. We need to re-start the equity building process to lay the predicate for future wealth. In past financial crises, we at least had a robust manufacturing capability that we could rely on to build our way out. No more. Decades of making the world flat for Tom Friedman and his free trade globalist sponsors has seen to that. Nobody wants our phony paper exports anymore.

So its back to job generating WPA style projects, necessary in any case due to the woeful state of our brick and mortar infrastructure. And starting new industries like alternative energy development that has the added benefit of reducing global warming.

My fellow rabbits, what to do about those hay eating horses? Putting them out to pasture is to good for them. I say– put them out of their misery. Lots of undernourished dogs out there.

Now its back to my re-write of George Orwell‘s Animal Farm.