In the classic intro to the original Rod Serling series,  the shattering window pane is the Overton Window of radical right wing craziness, pushed off the edge of the political continuum by the Teabaggers and their Birchian ancestors . The ticking stopwatch is the countdown to the Republican National Convention in Tampa, FL. August 27, 2012, a mere ten months away.

Consider the following episodes, available for direct streaming into your consciousness from the wingnut dimension of The Zone , with your favorite GOPer candidates in the starring roles.

“Little Girl Lost” (1962) A little girl crawls through an interdimensional doorway that has appeared in her room.

Missing: one frightened little girl. Name: Bettina Miller. Description: six years of age, average height and build, light brown hair, quite pretty. Last seen being tucked into bed by her mother a few hours ago. Last heard–aye, there’s the rub, as Hamlet put it. For Bettina Miller can be heard quite clearly, despite the rather curious fact that she can’t be seen at all. Present location? Let’s say for the moment–in the Twilight Zone.

The good news is that at the end of the episode, Bettina (played by a young Michelle Bachmann in her debut role as a media celebrity) is rescued with the help of a physicist friend who knows how to connect the dots between dimensional wormholes. A half century later, we find out that the Bachmann character really returned missing the rational part of her brain. 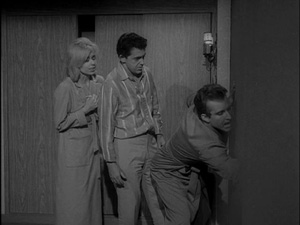 “Walking Distance” (1959) While visiting his boyhood hometown, a middle-aged executive (Gig Young) finds himself in the past.

Putatively, the favorite episode of producer J.J Abrams (Lost, Star Trek).  Rick Perry dreams of returning to the glory days of antebellum Texas when people were free to write “Niggerhead” anywhere they wanted.

“The Four of Us Are Dying” (1960) A con man changes his face to make it look like anyone he chooses.

Not much to add there. A man for all seasons and constituencies, Flipper’s shape-shifting abilities on the issues are legendary.

…in a small town, and the townsfolk know him well for the tall tales he spins of his experiences, from his heroism in war to his inventions to his advice to presidents and captains of industry, all of which he fabricates. His friends gather in the store to hear him spin his stories, which they find very entertaining, and he often accompanies himself on his harmonica.

One evening, as he is alone at closing time, creatures from another planet, disguised as humans, abduct him to their spaceship. They want Frisby to add to their collection of specimens from other planets. The aliens accept his exaggerated tales at face value… Frisby admits to them that he is simply a shameless liar, but the aliens have no concept of lying, and ask him to just sit quietly and wait for departure…. After two or three aliens are rendered senseless by [his] harmonica, the remaining ones permit Frisby to escape. Running back to the general store, he finds all his friends waiting to throw him a surprise birthday party. When he tries to tell them what happened, they enjoy a laugh at what they of course take to be another of Frisby’s tall tales. 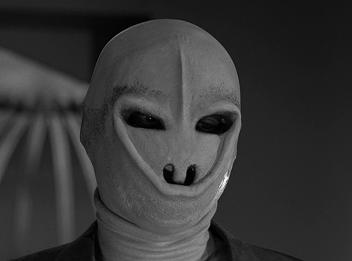 Some people, not to mention aliens, will believe anything you tell them

Rick Santorum, truly a frothy man out of time. If he could only substitute the Old Testament’s Leviticus for today’s penal codes, we wouldn’t have to worry about the whole gay thing.

Ed Lindsay…is dismayed over the mindless and worthless programs and commercials emanating from the television set…He retrieves from the basement the old radio which, in his younger and happier days, he enjoyed as a source of relaxation and entertainment. Installing it in his joyless room, he is astonished to hear the radio transmit 1930s/40s music and programs…He tries to tell the others about the miraculous broadcasts, but they only hear static. What’s more, when he tries to contact the radio station…he discovers the station went off the air (and out of business) 13 years before…

“On Thursday We Leave for Home”   (1963)  The leader of a group of spaceship crash survivors tries to maintain his control over his people when they are finally rescued after many years.

One has to wonder what the man who many consider to be the founding father of the original pre-Koch Brothers Tea Party must feel knowing that the movement he birthed is unceremoniously making him one of the Left Behind.

Thirty years before…an expedition to the hellish Desert planet V9-Gamma was stranded, and the people had no choice but to begin their own small settlement there…When a rescue mission from Earth finally arrives, Benteen is at first as jubilant as the others, but then he begins to raise objections to leaving the asteroid behind and tries to persuade the others to stay... As the ship prepares for takeoff, Benteen pretends his people are still there. Then, remembering the beauty of Earth, he realizes that he wants to go home. He rushes out screaming for the ship to come back, but it is too late. He is now stranded on V9-Gamma for the rest of his life, completely alone in the barren, lifeless deserts.

“The Last Night of a Jockey” (1963)  A jockey banned from horse racing for fixing races gets his wish of becoming a “big man” by a man claiming to be his ego.

All he ever wanted was to be respected. He argues with his alter-ego, trying to justify his life and his actions, but the alter-ego knows better. Grady is offered the chance to change his life with one final wish. Grady says his greatest wish is to be big. After Grady wakes from his nap he finds his wish has been granted…He’s “big”.

…A telephone call from the racing commission informs Grady that he has been given another chance – he has been reinstated and can jockey again. We hear the alter-ego laughing mockingly. Why? Because now it’s too late: unbeknownst to Grady, he has grown even larger — he is now not only too tall to ride a horse, but barely fits in his own apartment! Grady screams “I’m too big! I can’t ride!” Devastated, the now-giant Grady wrecks his room and pleads with the alter-ego, “Please! Please! Please make me small, please! I’ll never ask for anything again. Please make me small!”

The alter-ego replies, “You are small, Mr. Grady. You see, every time you won an honest race, that’s when you were a giant. But right now, they just don’t come any smaller.”

When you have the likes of Pat Robertson, the embodiment of Uber Political-Religious Fundamentalism; Karl Rove , the evil genius behind two Bush presidencies; Mississippi’s redneck governor and former GOP Chairman Haley Barbour and former FL governor Jeb Bush warning the current crop of GOP presidential pretenders that they are tacking way too far to the right, you know you have crossed over into The Republican Twilight Zone.

It’s like being called “ugly” by the alien in the movie Predator. 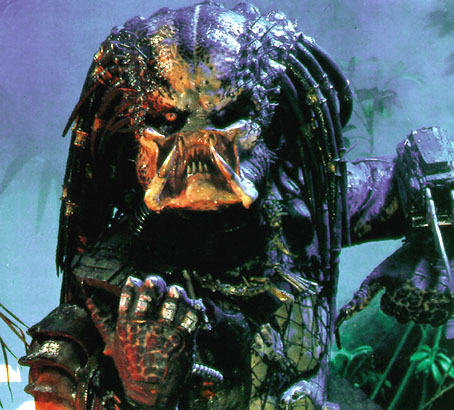 Finally, Jon Stewart interprets the reaction of the GOP establishment to its own presidential candidates:

“If you tell people what we honestly believe, an electoral majority of those people will freak the fuck out!”

The Daily Show with Jon Stewart