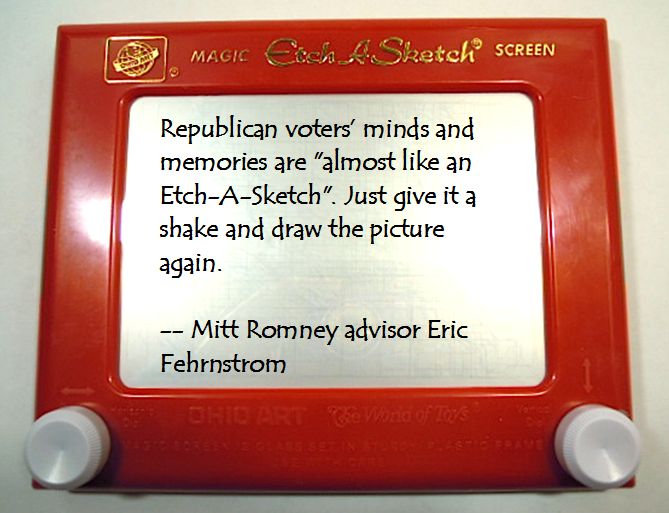 Talk about stepping on your own message. A decisive win in the Illinois primary, the much coveted endorsement by former Florida governor Jeb Bush that was supposed to signal the end game of the GOP primary in which Republicans would finally rally around a single opponent for the hated Barack Obama, all were subsumed by a truthful but impolitic remark by Willard Mitt Romney‘s senior aide and communications director, Eric Fehrnstrom:

CNN HOST: Is there a concern that Santorum and Gingrich might force the governor to tack so far to the right it would hurt him with moderate voters in the general election.

FEHRNSTROM: Well, I think you hit a reset button for the fall campaign. Everything changes. It’s almost like an Etch A Sketch. You can kind of shake it up and restart all of over again.

I’d love to see a commercial featuring Etch a Sketch Romney with the classic Aaron Tippit song “You’ve Got To Stand For Something” playing in the background:

“You’ve got to stand for something, or you’ll fall for anything.”

Fits the man and his campaign to a “T.”