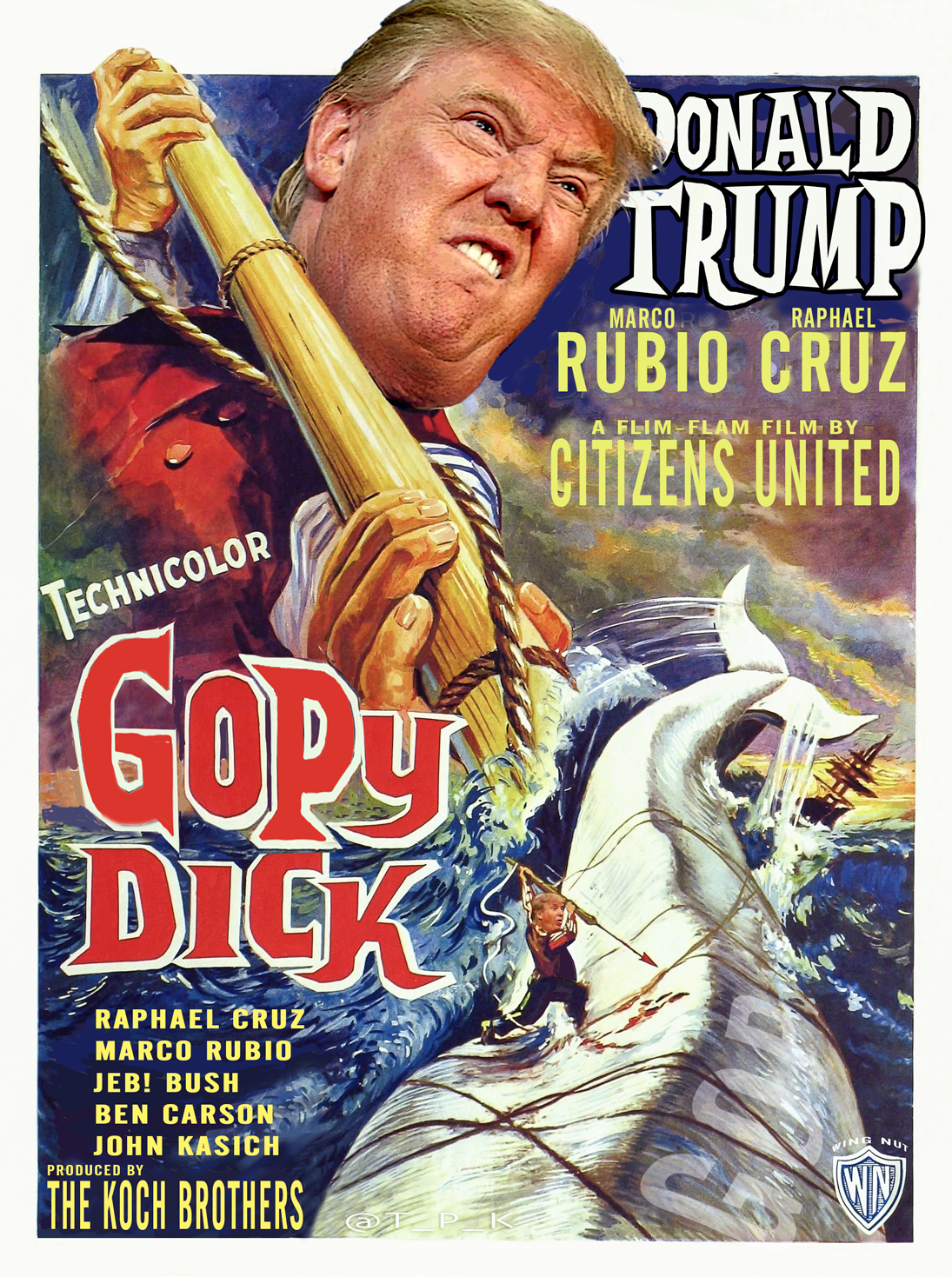 From hell’s heart I stab at thee; for hate’s sake I spit my last breath at thee. Ye damned whale.

Some six weeks ago, we wrote:

However, the policy implications of this kind of craziness on the GOP platform is a clown car of a different color. With the advent of Superpacs, a consequence of the Supreme Court’s infamous ruling in Citizens United, marginal candidates who would have previously dropped out of the running for lack of funds, can now soldier-on right into the Republican nomination convention. Instead of their delegates being liberated, i.e., up for grabs, will they now remain under his or hers control, and by extension, the control of the candidate’s  anonymous Big Money contributors? That’s a crucial question confronting Reince Preibus and the GOP establishment in the weeks and months to come. A brokered convention with a muscular Superpac component is shaping up to be the political equivalent of a Mad Max Beyond Thunderdome sequel.

Rubio, who openly contemplated the possibility of a contested convention in an AP interview last week, is not the only candidate whose campaign is preparing to contest the shadow primary.

One Southern state party chairman said that the calls from campaigns seeking data — such as contact information on eligible delegates and the names of people who have served as delegates in past years — began in late 2015. The chairman said calls have also come from third-party vendors who declined to identify which campaigns are their clients. “There’s a bit of skulduggery. … I suspect some super PACs are behind some of this.”

Toby Neugebauer, a Cruz super PAC megadonor who has long maintained that this nominating contest would be drawn out, said he has invested in custom delegate-tracking software but did not provide further details of his efforts on that front.

The Southern state party chairman who called an open convention “the white whale of politics” said the possibility is driving side conversations at party meetings. “We all sit around and talk about it at [Republican National Committee] meetings.”

The “white whale of politics…” Almost seven years ago to the day, we published Rethuglican Hallucinations, which used the Moby Dick, white male metaphor to underscore the GOP’s delusional obsession that tax cuts for the uber-rich would somehow trickle-down for the benefit of the rest of us. Eight years of Republican rule under the George W. Bush Administration produced two massive, unfunded tax cuts(not to mention two unfunded wars and the expansion of Part D Medicare)  that drove the US economy to the very precipice of another Great Depression.

Not much has changed since then. Except that the rich have gotten richer, the poor have gotten poorer, the middle class has shrunk, and banks that were considered too big to fail at the time of crash (with $8 trillion in assets in 2008) have only gotten bigger ($10 trillion today). Wealth inequality, the cornerstone of the Bernie Sanders campaign, grew dramatically as a consequence of taxpayer bailouts begun under the Bushies and magnified by the Federal Reserve’s “quantitative easing” and zero interest rate policies.

Congress did manage a watered down effort at bank regulation, the Dodd-Frank Act, passed under President Obama, but every GOP presidential candidate wants to scrap it (along with Obamacare and the rest of his presidency) the minute they takeover the White House.

However, thanks to the Great White Leviathan with the orange fringe on top, currently poised to win the GOP nomination, not only would they lose an opportunity to take over the White House, but might result in their loss of the Senate, and the Supreme Court for a generation. Their only hope is a brokered convention. And that would likely result in destruction of the party if they try to screw the Tea Party and nominate another establishment Republican.

And now it’s back to the future, with this blast from the past.

In trying to account for the experience of color, neurobiologist Humberto Maturana decided to treat the nervous system as a closed system, depriving it of external sensory inputs. Incidentally, he found that deprived of such inputs, the nervous system can’t distinguish between ordinary perception and hallucinations.

Similarly, the Rethugs, by becoming a closed ideological system, have no way of distinguishing between their own hallucinations and the reality the rest of America inhabits. They have transformed themselves into Capt. Ahab lashed to the Great White Whale of tax cuts, plunged time and time again beneath the roiling waters of reality.

Eight years of tax cuts under their leadership produced a measly 3 million jobs, compared to the 22 million created under the last Democratic administration. In the present economic crisis, one doesn’t have to be an economist to conclude that direct government created jobs programs are going to produce way more jobs than will tax cuts for corporations and the wealthy, who have no incentive to do anything but hoard the money in these uncertain times.

In the climax of the movie version starring Gregory Peck, Moby Dick surfaces one last time. One of the arms of the now drowned Ahab has come loose, flopping back and forth. The Rethugs mistake that pitiful movement for life and direction.

Just before Moby plunges them one last time into the depths.

Success may generate courage and promote confidence, but wisdom comes only from the experiences of adjustment to the results of one’s failures. Men who prefer optimistic illusions to reality can never become wise. Only those who face facts and adjust them to ideals can achieve wisdom. Wisdom embraces both the fact and the ideal and therefore saves its devotees from both of those barren extremes of philosophy — the man whose idealism excludes facts and the materialist who is devoid of spiritual outlook. Those timid souls who can only keep up the struggle of life by the aid of continuous false illusions of success are doomed to suffer failure and experience defeat as they ultimately awaken from the dream world of their own imaginations. • —The Urantia Book