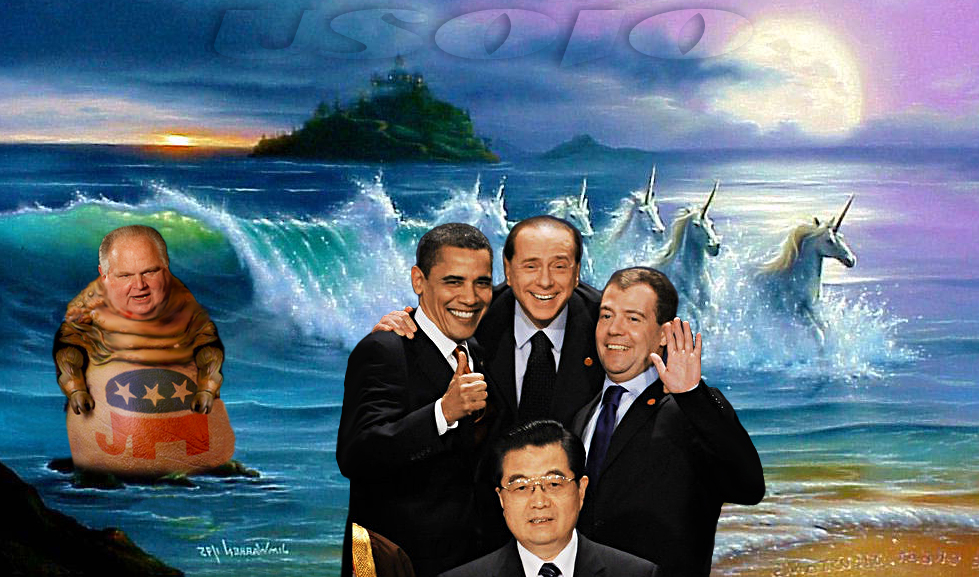 A disgruntled and frustrated Rush Limpbot washed up in the surf to give evil-eyes to President Obama as he photo-opped with Italy’s Prime Minister Silvio Berlusconi,  Russia’s President Dmitry Medvedev,  and President Hu Jintao of China, as they find ways to success at the G20 summit in London, Thursday, while Obamacorns magically erupt out of the sea.

LONDON — With the one day super conference coming to an end with what critics are dubbing “Obamacorns” magically appearing out of the sea, U.S. President Obama said, “I think we did okay. We have agreed on a series of unprecedented steps to restore growth and prevent a crisis like this happening again.  We have created as fundamental a reworking of resources to these international financial institutions as anything we’ve done in the last several decades.”

“Holy Shit,” whistled Italy’s Prime Minister Silvio Berlusconi, “The guy just kicks it into another gear.” German Chancellor Angela Merkel agreed.  “We have a very, very good, almost historic compromise” that will provide the world with “a clear financial markets architecture.  And President Obama is such a gentleman,” she crooned, “he keeps his hands to himself.”

The group announced a global supervisory body to sniff out problems before they turn into full-fledged shit-storms, and pledged 1.1 trillion pieces of agreed upon valuable paper, what twentieth century historians called munnies, to aid countries they previously shat upon with nonchalant regularity.

Oh.  The “Obamacorns“—  the sparkly-white pony-things with single horns that filled the atmosphere at the summit with great expectations— were last seen running into the London row houses followed by a phalanx of press trucks.  And Rush Limpbot?
Who gives a rat’s ass.