Roman bridge leading to the Mezquita, or Mosque-Church, in Cordoba, Spain

I got me a bone to pick with Sharif el-Gamal, the developer of the Muslim community center in Lower Manhattan, originally called Cordoba House, on near the site of the former World Trade Center.

While there are a variety of groups for and against its construction, the most frenzied opposition comes from Islamophobes (sounds like “Obamaphobes”). Islamophobes number among their numbers old fashioned religious bigots, unrepentant neocons still trying to gin up a War of Civilizations with the Muslim world, and Rupert Murdoch’s News Corp, a media conglomerate that banks billions by fostering conflict at every level of society.

One of the shouting points Islamophobes use against the center’s construction is that by changing the name to Park51, the developer is tacitly admitting that the original reference to Cordoba was code for a terrorist “victory shrine.” Additionally, in order to associate the center with some of the worst practices of groups like the Taliban, it is also portrayed as the first step towards the imposition of Sharia law on US citizens.

Yeah, I know—pretty whacked. But effective propaganda must contain at least some factual basis around which to weave a narrative. Thus, a brief history of the Spanish city of Cordoba is in order.

Cordoba, located in southern Spain, is believed to have been first occupied by the Carthaginians. It was occupied by the Romans in the second century B.C., conquered by the Visigoths in the sixth century A.D., by the Moors in 711, and by the Spaniards in 1236. The Romans built a temple to Juno, the Visigoths a basilica. the Moors a mosque, and the Spaniards a cathedral—all on the same site. If you see a pattern here, go to the head of the class.

There is hardly an ancient Druid religious site in Europe that the Catholic Church didn’t build a church over. Muslims built the Dome of the Rock on the site of the second Jerusalem Temple (six centuries after it was destroyed by the Romans). In 1401, Christians destroyed the 12th-century mosque in Seville, erecting a large cathedral in its place.

So much for the factual nugget of the Islamaphobes’ victory mosque narrative. For their historical analogy to even make sense, the Twin Towers would have to be religious buildings, unless of course you consider them cathedrals to capitalism, full of money changers and such. And the center would have to be built on the former WTC site. As Keith Obermann points out, it will be blocks away and the proposed buildings for the two sites won’t even be visible from each other.

Architectually, the center looks more like a modern office building– no minarets, prayer tower, domes, etc. Functionally, it is the Muslim equivalent of a YMCA, complete with a swimming pool, basketball court, community center, meeting rooms, kitchens for cooking classes, etc. (Can’t wait for some wingnut to suggest that the swimming pool is really designed to train terrorist underwater demolition teams at night when no one is around.) And yes, it will have a prayer room to accommodate the Islamic call to prayer five times a day. If that makes it a mosque, so be it. 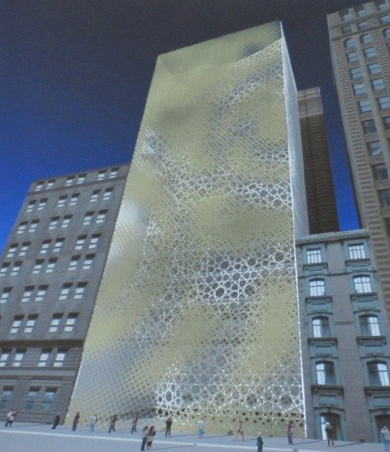 But as I said, my real gripe is with the developer, who admitted to The Financial Times that he changed the name from Cordoba House because of “the backlash” fueled by the Islamophobes’ twisted narrative. My sincere hope is that he change it back, emphasizing the positive role Cordoba played in European history promoting multi-cultural learning and religious tolerance, the very role he envisions for the new center.

One hundred years before the birth of Christ, Cordoba was the site of a Roman forum, a nexus of knowledge, law, and commerce. In spite of its violent history (Julius Caesar had 20,000 on its inhabitants slaughtered for supporting the sons of Pompey in the Battle of Munda in 45 B.C.), Cordoba continued as a center of learning, becoming one of the most populous and prosperous city in all of Europe. According to Wikipedia:

During the caliphate apogee (1000 AD), Córdoba had a population of roughly 400,000 inhabitants, though estimates range between 250,000 and 500,000. In the 10th-11th centuries Córdoba was one of the most advanced cities in the world, as well as a great cultural, political, financial and economic centre. The Great Mosque of Córdoba dates back to this time; under caliph Al-Hakam II Córdoba received what was then the largest library in the world, housing from 400,000 to 1,000,000 volumes.”

My 1970 version of Britannica states that Al-Hakam II also “founded 27 free schools in Cordoba and attracted scholars from the east to teach at the university.” Cordoba gave birth to many famed scholars, poets, and musicians. Seneca the Elder and his son Lucius (Seneca the Younger) were born there, as was the poet Lucan and the Jewish scholar/philosopher Maimonides. Seneca the Elder wrote a:

“…ten-book compilation, the Controversiae, in which imaginary legal cases comprised of seventy-four themes were debated…”the opinions of the rhetoricians upon each case being given from different points of view, then their division of the case into different single questions (divisio), and, finally, the devices for making black appear white and extenuating injustice (colores).”

Compare that level of dialogue to today where most Americans get their ideas and information from cable tv’s punditocrats and radio talk show hosts speaking in truncated, often vitriolic and vacuous pre-spun sound bites, “making black appear white and extenuating injustice.”

In her book about Cordoba, The Ornament of the World: How Muslims, Jews, and Christians Created a Culture of Tolerance in Medieval Spain, Yale professor Maria Rosa Menocal attempts to convey the ecumenical spirit of inquiry that prevailed in Cordoba during the Middle Ages. One reviewer writes:

María Rosa Menocal’s wafting, ineffably sad The Ornament of the World tells of a time and place–from 786 to 1492, in Andalucía, Spain–that is largely and unjustly overshadowed in most historical chronicles. It was a time when three cultures–Judaic, Islamic, and Christian–forged a relatively stable (though occasionally contentious) coexistence. Such was this period that there remains in Toledo a church with an “homage to Arabic writing on its walls [and] a sumptuous 14th-century synagogue built to look like Granada’s Alhambra.” Long gone, however, is the Córdoba library–a thousand times larger than any other in Christian Europe. Menocal’s history is one of palatine cities, of philosophers, of poets whose work inspired Chaucer and Boccaccio, of weeping fountains, breezy courtyards, and a long-running tolerance “profoundly rooted in the cultivation of the complexities, charms and challenges of contradictions,” which ended with the repression of Judaism and Islam the same year Columbus sailed to the New World. -H. O’Billovich. 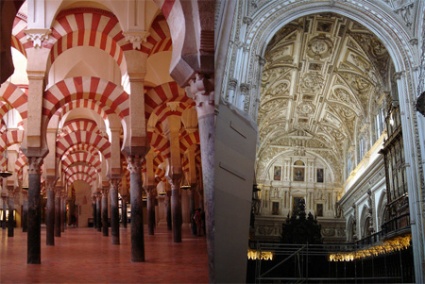 When you come to a fork in the interior in the Mosque-Cathedral, take it

Menocal argues that while there were periods of fundamentalism and persecution, the over-all achievement of Spain (both Christian states like Valencia and Muslim ones like the Umayyad Caliphate centered at Cordoba) was of a broad tolerance and a shared love of learning (the library at Cordoba had 600,000 volumes at a time when there were probably only a few thousand manuscripts in all of France). In many ways, the multicultural religious atmosphere of medieval Spain, before the Almohads from one direction and the Inquisition from another did it in, most resembles that in the United States today.

Menocal is brilliant throughout, but especially good at recognizing the secular aspects of Arab culture that often formed an attraction even for those in Andalusia who did not convert to Islam…”

Surely a community center like Cordoba House, dedicated to interfaith outreach and multi-cultural understanding, is sorely needed in these divisive and polarizing times. Opponents like to point out that they don’t object to mosques in general, just not one so close to Ground Zero. It’s like, you know, so insensitive. But when asked exactly where the zone of insensitivity dissipates– how far away is far enough– average opponents gets flummoxed, even angry. They just don’t have a good answer to that question since it conflicts with basic constitutional principles to which they say they ascribe.

Such cognitive dissonance doesn’t bother the Islamophobes at all.  Led by Newt Gingrich, they argue that Muslims can build their mosques in America when churches and synagogues are allowed in Saudi Arabia. Hate to point out the obvious, but equating a theocractic monarchy with a constitutional republic and expecting the latter to adopt the standards of the former is just plain idiotic. I assume that Professor Gingrich is familiar with the logical fallacy of conflation. In his formulation, two very secular buildings attain the status of religious buildings because—wait for it– they occupied “sacred” or “hallowed” ground. I guess he figures that because Bush got away with conflating Saddam with Al Qaeda to gin a war in Iraq he can use the same ploy to pander to those trying to gin up a war against Islam.

What I think he and the Islamophobes really object to is having, within walking distance, a center whose very function undermines their over-arching narrative that Muslims are the bad guys, Teh Other. Can’t have people from all over the world visiting the 9/11 memorial and then taking a stroll down the street where they can get, as Paul Harvey used to say: