“When the [Nagasaki] bomb went off, a flier on another mission 250 miles away saw a huge ball of fiery yellow erupt.
Others, nearer at hand, saw a big mushroom of dust and smoke billow darkly up to 20,000 feet,
and then the same detached floating head as at Hiroshima.  Twelve hours later Nagasaki was a mass of flame,
palled by acrid smoke, its pyre still visible to pilots 200 miles away.  The bombers reported that black smoke had
shot up like a tremendous, ugly waterspout. With grim satisfaction, [physicists] declared
that the ‘improved’ second atomic bomb had already made the first one obsolete.”

Joe Kieyoomia was a young Navajo soldier from New Mexico.  In April of 1942, he was captured by the Japanese when the Allied forces surrendered the Philippines.   Thus began several months of beatings at the hands of his captors, who had mistakenly, or intentionally assumed he was a Japanese-American, and therefore a “traitor” as well as an enemy.  He was also one of 75,000 prisoners that would endure the beheadings, bayonet stabbings, rapes, disembowelments, rifle-butt-beatings, throat-cuttings, casual shootings, and lack of food or water on the sixty mile march through the jungles of Bataan— the Bataan Death March.

Since his captors believed he was a Navajo Indian, when he arrived at camp O’Donnell, Joe was questioned, then tortured for information about the “Navajo Code,” that had baffled the Japanese.  Although he could understand bits and pieces of the sophisticated code the Navajo Code Talkers were using, he told the Japanese the truth— the coded messages sounded like nonsense to him.

Joe was put on a prisoner transport ship headed for Japan.  These prisoner transports were unmarked, and thus were frequently targeted by Allied submarines and aircraft.  They were also called “hell-ships,” because prisoners were forced into cargo holds like cordwood— with very little ventilation, no food or water, no sanitation— for a journey that would last seven weeks, if you survived it.  Many of the men died en route from asphyxia, starvation, and dysentery.  Some men lost their minds;  others just became delirious and unresponsive to their environment.

Joe Kieyoomia survived the hell-ship trip, and was eventually imprisoned in a P.O.W. camp in the Japanese coastal city of Nagasaki.  There, his interrogations were conducted with a renewed intensity.  He was stripped naked and made to stand for hours in deep snow until he talked.

Joe did not talk.

He was ordered to return to his cell;  but when he didn’t immediately move, he was shoved by a guard; which caused the skin of the soles of his feet to tear.  Joe’s feet had been frozen to the ground.

At 11:01 A.M. On the morning of August 9th, 1945, the nuclear projectile named “Fat Man,” containing a mere 14.1 pounds of plutonium-239, was dropped from high above Nagasaki valley. Forty-three seconds later it exploded, at 1,540 feet above the ground;  almost exactly halfway between the Mitsubishi Steel and Arms Works to the south, and the Mitsubishi-Urakami Ordnance Works to the north.  Best estimates of immediate deaths range from 40,000 to 75,000 people.  But Joe Kieyoomia was not numbered among those casualties. He survived that day, because he was inadvertently protected by the thick walls of his prison cell.

The men in the squadron that delivered the two nuclear projectiles that exploded over the cities of Nagasaki and Hiroshima, did not refer to them as “atomic bombs” or “atom bombs.”  They called them “The Gimmick.”  The name had developed along with the bombs themselves, reflective of the overall mission of the devices:  to bring about the swiftest possible conclusion to a world-wide war.  “The Gimmick” did just that.  Within a week, the Japanese surrendered, in the hope they would be saving what remained of their nation and their people, from obliteration.

Reflect on the fact that over 25,000 nuclear weapons, many times more powerful than the two gimmicks of mass destruction dropped on Japan, still exist around the world.  At this very moment, more than 2,200 are on alert, ready for use in a few minutes or hours.  The United States and Russia maintain more than ninety-six percent of the world’s total.

During the first third of the twentieth century
Urantians killed more human beings than were killed during
the whole of the Christian dispensation up to that time.
. . .And this is only the beginning of the dire harvest of materialism
and secularism;  still more terrible destruction is yet to come. 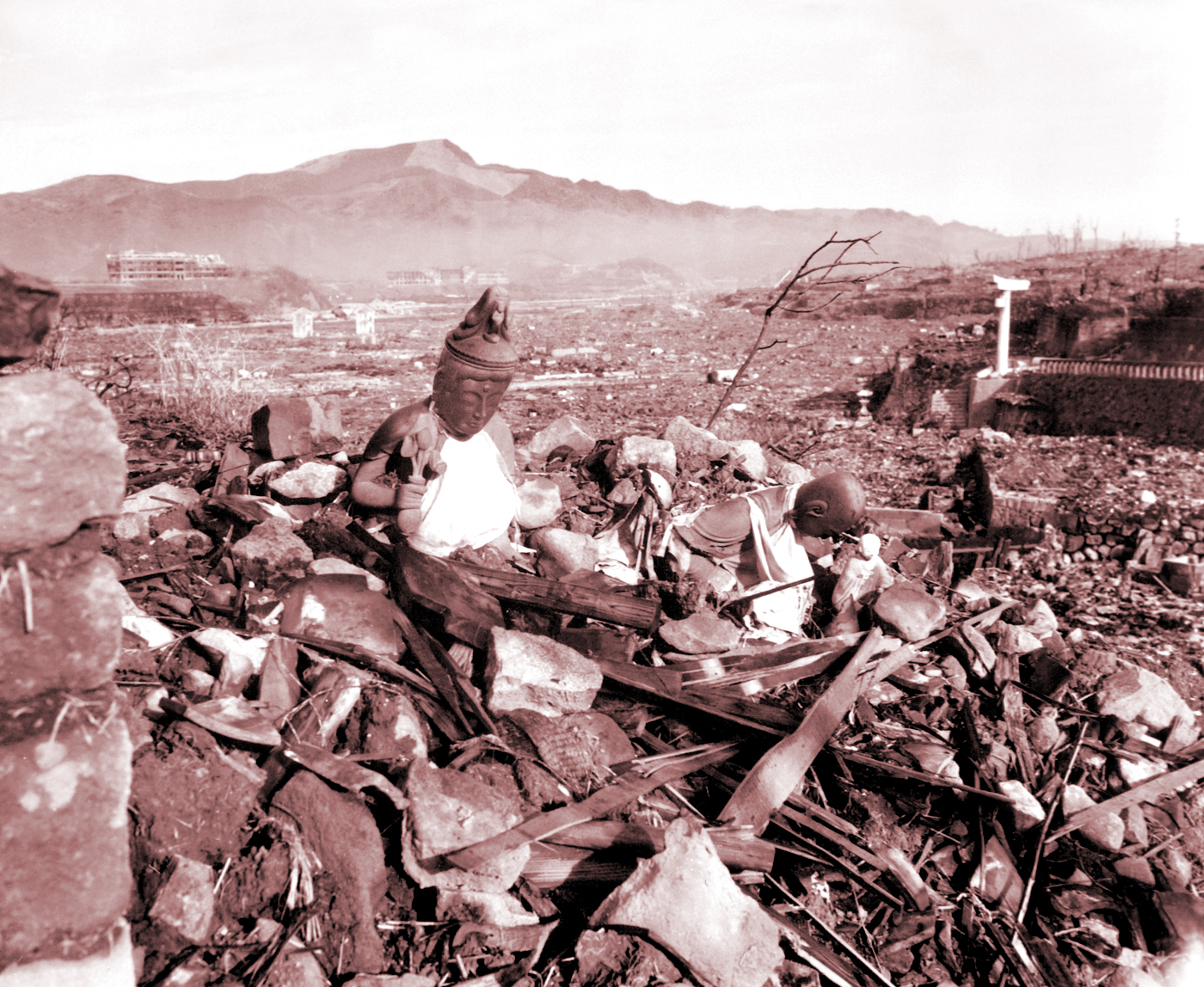 During the first third of the twentieth century
Urantians killed more human beings than were killed during
the whole of the Christian dispensation up to that time.
…And this is only the beginning of the dire harvest of materialism
and secularism;  still more terrible destruction is yet to come.