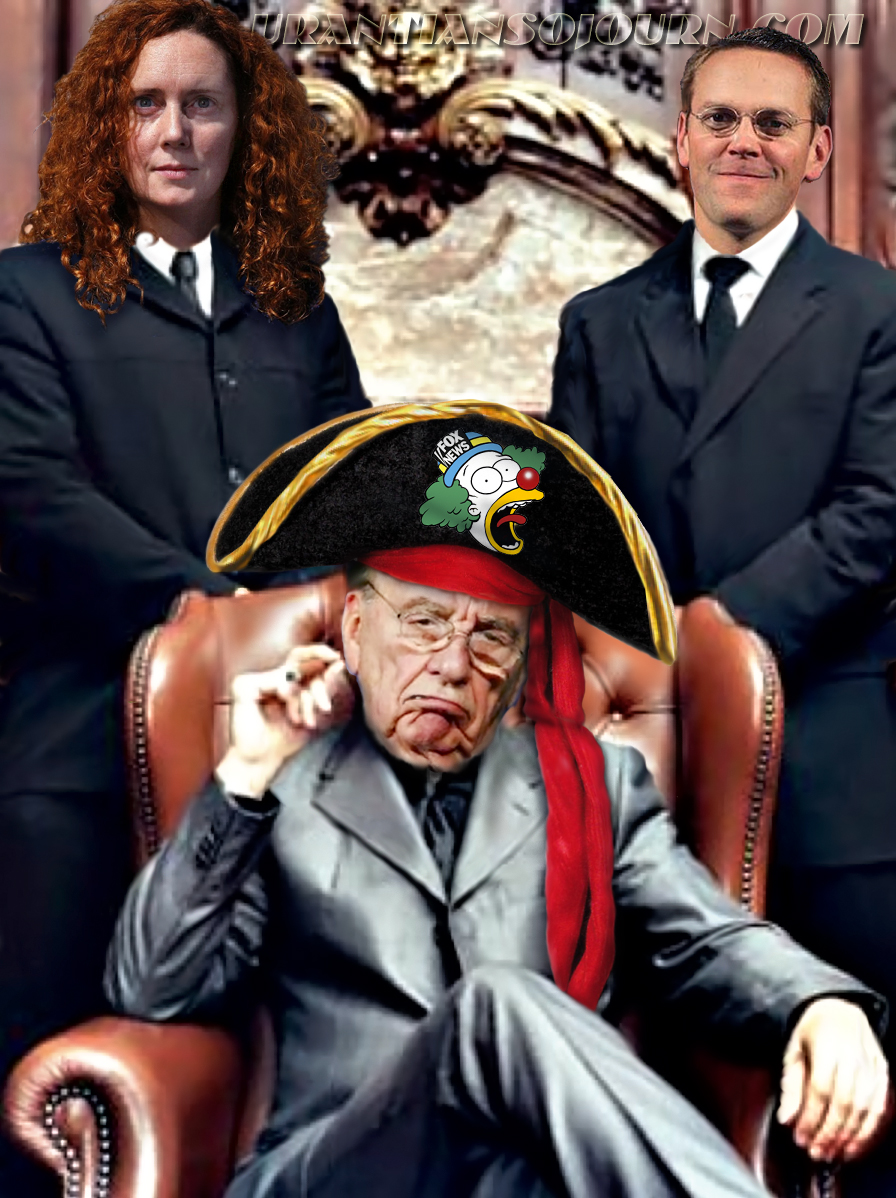 Admiral Rupert and his would be successors, son James and head wench, Rebekah Brooks

The ongoing ship wreck of Rupert Murdoch‘s media empire, News Corporation, dipped its bow farther into the icy waters of the Atlantic yesterday.

A year after the company announced its $12 billion offer to buy the 61% of England’s largest satellite tv company, British Sky Broadcasting that it didn’t already own, it bowed to the inevitable and withdrew its bid, which needed government approval to proceed. Had the buyout of BSkyB succeeded, it would have been the crown jewel in the Murdoch family holdings.

Two days prior to the BSB withdrawal announcement, Murdoch of Mordor shuttered the doors of one of his most lucrative newspaper holdings, the 168 year old News of the World. Turns out its reporters, and now apparently reporters from his other three newspapers, The Sun, The Times, and The Sunday Times, had illegally hacked the phone records of a whole host of British citizens, including actors, politicians, the Royal Family, police investigators, victims of the 7/7 subway bombings, the families of veterans killed in action in Afghanistan and Iraq, and perhaps most egregious of all, 11 year old murder victim, Milly Dowler.

Historians might well consider the Dowler case the straw that broke the camel’s back. Milly was murdered by a serial killer, a tragedy that naturally captured the imagination of millions. In a deplorable attempt to advance the story’s emotional arc, Murdoch’s minions hacked her voice mail records, hoping to find some additional, melodramatic details to keep the story boiling on the front burner, producing false hopes from her parents and police investigators that Milly was still alive, somewhere, auditing her messages from afar.

Reporters from The Sun are also suspected of hacking the tax, phone, legal records of former Prime Minister Gordon Brown. Brown was alerted by his bank, Abbey National, that someone was “blagging”, his account records, aka identity theft. Bad enough. But then it got personal:

But the most damaging aspect of the affair involved Mr. Brown’s [5 year old] son. The person close to Mr. Brown said he believed that The Sun gained access to his son’s medical records for an article about his cystic fibrosis that ran in November 2006, four months after the boy’s birth. The BBC, quoting its sources, said the information about the boy’s condition had been obtained first by The Sunday Times, and passed to The Sun. It said that Rebekah Brooks, then The Sun’s editor and now News International’s chief executive, called Mr. Brown and his wife, Sarah, to tell them that the paper knew of the boy’s condition, which they had believed was something known only to themselves and medical professionals who were caring for their son.

Not even the Royal Family was off limits to Murdoch’s predators:

The BBC and The Guardian, in their Monday reports, cited internal e-mails from a News of the World archive in which requests were made for about $1,600 to pay a royal protection officer — one of several hundred Scotland Yard officers eligible to serve in the palace security detail — for classified information about the queen, Prince Charles and other senior members of the royal family in what a Scotland Yard official described as a major security breach. The Guardian article said two officers on the royal detail were involved and that the e-mails from an archive assembled by The News of the World were exchanged by a senior executive and a reporter, neither of whom it identified.

The accounts said the money was used to obtain a copy of a contact book used by the royal protection service — a volume known as the Green Book, according to the BBC — that contained information about the queen, Prince Charles, other senior royals and their friends and contacts. A report in The Evening Standard newspaper said the information included “phone numbers, and tips about the movements and activities” of the queen and her husband, Prince Philip. A Guardian report said the police had informed the palace that the cellphones of Prince Charles and his wife, Camilla, Duchess of Cornwall, may have also been hacked.

Other alleged hacking victims included prominent union leader Andy Gilchrist. (One of Murdoch’s proudest achievements had been his busting of the newspaper print union.):

Detectives are looking into allegations that a second newspaper at Rupert Murdoch’s News International may have used hacked voicemails to publish stories about the private life of a prominent public figure.

Andy Gilchrist, a former union leader, has asked Scotland Yard to investigate his belief that interception of his mobile phone messages led to negative stories about him appearing in The Sun at the height of an acrimonious national strike by the Fire Brigades Union (FBU).

He is the first public figure to suggest that the illegal technique was carried out for stories that ran in News International’s best-selling daily title, rather than its Sunday red-top, the News of the World (NOTW).

One of the stories, headlined “Fire strike leader is a love cheat”, appeared in The Sun during the first week of its editorship by Rebekah Brooks following her transfer from the NOTW.

As News International’s chief executive, Ms Brooks, née Wade, is leading the company’s defence against claims that phone hacking was rife at its headquarters in Wapping, east London.

Then there’s the case of a couple of formerly anonymous sex bloggers turned authors, Brooke Magnanti and Zoe Margolis who suspect that spyware attached to emails from News International’s Sunday Times that when opened downloaded trojan programs to monitor their communications.

Murdoch’s influence over the current Prime Minister, David Cameron, was demonstrated when the latter selected Andy Coulson to be his press spokesman. Coulson was the editor of News of the World during its most active hacking years. He was arrested last week for bribing police officers, paying $500 each for cell phone numbers whose GPS co-ordinates were used to track their owners/ movements could be tracked at any one time. Also arrested was the paper’s royals correspondent, Clive Goodman. No doubt other victims of the Murdoch machine will surface.

As J.Edgar Hoover knew all too well, information is power. Murdoch has ruthlessly used his media empire to become the most powerful and feared man in England, bending prime ministers, journalists, and even the police to his will. But it appears that Murdoch’s karma is finally catching up to him. Next week he and his son, James Murdoch, News Corp’s Deputy Chief Operating Officer, as well as News International CEO Rebekah Brooks are scheduled to testify before a special panel convened by Parliament.

And on the other side of the pond, Murdoch’s problems are just beginning. Senators Rockefeller, Boxer, and Lautenberg submitted a letter yesterday to the Justice Department to investigate whether, among other things, News Corp violated the Foreign Corrupt Practices Act. The SEC will likely enter the picture pursuant to a lawsuit filed this week by some of News Corps stockholders. And Rep. Peter King from New York has asked the FBI to investigate whether Murdoch’s goons hacked the phones of 911 victims’ families. Today, the FBI complied, and opened a formal investigation.

Notwithstanding the billions of dollars of revenues his US holdings generate, News Corp not only managed to not pay a dime taxes last year but got a tax rebate from the US taxpayer for some $4.5 billion.

But Murdoch’s days as the Great Untouchable may be coming to an end. As John Lennon sang it, instant karma’s gonna get ya. No where is this more evident than in the hit that News Corp is taking in the markets, losing some 14% of it value in the days immediately following the most egregious of the hacking revelations, mitigated somewhat by Murdoch’s announcement that the company is going to spend $5 billion repurchasing some of its own stock to keep its price up.

Over the longer term, the biggest threat to Murdoch’s US holdings is the licensing power of the FCC. In granting broadcasting license, character counts. If the FCC determines that the Murdoch is running a criminal enterprise, O’Reilly, Hannity, and company may find themselves looking for another employer.