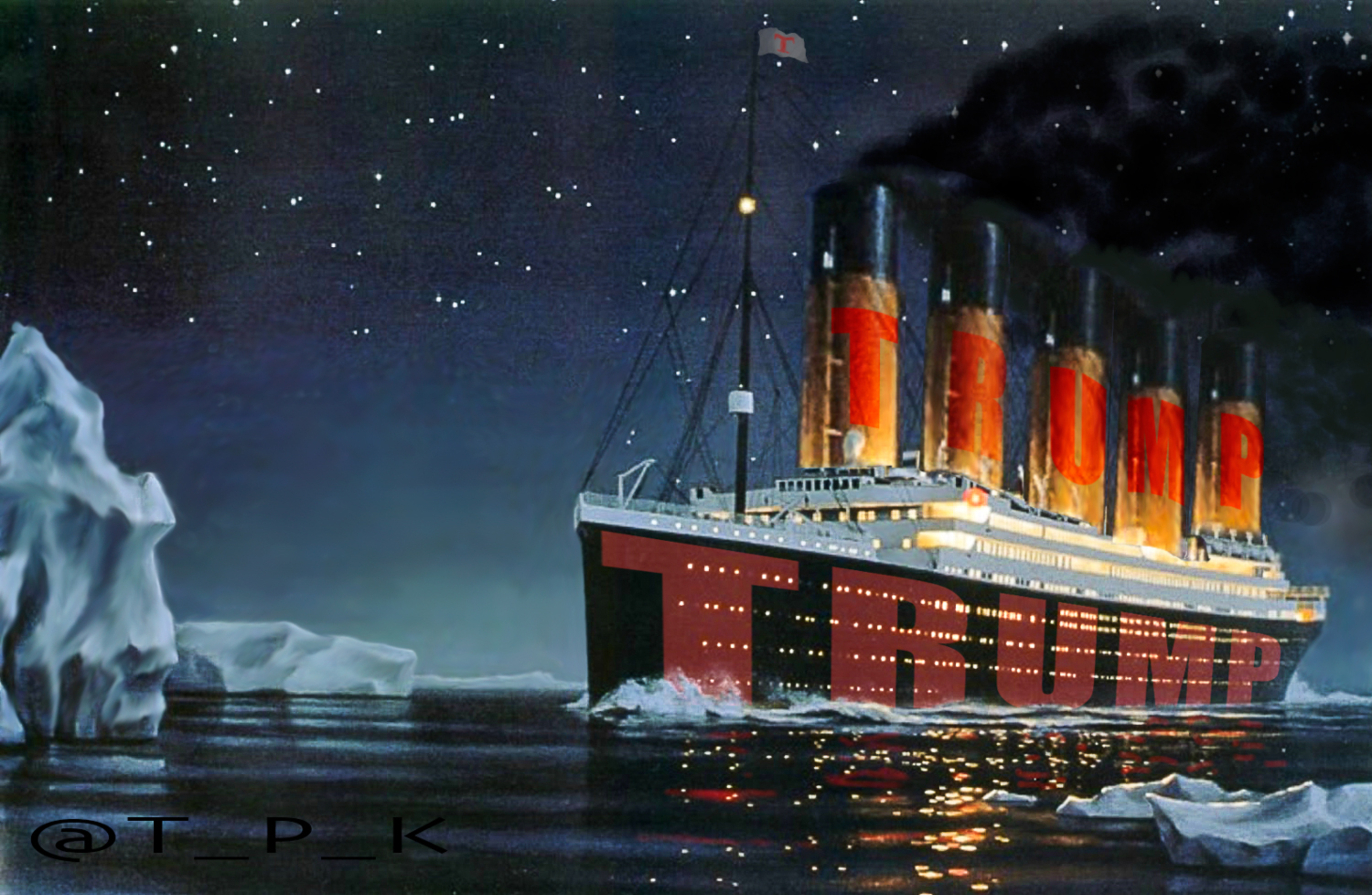 It’s all-ahead flank right now, but some of us already knew where this leviathan shit-scow was headed.

The Floridians, North Carolinians, Missourians, Illinoisans, and Ohioans have spoken out of both sides of their collective mouths, and it was Drumpf on the right, Clinton on the left.

But keen observers of our political dialogue aside, very few Americans seem to have a grip on just where the magic ‘Merican merchantman— the Drumpf tramp steamer— is really headed.

Super Duesday may have come and gone, but the Drumpf rolls ahead on a wild bore tide¹, while Rubio’s home state faceplant has perhaps exacted the ultimate toll— the end of his brief but pointless political career.  Kasich on the other hand, has finally gotten underway with a hollow pyrrhic victory, circling compass-less in his safe Ohio harbor;  but because “Never give up, never surrender,” we can expect he and Cruz will appear to chase after and harass their uncontrollable Republican dreadnought, the SS Donald Drumpf— until they reach what they’re still pretending will be a “convention” and not a bloodbath.  And very soon now, Americans, it will be time for you to pay your dues.

But our “government” has become little more than a cash cow, infiltrated by a shitload of craven, greedy, unfit opportunists.  The scum we have now are bald-faced shills for moneyed interests;  if you’ve been paying attention, you know who most of them are.  They are men and women who have allowed and even facilitated the usurpation of unwarranted power by the legislative and judicial branches;  they have repeatedly and intentionally endangered our democracy for their personal aggrandizement.

They have carelessly facilitated the machinations of ignorant and superstitious agitators, and now one of them is about to become the nominee of their “party.”

They have encouraged the retardation of scientific progress, by knowingly denying the approaching catastrophe of the destruction of our atmosphere, our oceans, our lands.  Their “governance” is at a standstill, thanks to the stalemate of the dominance of their own pernicious mediocrity.

They have debased themselves by becoming the lackeys of a vicious minority:  also known as the “1%.”  They have created an ignominious leviathan, an ambitious and clever pathological liar and would-be dictator.

They have courted and cultivated the failure of social and economic fairness among our people.

In their Godlessness, they encourage the unholy union of church and state.  And they have crafted the loss of much of our personal liberty.

But the truly heinous aspect of these so-called “leaders” is their shallow indifference and hypocritical disregard for the welfare of the United States ship of state* and its people, at the expense of their rapacious embrace of ruthless money politics at whatever the cost to our nation.  It’s a perverse form of greed;  the two party system has devolved merely to facilitate it, while it pits a red group of have nots against a blue one.

The disinterested, non-voting, and undereducated citizens of this nation better wake the fuck up.  This shit storm is coming, and we all had better learn to batten down the hatches.

¹  A bore tide is a tidal phenomenon in which the leading edge of the incoming tide forms a wave, or waves that travel up a river or narrow bay against the direction of the river or bay’s current.

*  The Ship of State is a metaphor put forth by Plato in Book VI of the Republic in 380 B.C.
It likens the governance of a city-state to the command of a naval vessel, and ultimately argues that the only men fit to be captain of such a ship are “philosopher kings,” who have access to the Form of the Good.

Plato establishes the comparison by saying that God was one of the best models of describing the steering of a ship as just like any other “craft” or profession— in particular, that of a statesman.  He then runs the metaphor in reference to a particular type of government:  democracy.

Plato’s democracy is not the modern notion of a mix of democracy and republicanism, but rather direct democracy by way of pure majority rule.  Plato’s Socrates compares the population at large to a strong, but nearsighted shipowner, whose knowledge of seafaring is lacking.  The quarreling sailors are demagogues and politicians, and the ship’s navigator, a stargazer, is the philosopher.  The sailors flatter themselves with claims to knowledge of sailing, though they know nothing of navigation, and are constantly vying with one another for the approval of the shipowner so to captain the ship, going so far as to stupefy the shipowner with drugs and wine.  Meanwhile, they dismiss the navigator as a useless stargazer, though he is the only one with adequate knowledge to direct the ship’s course.