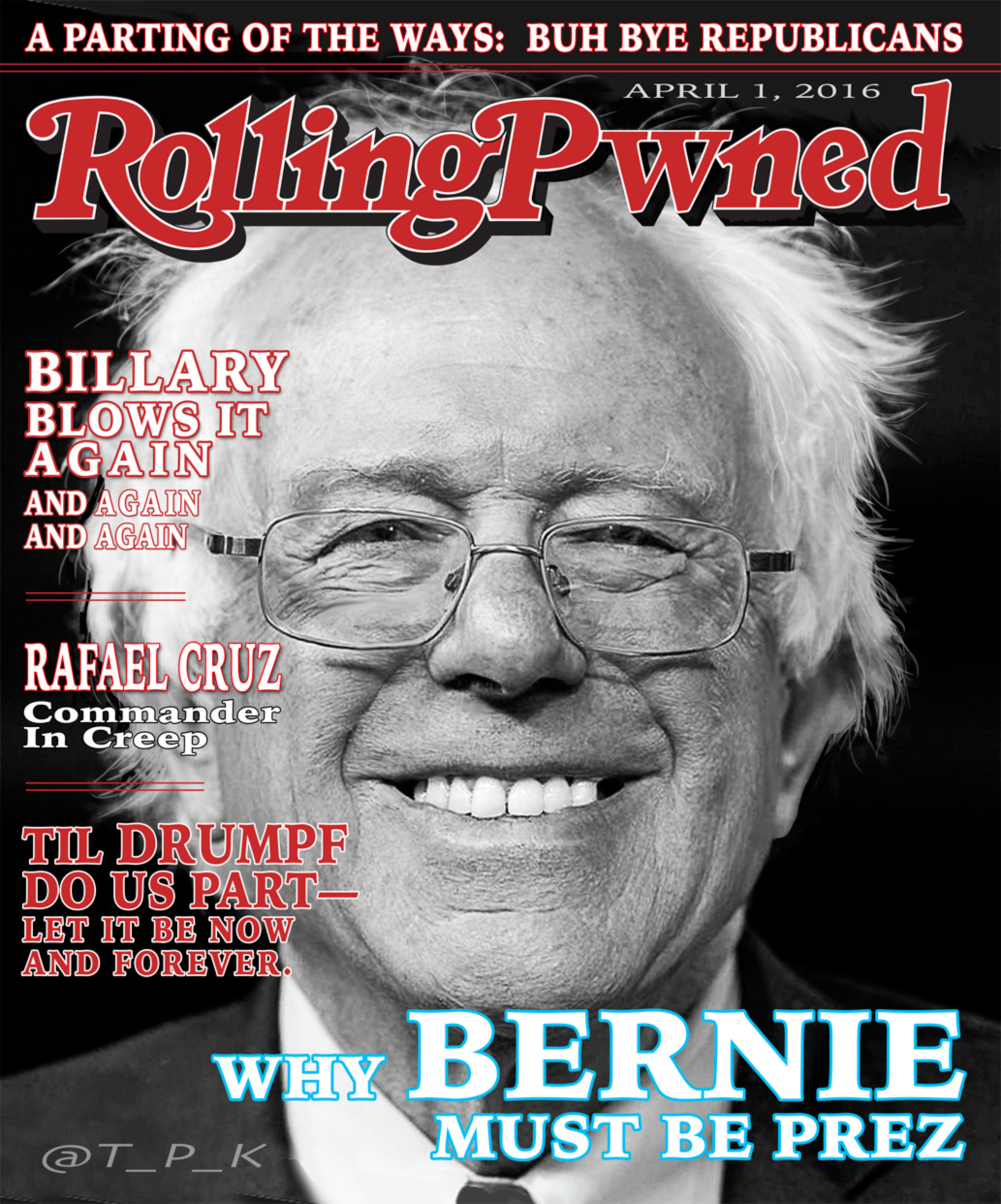 Don’t let those punchy headlines fool you;  it’s the black and white Bernie who’s telling it like it is.

My twenty-one year old car is old enough to vote, and like Bernie Sanders, is time-worn and tested to go whatever distance.  Like anything worthwhile it requires occasional maintenance, so it was off to Mike the mechanic today for a checkup.  I spent some time in the waiting area, and what I found there, totally hot off the press, was Bernie on the cover of the RollingPwned™.

I heard that, “The what??”  Now I’m no RollingStone subscriber or reader.  I just bump into it more or less irregularly in the circles I travel in, thus I’m a longtime fan of Ralph Steadman and Hunter Thompson in the past and Matt Tiabbi in the present.  But it’s a total coincidence that I learned of the recent endorsement of Hillary Clinton in a recent edition of RollingStone by co-founder, Jann Wenner;  a few days before I discovered this RollingPwned™ in the wait room of an auto repair shop today.
Wenner shorter:  I’m not impressed by multi-millionaire Wenner’s idea of what constitutes his “reality of modern America.”  Like so many other Americans, he’s willing to be told by Clinton what is possible and what is not.  And his dolorous “I have been to the revolution before— It ain’t happening” shtick is pathetic.

So.  I’ve gotta spend a few good hours with this mag, even though I already know why Bernie must be Prez; and the other articles promise to be more than entertaining.

The new Democratic version of idealism came in a package called “transactional politics.” It was about getting the best deal possible given the political realities, which we were led to believe were hopelessly stacked against the hopes and dreams of the young.

For young voters, the foundational issues of our age have been the Iraq invasion, the financial crisis, free trade, mass incarceration, domestic surveillance, police brutality, debt and income inequality, among others.

And to one degree or another, the modern Democratic Party, often including Hillary Clinton personally, has been on the wrong side of virtually all of these issues.

Because:  You’ve been to one party, you’ve been to them all.  It’s time to surf. Because every few seconds, another wave washes towards humanity, and if he will catch it, he will ride reality anew.