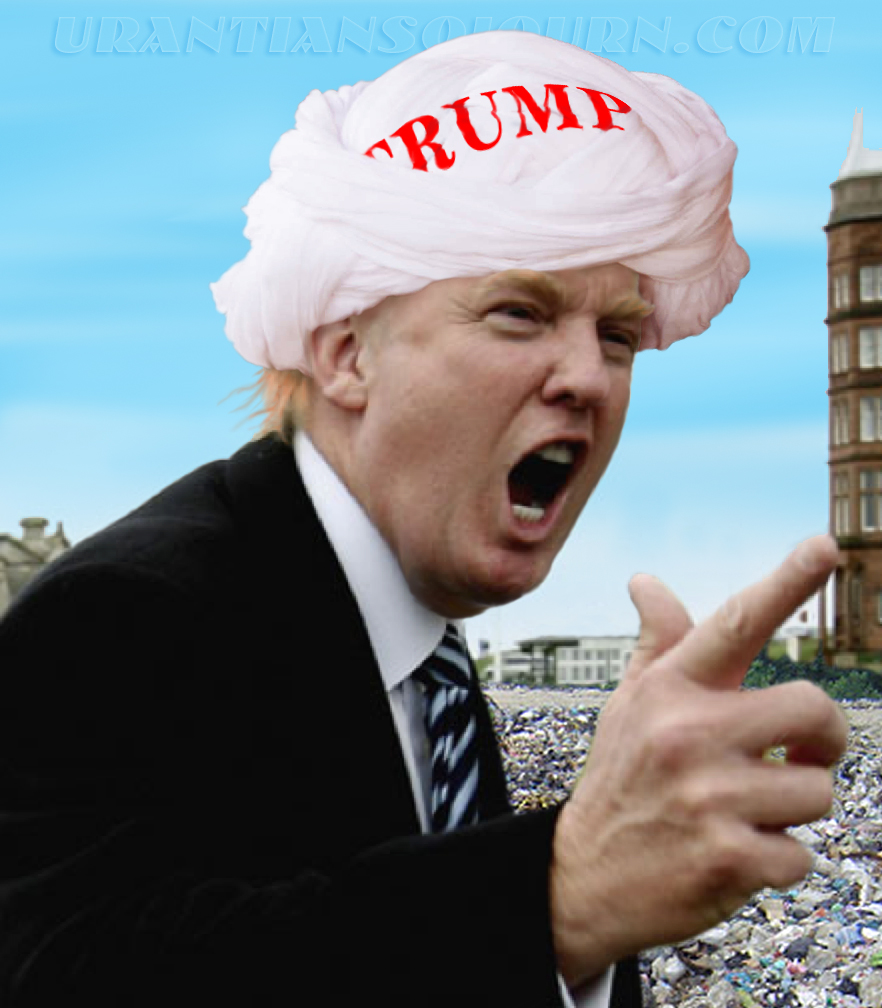 Last week was widely believed to be Donald Drumpf‘s worst week on the campaign trial to date. On the foreign front, he suggested that decades of nuclear non-proliferation be scrapped, arguing that Japan, South Korea, and Saudi Arabia should get themselves some nukes. He doubled down on that by saying NATO should be scrapped. On the domestic front, he proclaimed that women should face criminal punishment for having an abortion. He doubled down on that as well, saying that the men who get women pregnant should bear zero consequences, bringing to mind an earlier post of ours titled: Ayatollah Santorum & The Republic(ans) of Gilead, that referenced and even earlier post: Coming to America: The Handmaid’s Tale.*  Well, move over Rickster, and make room for The Ayatollah Drumpf.

The fur flew fast and furious over Drumpf’s remarks on women and abortion.  Katha Pollitt from The Nation and Gail Collins from The New York Times last week offered op-eds on the same page of the Times. Pollitt noted the hypocrisy of John Kasich and Ted Cruz‘s seemingly outraged rebuttals to Drump’s statements. Re Kasich, Pollitt wrote:

Mr. Kasich has signed 17 anti-abortion measures into law since he took office in 2011. Half the clinics in Ohio in operation at the beginning of his tenure have closed or stopped performing abortions.

I’ve also heard that he cut a million bucks from Planned Parenthood. As for Cruz, she writes:

In a statement, Senator Ted Cruz of Texas said, “Being pro-life is not simply about the unborn child, it’s also about the mother.” He would permit legal abortion only to save the woman’s life — no exception for rape and incest victims — and tried to shut down the government in his effort to defund Planned Parenthood…

Beyond the current GOP presidential field, Pollitt reminds us of the larger war against women:

Abortion opponents claim that, before Roe v. Wade, anti-abortion laws never went after women. This is not entirely accurate: Oklahoma criminalized the woman as well as the provider. Women didn’t go to prison before Roe, but they were punished. They were forced to remain pregnant under even the direst circumstances. If they rejected that fate, they were forced to self-abort or seek illegal providers, risking death and injury. They were interrogated by the police, subpoenaed and forced to testify in court against their provider.

Today, the law is still going after women for abortion. In Indiana last year, Purvi Patel was sentenced to 20 years in prison for what the prosecutor charged was an illegal self-abortion. In Tennessee, Anna Yocca was charged with attempted murder for trying to end her pregnancy with a coat hanger. In Pennsylvania, Jennifer Whale went to jail for giving her daughter abortion pills. Have our kinder, gentler abortion opponents spoken up for any of these women?

Around the world, countries — El Salvador, Mexico and the Philippines among them — sometimes jail women who obtain illegal abortions. In 2013, Ireland approved a law with a very narrow exception for the life of the mother. That is paired with up to a 14-year prison sentence for women and providers for abortions that don’t pass the test.

While Pollitt goes on to point out what a disaster Drumpf is proving be for the anti-abortion movement, Collins brings that salient political point home:

Maybe Donald Drumpf did everyone a favor with his famous jail-the-women comment. When he blurted out that “there has to be some form of punishment” for anyone who has an abortion, he blew the cover off the carefully constructed public face of the anti-choice movement.

There’s no reason to imagine Drumpf ever gave a millisecond of thought to the details of abortion policy until he got trapped in that merciless interview with Chris Matthews on MSNBC. There are certain right-wing tropes that he just grabbed onto when he started his presidential run. One is that whenever the topic comes up, he’s supposed to announce he’s “pro-life.”

“I know,” Matthews followed up, adding, “But what should be the law?”

Drumpf babbled about totally unrelated topics, but Matthews, cruel man, pressed onward: “If you say abortion is a crime or abortion is murder, you have to deal with it under law. Should abortion be punished?”

“Well, people in certain parts of the Republican Party and conservative Republicans would say yes, they should be punished,” the candidate replied.

Wow. Drumpf both passed the buck and smashed the anti-abortion movement’s most basic sales pitch: that their war is about protecting fully developed fetuses from being murdered in the womb. The fact that more than 90 percent of abortions happen in the first trimester, that shutting down Planned Parenthood clinics robs low-income women of health care and family planning services, is beside the point. You’re not supposed to admit that stopping abortions limits women’s choice, and heaven knows you don’t say you’re punishing them.

“You never blame the woman, you paint her as a victim.” said Robert Jeffress, a Dallas pastor and Drumpf supporter who was one of the very, very few anti-abortion public figures who didn’t cringe and demand that Drumpf walk back his comments. “That conservative orthodoxy has been born out of political expediency rather than logic.”

Ooops. What was that about the Emperor’s missing wardrobe?

SNL presents two female perspectives on Donald Drumpf; one with and one without a brain

While Drumpf has brought his considerable experience with tabloid/celebrity journalism to bare on the GOP presidential battle, enabling him to manipulate the media’s desire for ratings to their mutual benefit, his most innovative tactic was to throw away the dog whistle and target his racist and misogynist appeal directly to his constituents’ ids. For decades the GOP has used coded language―camoflage―to appeal to what is now Drumpf’s largest and most loyal constituency: alienated, racist, misogynist, underpaid white males. (His support among women in general is an anemic 30% or so, polling best among “security moms,” terrified that their children will be slaughtered by Muslim terrorists, a scenario that he regularly reinforces by his pledge to block any of the world’s 1.6 billion Muslims from entering the country.)

The blowback from his remarks was so strong that he immediately tried to “walk them back” (a favorite talking-head euphemism these days). He first blamed MSNBC for maliciously editing his remarks out of context; and when that was shown to be false, fell back on his tried and true get-out-of-jail-free-card: his claim that he’s not a politician, an excuse his followers readily adopt when pressed about his many contradictory positions and remarks. (In their eyes, Drumpf’s ignorance and incurious approach to complex matters isn’t a bug; it’s a feature.)

Perhaps the wheels are finally starting to fall off the improbable Drumpf war wagon. More’s the pity, as his nomination would all but guarantee that the Dems retain not only  the presidency, but regain control of the Senate, the US Supreme Court; and a distant possibility, the House as well.

But credit where credit is already due. Drumpf, our favorite bull in the GOP china shop, has already succeeded in destroying any remaining illusions that the Republican establishment serves the real needs of women, racial minorities, the middle class, and its poorer and less-educated largely white male constituents. He has caused a near melt-down among conservative media pundits. And now with his fumbling of the abortion issue, he’s undermined forty years of post-Roe v Wade political strategy.

Of course, clinics dedicated to women’s health care will continue to close under Republican governors, and attempts to defund Planned Parenthood at the state and federal level will proceed on schedule. But the myth that this part of the conservative agenda is serving the needs of women gives the lie to their whole criminalization argument, which logically leads to a punitive regime for women, if not in law, then most certainly in reality.

*From the WikiP entry:

Set in the near future, in a totalitarian theocracy which has overthrown the United States government, The Handmaid’s Tale explores themes of women in subjugation and the various means by which they gain agency… in the Republic of Gilead, a country formed within the borders of what was formerly the United States of America. It was founded by a racist, male chauvinist, nativist, theocratic-organized military coup as an ideologically driven response to the pervasive ecological, physical and social degradation of the country.

Beginning with a staged terrorist attack (blamed on Islamic extremist terrorists) that kills the President and most of Congress, a movement calling itself the “Sons of Jacob” launched a revolution and suspended the United States Constitution under the pretext of restoring order.