. . .But at least he has finally revealed who, and what he is. 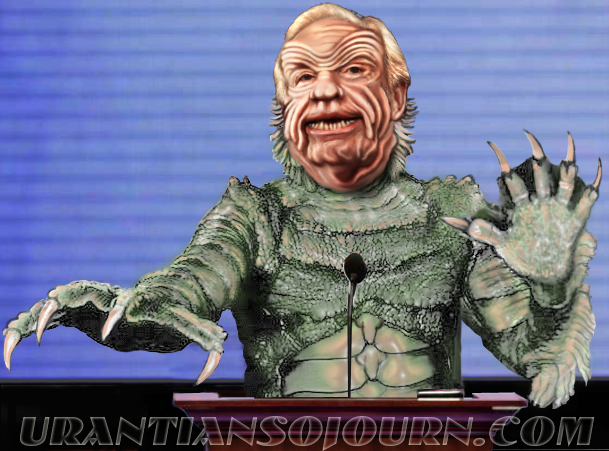 This really isn’t about Joe. Joe is only the most recent and egregious example and one of many elected creatures from the black lagoon, that especially fetid, artificial pool of accumulated amoral political effluent polluting our political system. Creatures without principles who don’t care who knows it.

There really is no other way to explain his extraordinary reversal of principle in three months time. How else explain the empty dribbling opportunism as Lieberman plumbs the depths of valueless shilling; justified by telling himself that what Joe wants, must be what the people want;  that he was elected to do what he wanted, never what the majority of his constituents wanted.

BASH: [To Lieberman] Any chance Joe Lieberman would run as a Republican?

LIEBERMAN: I don’t know what I’ll run as. I like all the attention being an independent has garnered me, so that’s definitely a possibility, but I’d say that all options are open for business.
Including, of course, still running as an “Independent” Corporate Whore,  just like now, or maybe something with a little more flare, like uh.. a Lieberpublican, or a “Liebertonian,” or “Liebermanican,” or, you know, a “Liebermaniac,” a Liebrechaun,  a Liebercrat,  Liebermenschkin. . .

LIEBERMAN: Yeah. It’s unlikely that I would run as a Republican, you can stick a fork in them— but as someone tirelessly dedicated to myself, I just would not foreclose any possibility with the slightest chance of inuring benefit to myself.

Fun factoid:  Did you know that Lieberman’s last book was titled, “In Praise of Public Service”?

Sen. Russ Feingold (D-Wis.), a vocal supporter of the deceased public option, thinks it’s unfair to blame Lieberman for its apparent demise.  Feingold said that “responsibility ultimately rests with President Barack Obama and he could have insisted on a higher standard for the legislation.”

Yeah. “Insist” Mr President; scream and holler; threaten and cajole; throw stuff. . .  After all, you’re the one ultimately responsible for the clusterphuque they hand you.

“This bill appears to be legislation that the president wanted in the first place, so I don’t think focusing it on Lieberman really hits the truth,” said Feingold.

No, probably not, Senator, any more than your remark that the afterbirth you’ve thrown in a bag resembles the “legislation that the president wanted in the first place.”

F’n Duh. Congress bends over, blows itself instead of getting the real job done, and blames Obama for getting a blow job, what “. . .he wanted in the first place.”  Give me a puke bag.

Barack Obama has said the status quo is unacceptable, and yet that is precisely what we are witnessing in slow pirouette, an ever-unfolding spiral of delay, obstruction, polarization, and failure; failure to do the will of the people.  Our system has devolved to malignancies that guarantee gridlock and ensure failure, and create increasingly bitter division among Americans, nurtured by those with a willingness to confuse by dissembling and prevarication, to thwart any  necessary and long overdue progress in social reform.

But of course we allow our politicians to be paid by corporations huge sums more than what we pay them;  so whom do you suppose they really work for?  US??

And since this government run for Corporate America is in the process of making sure they have as much of our collective wealth as they might require to continue prospering beyond our wildest dreams, not excluding our wild and crazy dream of stabilizing our economy by buying ourselves health care with our own money, collectively sharing in the burdens and the benefits of our “representative democracy,” so that all Americans, and someday all men and women, can live a life of freedom from fear, freedom from want, and freedom from— bla bla bla bla bla— Well, sorry children;  the Corporate Overlords said NO.

Now get back to your various hovels, grow old if you’re lucky, get sick, and die.