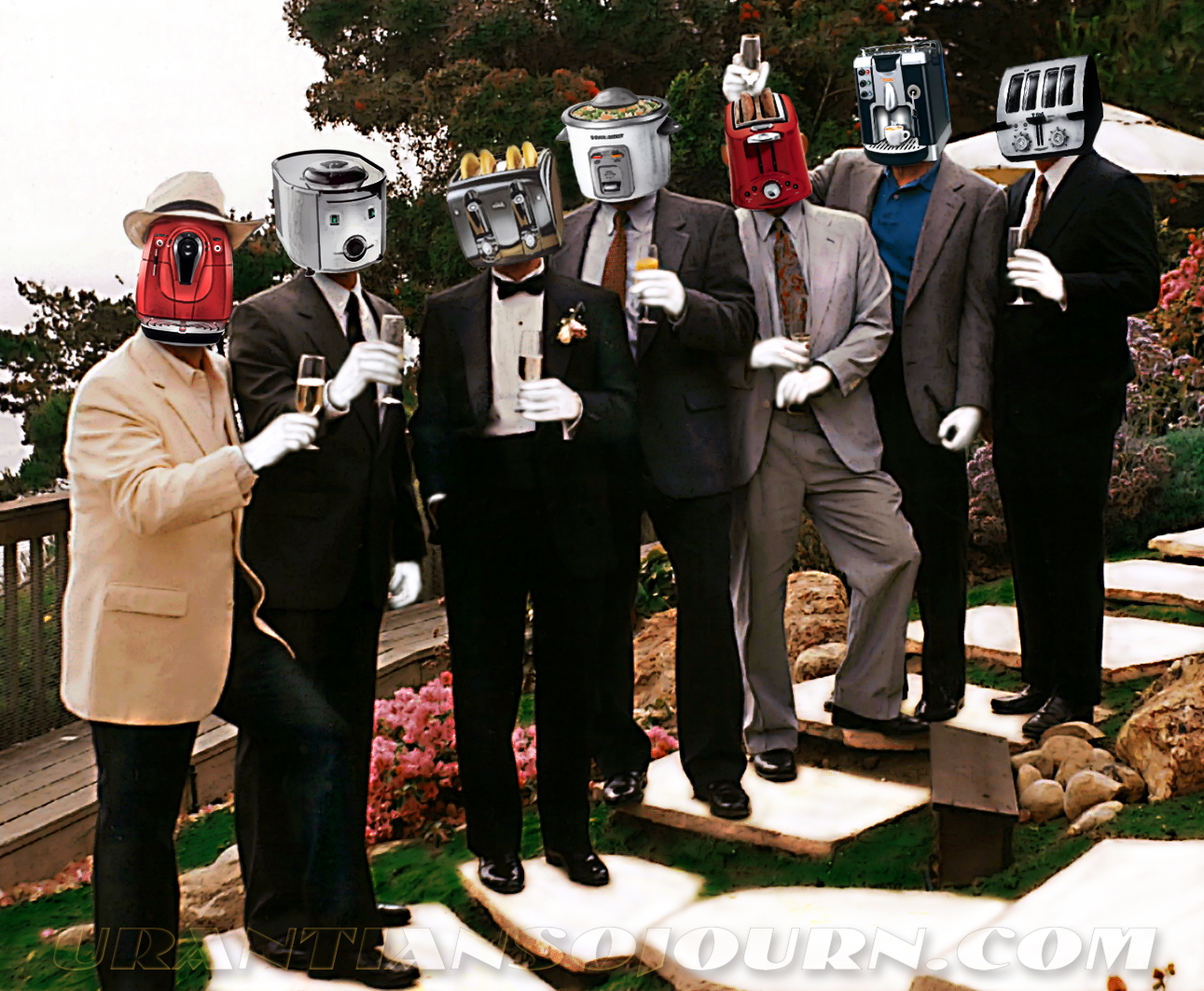 Honestly?  Appliantologists f’n freak me out. But if they want to celebrate Zappadan, more power to them. Gettin loaded from lft: L. Ron Hoover, Sy Borg, Bick, John Revolta, Tom Krewz, Gionova Ribsissi, Bodhi Dwarfman.
If you want to taste their toast, you must click it.

“How about that? You hold on to the tin cans and then this guy
asks you a bunch of questions, and if you pay enough money you get to join
the master race. How’s that for a religion?”
— Frank Zappa,  to a concert audience at the Rockpile, Toronto, May 1969

I LIKE TOAST.  Well, no— I love toast.  But I’m not a “toaster head.”  You know—  a little kitchen machinery that you plop a little— or a lot of dough into its metal slit, charge it with some electric mystery mojo, and up pops some half-toasted nonsense about life that is an insult to your meager cosmological coherency.

Frank Zappa leveled some stinging musical satire at The First Church of Appliantology, and never demonstrated much reluctance to share his opinions on churches, politicians, and other self-appointed interpreters of moral turpitude. (Robert Novak, you’re dead now, so STFU.)  The few comments below by Frank, giving over the years here and there, aren’t infallible truths set into stone tablets that are kept in a vault in one of the better neighborhoods of Encino;  they’re just some things he felt and believed.  I agree with some of them, and disagree with others, and like him, I’m not shy about spewing my opinions around like creamed corn. . .

HYYYeah, 1984 was still in the air.  Reagan told us:  It’s morning in America, suckers;  better wake the fuck up.

“There is no such thing as a dirty word.  Nor is there a word so powerful,
that it’s going to send the listener to the Lake of Fire upon hearing it.”
—Frank Zappa

Upon hearing it, or any other time.  And there is no “Lake of Fire.”
It’s just a ridiculous fable that must die a painful and swift death.

The essence of Christianity is told us in the Garden of Eden history. The
fruit that was forbidden was on the Tree of Knowledge. The subtext is, All
the suffering you have is because you wanted to find out what was going on.
You could be in the Garden of Eden if you had just kept your fucking mouth
shut and hadn’t asked any questions.”
— Frank Zappa, Interview, Playboy, May 2, 1993

It doesn’t take a musical genius to understand and expose the discredited and outworn mythology surrounding the historical Adam and Eve. Figure it out.  Humans today can’t tell a simple story the same way two weeks running; why does anyone believe that before there was printing, mankind was able to preserve the truth of the Adamic Story for over 37,000 years?

Some days it pisses me off that much of intelligent, clear-thinking contemporary society remains so abysmally ignorant regarding the origins of our planet, of life, of the Universe, of the world of spirit; of the real Adam and Eve; of Jesus Christ, of the Divine, of the Infinite Creator of all things and beings.  But the truth is crazy simple: no one can make you do your epistemological homework but you.  Consequently, if the growing cultural disaster is to be avoided, certain economic adjustments and social changes are imperative. Start here. 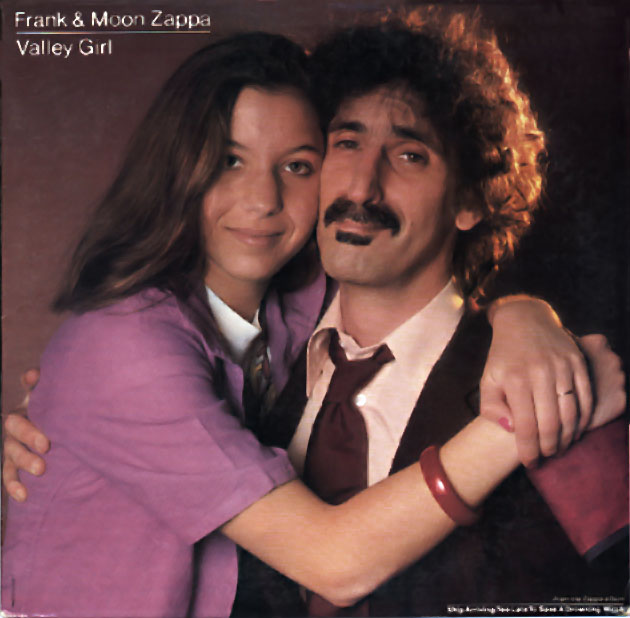 “My best advice to anyone who wants to raise a happy, mentally healthy child is:
Keep him or her as far away from a church as you can.”
— Frank Zappa

Yes, and no.  No, because remember?  “Information doesn’t kill you.”  Yes, because the wrong information (from anywhere) can get you pretty fucked up;  e.g.,__________ (Insert congressional Republican of your choice.)  It’s pretty clear that most Judeo-Christian churches— not to mention all others— have serious and varying amounts of erroneous and outdated information circulating like poison through their dogma— the killer of all living truth— and yet they are crumbling before the onslaught of Science, and the increasing love of truth right along side the observation of fact.  The task for any parent then— and child alike— is learning to tell good from bad, right from wrong, truth from error.

“Anybody hear the great news, today? Jimmy Swaggart is under investigation! Oh Ja-eezus!  One day every one of those cocksuckers will get caught!  I understand in the case of Mr. Swaggart, that he claims that it was not multiple encounters with many prostitutes — apparently, only one sweet young thing.  And he did tell Cal Thomas of the Moral Majority that the sex act itself was not fully consummated.  However he did admit to doing something por-no-graphic with the girl. Let’s use our imaginations, ladies and gentlemen.
— Frank Zappa, Opening remarks to “Stink Foot” at the Make A Jazz Noise

Not gonna do it.  But just wait a second, Mr. Bible-wavin’ fornicatin’ non-consumatin’ lyin’ piece a hypoctite— didn’t Jesus say somethin’ about

“Barry, there is no hell. There is only France.”
— Frank Zappa, You Can’t Do That On Stage Anymore

“If you wind up with a boring, miserable life because you listened to your
mom, your dad, your teacher, your priest or some guy on TV
telling you how to do your shit, then YOU DESERVE IT.”
— Frank Zappa, The Real Frank Zappa Book

Well, there it is.  Following the wrong information “can get you pretty fucked up.”  And trust me on this:  We are the architects of our own destiny.  Take it by the horns, Cleetus.  You will get just what you bargain for, sooner or later.

“The crux of the biscuit is: If it entertains you, fine. Enjoy it. If it
doesn’t, then blow it out your ass. I do it to amuse myself. If I like it, I
release it. If somebody else likes it, that’s a bonus.”
— Frank Zappa, interview, Playboy, May 2, 1993 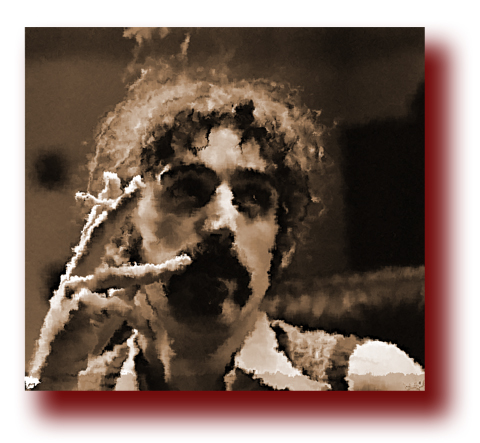