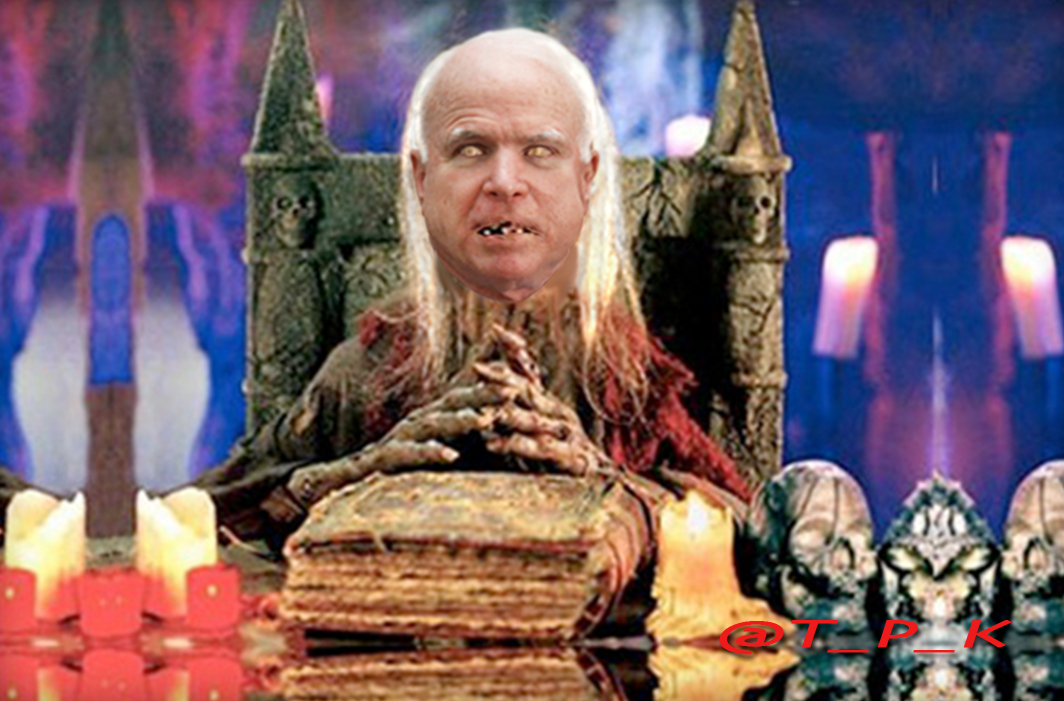 Is it just US (Urantian Sojourn), or is John McCain becoming a decrepit parody of himself?

Just as he has never gotten over being tortured by the North Vietnamese, manifest in his ‘bomb the hell out of ’em’ knee-jerk response to nearly every foreign policy crisis,  he will never get over losing to The Black Man in The White House.

Early in President Obama’s first term, McCain beat the war drums on Iran. During the Arab Spring, he demanded that our default response be to arm every opposition group in sight, despite the fact that many of them are Islamic fundamentalists with Al Qaeda sympathies.  The strategy of “leading from behind” that operated so effectively in overthrowing Libya’s Mohamar Qadaffi, costing not a single American life, makes McCain’s wrinkled and liver spotted skin crawl right off his malformed skeleton. (That skeletal malformation was the result of a crash landing he endured after being shot down over heavily populated Hanoi by the Vietnamese during one of his 23 bombing sorties.) This is a guy who really, really enjoys the smell of napalm in the morning.

Not surprising then that he would immediately jump all over the Benghazi tragedy. Instead of waiting for a thorough investigation of how and why four brave Americans lost their lives (former Chairman of the Joint Chiefs of Staff, Admiral Mike Mullen (ret.), is conducting one such investigation for the State Department), McCain accused the Administration of a political cover-up, supposedly to preserve President Obama’s national security cred in the run-up to the election. Killing Usama bin Laden had effectively neutered what had been a major GOP political advantage, national defense. Given that they had thoroughly tanked the economy under George W. Bush, they had little left to hang their hats on.

A few weeks later, Obama won the election in an electoral landslide and the popular vote by nearly four percentage points. At that point, you would have thought that all the election year cover-up hype would have died a natural death. Not so, when the ever-vengeful McCain catches the scent of blood and feces in the air.

(Perhaps his shattered dreams of being appointed Secretary of Defense in a Mitt Romney administration added fuel to his always simmering anger. How would someone with McCain’s psychological profile confront the loss of an opportunity to do more than just sing “Bomb, bomb, bomb…Iran”? Hadn’t Romney’s biggest donor, Sheldon Adelson, who contributed a record $70 million after saying he would spend whatever it took to defeat Obama, made the price of his support a war against Iran? Thus did another fevered McCain ambition turn to ashes in his hands.)

Instead of confronting Obama directly over the Benghazi snafu, McCain focused his fire on UN Ambassador Susan Rice, the hapless messenger sent out by the White House to explain the ever developing understanding of the events of 9/11/12.  (Funny how the Obama proxies subjected to the most vicious Rethug attacks have all been Black, namely Rice, Eric Holder and Van Jones). In his continuing pogrom against all things Obama, McCain was joined by two fellow Rethug senators,  his BFF,  Lindsey Graham (R-SC) and Kelly Ayotte (R-Maine).  Together, The New Three Amigos reacted to every subsequent intelligence community disclosure with suspicion, if not downright hostility. (See our earlier reports here and here.)

For instance, when former CIA Director and Republican rock star, David Petraeus, confirmed the White House account of how Rice was dutifully relaying talking points provided to her by the intelligence community, they were left sputtering and reaching for a new line of attack. They soon seized upon the difference between the classified and unclassified versions of the talking points. The unclassified version given by Rice omitted mention of Al Qaeda,  and instead tenuously identified the proximate cause as “extremists” reacting to an anti-Muslim YouTube video that had spurred riots around the Muslim world, a theory later deemed untrue, despite testimony eyewitness accounts to the contrary.

The McCain reputation assassin team geared up and leaped into action, once again accusing the White House of altering the talking points for political purposes. And once again, they were shot down by the intel community who said that they had approved the unclassified version in order to protect sources and methods, and for legal reasons “to prevent compromising an ongoing criminal investigation.”

Undeterred, The Benghazi Crypt Keeper nursed his conspiratorial golem back to life from his own withered man boob, claiming that were still “fifty questions”  he wanted answered. Hoping to finally put the issue to rest, Rice traveled to The Russell Senate Building Tuesday, accompanied by the interim CIA Director, Michael J. Morell, to personally answer whatever questions the Amigos might still have.

When the interviews were over, the Amigos immediately flocked to the Klieg lights and tv cameras,where they proceeded to double down on their shoot the messenger campaign. McCain said that he would be “very hard pressed” to support her expected nomination to succeed Hilary Clinton as Secretary of State. And Dear Lindsey had the line of the day when he confessed “Bottom line, I’m more disturbed than I was before.” (Ahem, Lindsey. Your lacey Freudian slip is showing.) Former Amigo Joe Lieberman (I-CON) was also paid a visit but he took a different tack, saying that Rice “told the truth, and nothing but the truth.”

Rice and Morell continued their visits to The Hill Wednesday, stopping by to see Susan Collins (R-Maine), ranking minority chair of the; and Bob Corker (R-TN), a member of the Foreign Relations Committee. Corker picked up the baton and dutifully continued the party line criticism of Rice. Collins unexpectedly opened up a new line of attack, implying that Rice might have also been responsible for the bombings of the Kenya and Tanzania embassies in the mid 1990s when she was assistant secretary of state for African Affairs  in the Clinton administration. One is entitled to ask: If Collins really considers that such a burning issue, why didn’t she bring it up during the January 2009 floor debate that preceded Rice’s unanimous Senate approval as Ambassador to the UN? Prolly because Rice ‘s old job involved policy, not security.

“Questions, questions– vee still have questions!” An endless series of questions, most or all of which have already been answered, as Rachel Maddow pointed out on her show Wednesday evening. All of which leads us to our own question: Just what the hell is all this sturm and drang really about?

Well, Rachel has proposed a rather credible theory that the Rethugs are trying to make Rice so radioactive that Obama nominates John Kerry instead, a scenario that– wait for it–Susan Collins and at least one other GOP senator, Wyoming’s John Barasso, who sits on the confirmatory Foreign Relations Committee, heartily endorsed yesterday. McCain had earlier proffered his support for Kerry.  Naturally, that would create a senate vacancy in Massachusetts. And guess who is waiting in the wings with a ready-to-go campaign organization to run in the special election that would follow? None other than former senator Scott Brown, for whom McCain gushed his support during Brown’s Wall Street financed campaign against consumer advocate Elizabeth Warren.

In a video message released on Saturday, U.S. Sen. John McCain, R-Az., said Brown’s 32-year National Guard career makes him the candidate that understands the complex international dynamics at play in regards to national safety, and the right choice for Massachusetts.

“Just this last week, we saw violence erupt around the world, including Northern Africa and the Middle East. Our embassies came under attack and American lives were tragically lost, including our ambassador to Libya (Christopher Stevens),” McCain said in the video.

“Scott understands the challenges we face, and he has the experience, wisdom and the temperament to influence the choices our nation makes.”

McCain presided over a ceremony in Washington last month where Brown, who won his national seat in a 2010 special election following the death of Sen. Ted Kennedy, was promoted to the rank of full colonel.

Trying to make sense of the Benghazi tragedy is like trying to follow the convoluted twists and turns of a Robert Anton Wilson and Robert Shea Illuminatus! Trilogy novel. The books’ unreliable narrators have nothing on the characters, plots, and conspiracy theories that have emerged from the tragic events of 9/11/12.

In addition to Rachel’s Scott Brown theory, others have surfaced. Perhaps the most intriguing is the “Carterization” theory from historian, Dr. Webster Griffin Tarpley, which includes the on-going purge of some ten neo-con generals and admirals.  It begins thusly:

This year, a cabal of generals evidently believed it could secure the White House for Mitt Romney by staging the Benghazi incident and using it as the signal for a cold coup under cover of elections — probably including computer-generated election fraud — to bring down Obama. They guessed wrong. The goal of Benghazi was an early October surprise to Carterize Obama, and the CIA was commanded by Petraeus.  […]

On the Thursday after the presidential vote, Defense Secretary Panetta ordered Joint Chiefs of Staff Chairman General Martin Dempsey, an ally of Obama, to conduct a wide-ranging review of misconduct by senior military officers. The general public is supposed to think that this review will be mainly concerned with wrongdoing such as adultery, sexual harassment, embezzlement, and the like. But the reality is most likely a purge of officers associated with the pro-Romney coup machinations of September-October 2012.1

As far as a possibMcCain connection, his whole Benghazi media circus show could be one grand psy ops misdirection campaign. But that’s fodder for another day.

UPDATE   (11/29) ThinkProgress draws our attention to an article on Susan Collins official website in which she heaps praise on Susan Rice during her UN nomination confirmation. It concludes:

I can think of no better message to convey to the United Nations and no better messenger than Dr. Susan Rice. I was honored to present her to the Foreign Relations Committee and to enthusiastically endorse her nomination to this important position.

I smell a rat.