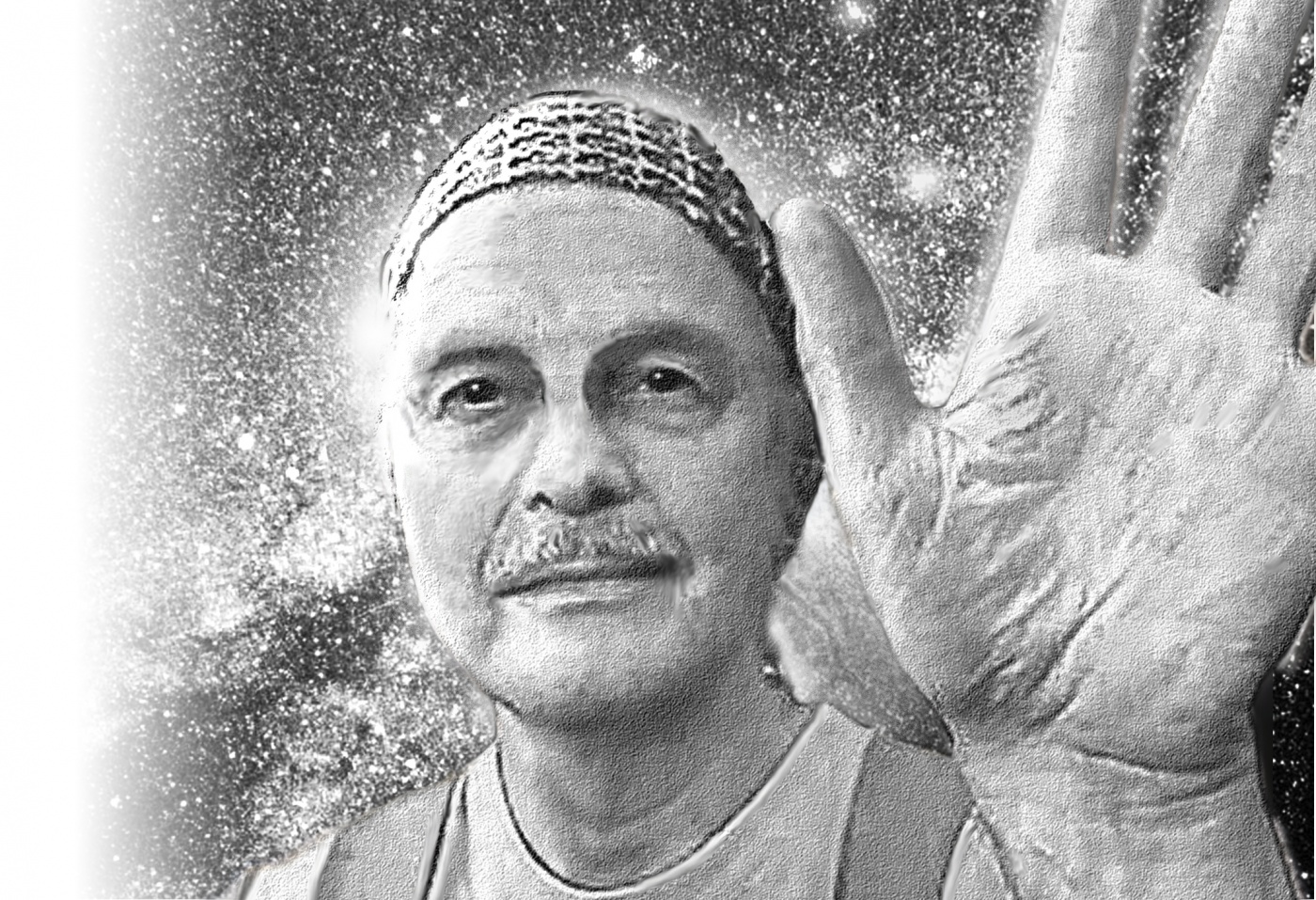 BOULDER, CO —  Around four o’clock Mountain Standard Time this morning,  Stan Hartman left his flesh body once and for all, and headed for the Mansion Worlds.

He left a few decades sooner than anyone who knows him would like, but then it wasn’t our decision.  The cancer that became Stan’s ticket to the next world was painful, to be sure.  But like most things Stan encounters, be bore it with the graceful and manly dignity of a son of God;  something that we have always associated with Stan.

It’s not yet time to publicly reflect on Stan’s earth life.  I’m sure we’ll have a joyful group celebration of his earth life soon enough.  This post is just a memento for the many friends and loved ones he leaves behind, a sort of benchmark wherewith we can distinguish the days when we could depend on seeing him somewhere out in the world, from his more or less sudden departure to his Mansion World resurrection and continuing life.  There’s a few more things worth mentioning in that regard beneath the fold.

Mortal identity on a world like ours is a very transient time-life condition in the universe;  and by design, absolutely no one knows how long they have here.  What’s more, our identity is real only in so far as any person elects to become a continuing universe phenomenon. The Indwelling Spirit is truly our path to Paradise, but each of us must pursue that path by our own deciding and freewill choosing.*

And it is this very power of choice— the universe insignia of freewill creaturehood— that constitutes our greatest opportunity, and in fact, our supreme cosmic responsibility.

Upon the sincerity of the mortal free will the divine Spirit within depends for eternal personality;  upon the faithfulness of mortal choice the Universal Father depends for the realization of a new ascending son or daughter.  All will creatures are to experience one true opportunity to make one undoubted, self-conscious, and final choice;  the soul of man must and will be given full and ample opportunity to reveal its true intent and real purpose.

When the more spiritually and cosmically advanced mortals die on the worlds of time and space, they proceed immediately to the mansion worlds;  the worlds where all who survive the life in the flesh initially continue their existence.  Stan is such a person, and it’s a hoot to know he might be able to watch his own memorial service.   But most of us— yeah I’m looking at me— will be assigned to the ranks of the sleeping survivors, who will be repersonalized en masse at the end of the current planetary dispensation.
Yes, of course, there are some serious difficulties that hamper our efforts to understand just what happens to us in death, just what it is that actually survives death.  One of these difficulties consists in the impossibility of conveying to our level of comprehension an adequate description of a transaction on the borderland of the physical and spiritual realms.  Sorry about that.    Another is brought about by the restrictions placed upon the revelators of truth by the celestial governing authorities of Urantia.  There are many interesting details which might have been presented in The Urantia Book, but our immediate planetary supervisors, sticklers all, nixed most of them.  They know who we are.  But they did say this much:
THE URANTIA BOOK:

There is something real, something of human evolution, something additional to the [Indwelling Spirit], which survives death.  This newly appearing entity is the soul, and it survives the death of both your physical body and your material mind.  This entity is the conjoint child of the combined life and efforts of the human you in liaison with the divine you, the [Indwelling Spirit].  This child of human and divine parentage constitutes the surviving element of terrestrial origin;  it is the immortal soul.

This child of persisting meaning and surviving value is wholly unconscious during the period from death to repersonalization and is in the keeping of the seraphic destiny guardian throughout this season of waiting.  You will not function as a conscious being, following death, until you attain the new consciousness of [soul] on the mansion worlds.

At death, the functional identity associated with the human personality is disrupted through the cessation of vital motion. Human personality, while transcending its constituent parts, is dependent on them for functional identity. The stoppage of life destroys the physical brain patterns for mind endowment, and the disruption of mind terminates mortal consciousness. The consciousness of that creature cannot subsequently reappear until a cosmic situation has been arranged which will permit the same human personality again to function in relationship with living energy.

During the transit of surviving mortals from the world of origin to the mansion worlds, whether they experience personality reassembly on the third period or ascend at the time of a group resurrection, the record of personality constitution is faithfully preserved by the archangels on their worlds of special activities.  These beings are not the custodians of personality (as the guardian seraphim are of the soul), but it is nonetheless true that every identifiable factor of personality is effectually safeguarded in the custody of these dependable trustees of mortal survival.  As to the exact whereabouts of mortal personality during the time intervening between death and survival, we do not know.

The situation which makes repersonalization possible is brought about in the resurrection halls of the receiving planets of a local universe.  Here in these life-assembly chambers the supervising authorities provide that relationship of universe energy— soul, mindal, and spiritual— which makes possible the reconsciousizing of the sleeping survivor.  The reassembly of the constituent parts of a onetime material personality involves:

The fact of repersonalization consists in the seizure of the encircuited [soul] phase of the newly segregated cosmic mind by the awakening human self.  The phenomenon of personality is dependent on the persistence of the identity of selfhood reaction to universe environment;  and this can only be effected through the medium of mind.  Selfhood persists in spite of a continuous change in all the factor components of self;  in the physical life the change is gradual;  at death, and upon repersonalization, the change is sudden.  The true reality of all selfhood (personality) is able to function responsively to universe conditions by virtue of the unceasing changing of its constituent parts;  stagnation terminates in inevitable death.  Human life is an endless change of the factors of life unified by the stability of the unchanging personality.

And when you thus awaken on the mansion worlds of Jerusem, you will be so changed, the spiritual transformation will be so great that, were it not for your [Indwelling Spirit] and the destiny guardian, who so fully connect up your new life in the new worlds with your old life in the first world, you would at first have difficulty in connecting your new consciousness with the reviving memory of your previous identity.  Notwithstanding the continuity of personal selfhood, much of the mortal life would at first seem to be a vague and hazy dream.  But time will clarify many mortal associations.

The [Indwelling Spirit] will recall and rehearse for you only those memories and experiences which are a part of, and essential to, your universe career.  If the [Indwelling Spirit] has been a partner in the evolution of aught in the human mind, then will these worth-while experiences survive in the eternal consciousness of the [Indwelling Spirit].  But much of your past life and its memories, having neither spiritual meaning nor survival value, will perish with the material brain; much of material experience will pass away as onetime scaffolding which, having bridged you over to the next level, no longer serves a purpose in the universe. But personality and the relationships between personalities are never scaffolding; mortal memory of personality relationships has cosmic value and will persist. On the mansion worlds you will know and be known, and more, you will remember, and be remembered by, your onetime associates in the short but intriguing life on Urantia.¹

Indeed.  Here here.  There there.  We’ll miss you, brother Stan;  you know how much we’re looking forward to being in your company again.

* Human beings possess identity only in the material sense.  Such qualities of the self are expressed by the material mind as it functions in the energy system of the intellect.  When it is said that man has identity, it is recognized that he is in possession of a mind circuit which has been placed in subordination to the acts and choosing of the will of the human personality.  But this is a material and purely temporary manifestation, just as the human embryo is a transient parasitic stage of human life.  Human beings, from a cosmic perspective, are born, live, and die in a relative instant of time;  they are not enduring.  But mortal personality, through its own choosing, possesses the power of transferring its seat of identity from the passing material-intellect system, to the higher soul system which, in association with the [Indwelling Spirit], is created as a new vehicle for continuing personality manifestation in the universe.

¹  This entire quote was edited for clarity of terms.