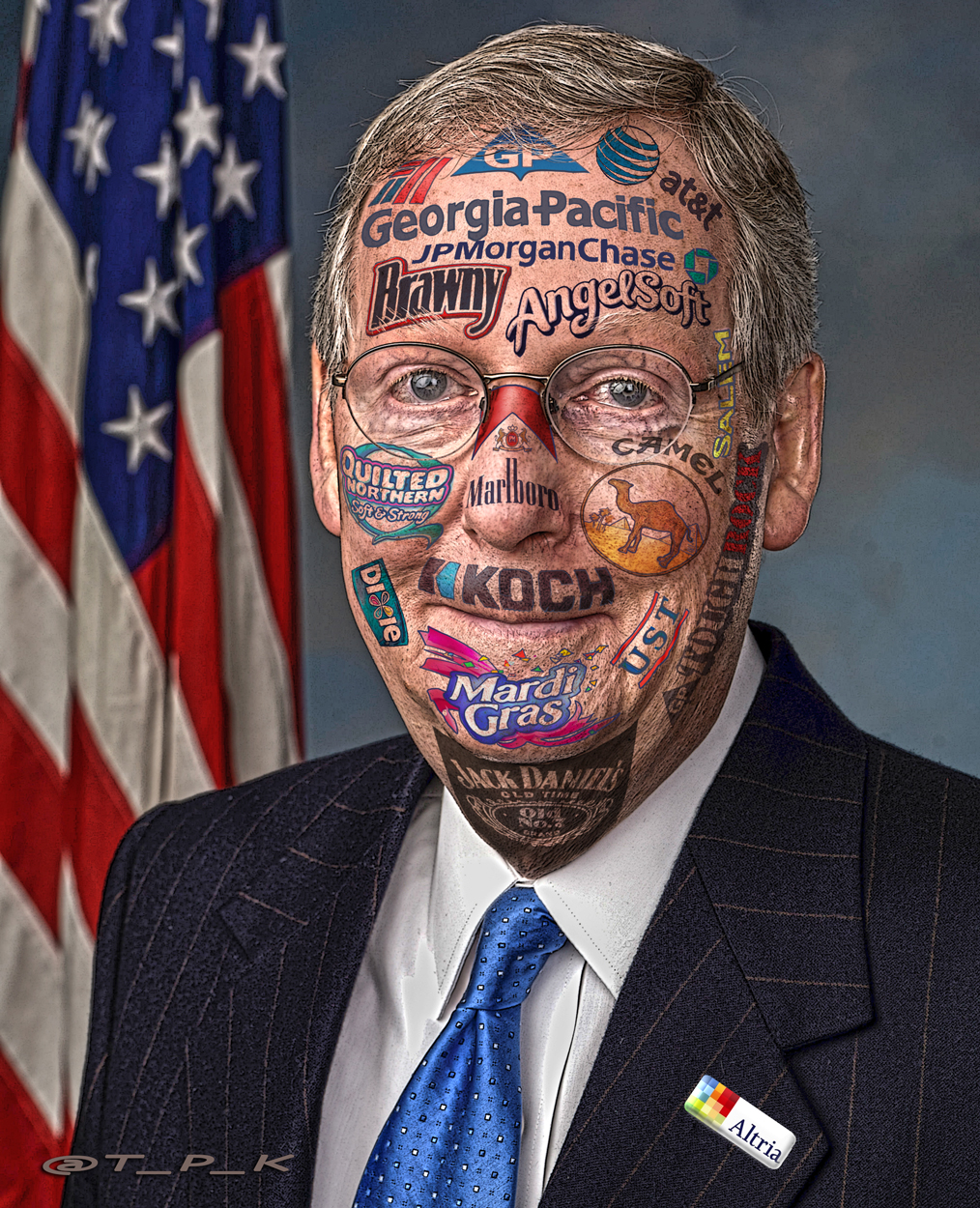 Two words:  Term Limits.  After more than thirty-six years of conducting business for the guvmint, those tats on Addison’s mug represent just a smattering of the corporations and their products that have helped make him the 11th wealthiest member of the Senate.


“The Obama Era (for politics) is over.”
—Howard Fineman

We should start pretending Democrats aren’t too chickenshit to lead start finding ethical ways to get Democrats and Independents to actually VOTE; Mitch McConnell and the RepubliCons have already institutionalized all the unethical ways.

Some talking head actually said “the Republican wave of victory” was the result of “methodical plotting and careful candidate vetting.”  (Perhaps to ensure their candidates weren’t publicly recorded blathering on about second amendment remedies, legitimate rape, not enough guns in church, etc.)  It was, of course, just the usual relentless combination of fear-mongering and propaganda;  e.g., Have a double dose of Ebola pudding with your ISIS coronary, fellow petrified patriots! (Seriously: did anybody read Jacques Ellul’s book?*)  And we must not overlook the gargantuan sums of munny being spewed by the corporate overlards— $3.67 billion, according to the Center for Responsive Politics— which make the soupçon economic-cultural bandaids of new minimum wages in Alaska, Arkansas, and Nebraska and legalized cannabis in Alaska, Oregon, and D.C., seem starkly ludicrous by comparison.

Other talking head chatter awards this latest shift in power directly to the credit of Mitch McConnell, whose strategy of blaming everything that’s wrong in the world on Barack Obama has been wildly effective.  Sure, you may see a picture of Barack sipping alcohol in the Green Room with Addison, but it won’t be Kentucky Bourbon, it’ll be Jack Daniels Old Number 7, (see Mitch’s throat, above) and don’t be surprised if McConnell doesn’t appear to drink a drop.)  And now that they’ve been handed the keys to the same vehicle Obama has finally driven out of the ditch, GOPpers can get back to the business of repeatedly running over ObamaCare and bleeding the last dime out of the dregs of the middle class; or, as they like to call it, “governing.”  LOFL

Roughly sixty percent of Americans didn’t bother to vote in the 2014 presidential election.  It varies from state to state of course, from a low of 28% in Indiana, to 59% in Maine, but generally only a third of the eligible population bothers to show up.  In a word— disgusting.

There are some things we could do to turn this around.  Do like Australia does:  fine the shit out of anyone who doesn’t cast their ballot;  make the fine commensurate with total income, and make it hurt.

Mandatory suffrage would not be without problems, just as it is now in the hands of our uneducated and propagandized majorities.  But the continued election of base, ignorant, and unscrupulous politicians, i.e., (Gohmert, Graham, , Kruz, , King, , Rand, Rubio, Kyl, Mooney, Buck,  etc., etc.) is a very real threat and present danger to our democracy.

Representative government presupposes an intelligent, efficient, honest, and universal electorate.  The character of such a government always depends on the character and caliber of those who compose it.  But when fifty percent of a nation is inferior or stupid or both— and possesses the ballot— THAT NATION IS DOOMED.
The total dominance of mediocrity will eventually spell the downfall of our nation.

* PROPAGANDA The Formation Of Men’s Attitudes 1965; read it and weep.