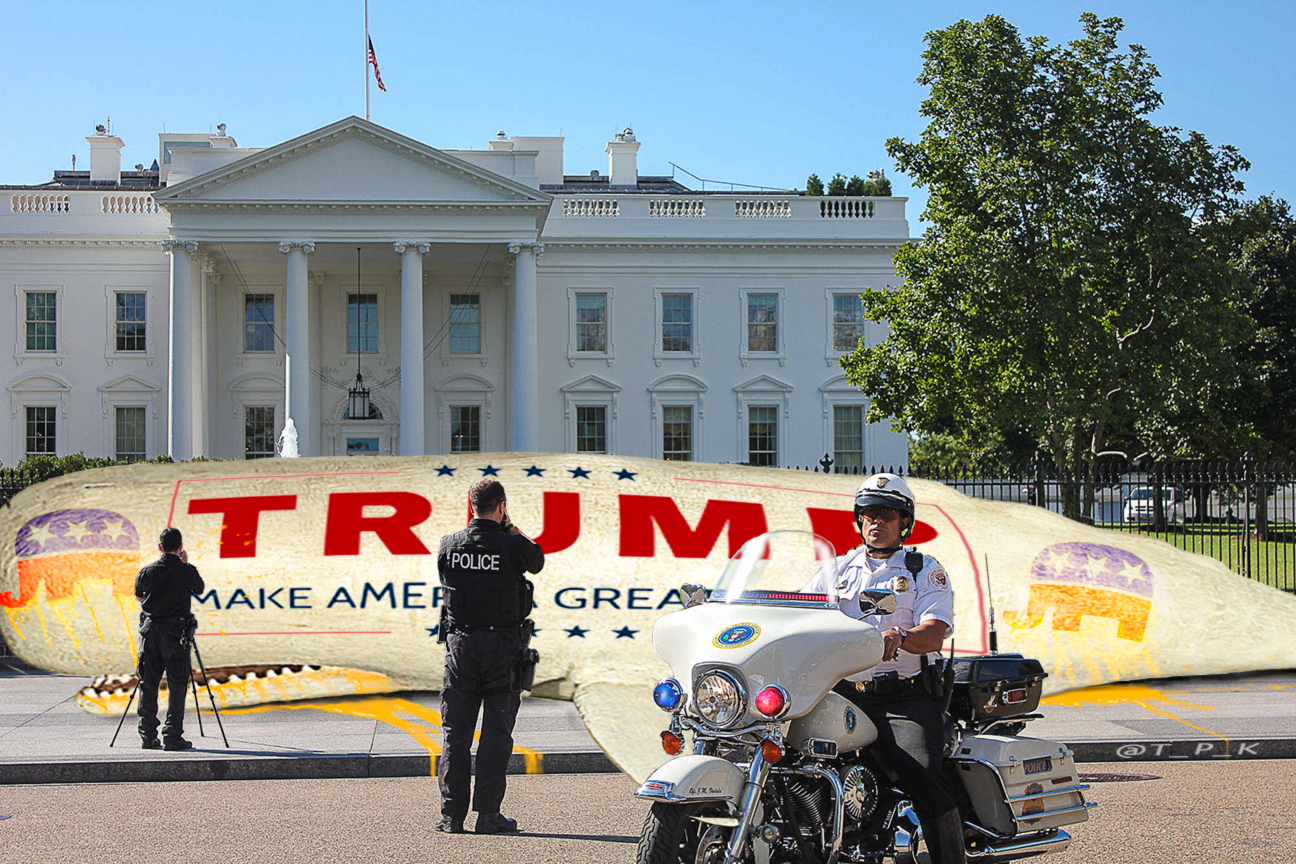 A Great White Whale was found dead on a sidewalk ringing the White House this morning, and officials appear to be dumbfounded as to how it got there.

WASHINGTON D.C. — What appears to be a Great White Whale, commonly found in deep water oceans of the world, was found dead on a sidewalk bordering the White House this morning, and officials appear to be drumpfounded as to how it got there.  No witnesses have come forward to explain exactly when, or how, the enormous mammal came to rest up against the White House fence. Police officers appear to have been the first at the scene.  Officer Edward Balene said the creature had not moved, and had displayed no signs of life;  he confirmed the whale was covered with the GOP elephant graphics fore and aft, port and starboard, so to speak, as well as a prominent Drumpf campaign logo and slogan, “Make Donald Drumpf Again.”

The Washington D.C. Coroner’s office promised a full autopsy of the creature as soon as possible, but said there was strong evidence to suggest the animal’s heart had simply become too small, or “atrophied,” to continue beating. Assistant Coroner Howard Cachalote, who examined the carcass at the scene, said that the “blowhole,” a hole at the top of a Cetacean’s head through which the animal breathes air, was unusually large— even for a creature of this size— and appeared to be conspicuously raw and misshapen.  Cachalote was at a loss to explain the color of the whale’s bright orange blood, which hemorrhaged from both the mouth and the anus of the creature.

Various Republican candidates were quick to lay responsibility for the “metaphorical event” squarely at the feet of President Obama.  “This is an outrage of enormous proportions,” said a “visibly shaken” Donald Drumpf, who volunteered that information during a phone call with the Nantucket Free Press Gazette:  “He’s a bad person, that Obama. Not a good person. Not the best, let me tell you, let me tell you he’s the worst president, destroying, tremendously destroying our country; I wish someone would punch him in the face, I would pay to defend them in court I promise you;  we’re gonna make it great again, this country, we’ll be so tired of winning, I’m telling you.”  Ted Cruz noted Donald Drumpf was the only person, besides President Obama, who “…could conceive of such a wasteful stunt,” while Marco Rubio vowed he would prosecute the president during his first week in office.  He did not indicate which “office” he was referring to.