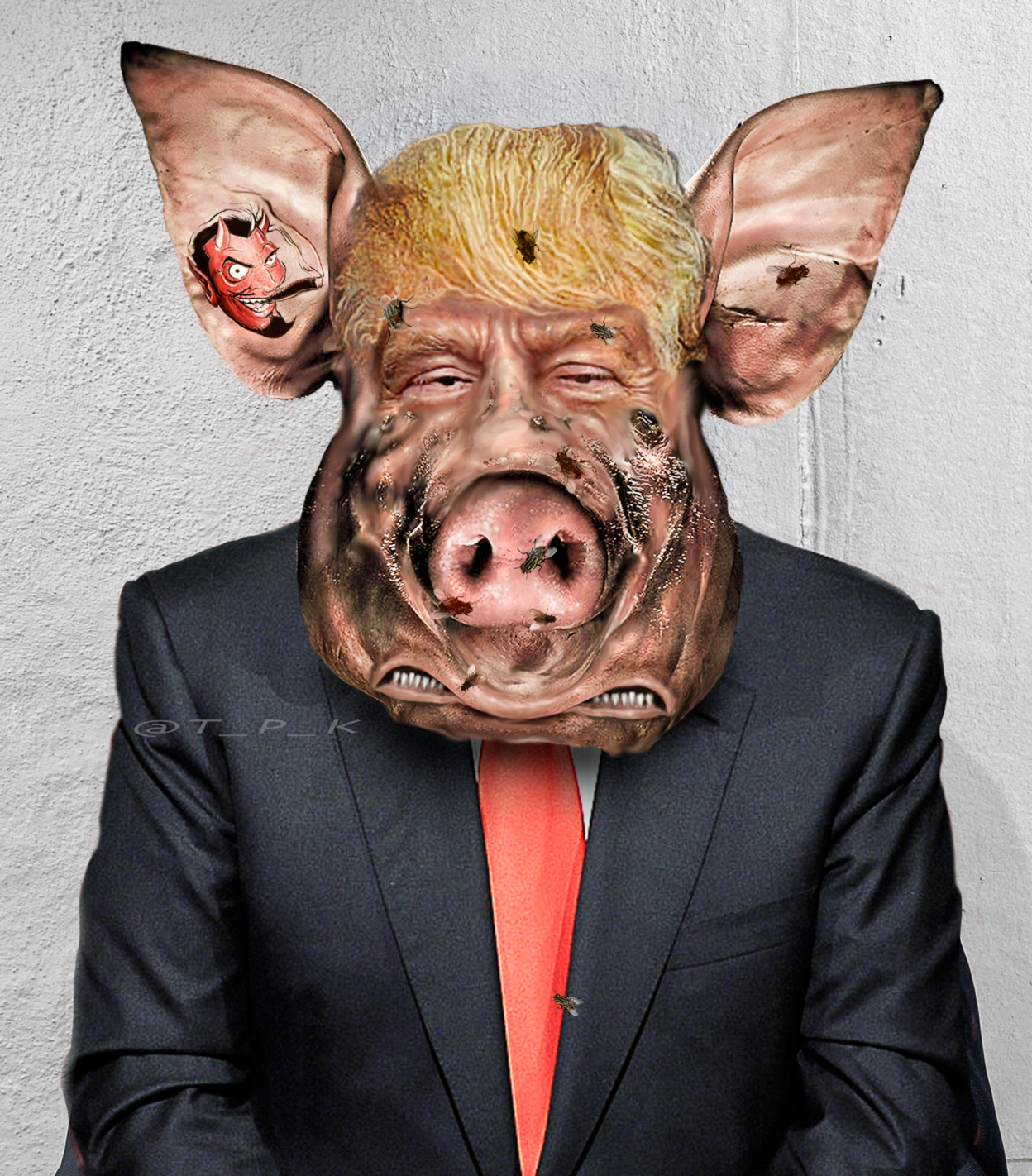 In our previous efforts to explain the Trump Phenomenon (see here, here, and here), we’ve used Fox News, Mary Shelley’s novel Frankenstein (1818), and the cult hit film Ghostbusters (1984) as reference points. It is the scene from Ghostbusters, where Dr Ray Stantz (Dan Aykroyd) is unable to control his unconscious fear and unwittingly provides a new destructive form for the beastly other-worldly avenger, Gozer the Traveler, which provides the segue to our next literary work to mine: William Golding’s classic 1954 novel Lord of the Flies. And should Drumpf carry through with his recent threat to start acting presidential, we might have to do a Dr. Jekyll and Mr. Hyde take-off as well. God help us all.

While last night’s debate seemed to be a step in that direction, Drumpf’s  record of bullying and incitement will hang around his neck like a rotten fish. In an incident last August two Boston area men attacked a homeless Latino guy with a metal pipe and then urinated on him, telling police:

“Donald Trump was right. All these illegals need to be deported.”

For the record, the man was in the country legally. Then two weeks ago at a  Trump rally in Las Vegas, his speech was interrupted by one or more protesters, a common occurrence these days. As a protester was being dragged out of the arena, Dumpster Drumpfster shouted into his microphone:

“I’d like to punch him in the face…He’s smiling, having a good time…In the old days,” he added, protesters would be “carried out on stretchers. We’re not allowed to push back anymore.”

Well, he got his wish, by proxy. Last Saturday night in North Carolina, a protester was being led by police out of the aren when he was ambushed by a 78 yer old, pony-tailed, cowboy hatted man, as he passed by. In the videotape below, the attacker, John McGraw, hits the victim,  Rakeem Jones, with an elbow strike to the side of his head. McGraw, who wasn’t arrested at  the scene, watches as Jones is dragged away by the police as if he is the perp and not the victim  The five or so police that were within a few feet of the incident tried to pull the old Sergeant “I see nothing!” Schultz routine; that is, until a video surfaced that clearly showed the assault.

A Drumpf supporter cheap-shots a black protester. Wow, what courage.

Asked afterwards if he had any regrets, McGraw replied no. After intimating that Jones might have been a Muslim terrorist, McGraw doubled down, saying:

“Next time we see him, we might have to kill him.”

In last night’s debate, Trump defended his various provocations, saying they were “very, very appropriate.” But it’s not just his supporters that are succumbing to the Drumpf’s bullying and incitement. In the previous debate, a desperate Marco Rubio precipitated a dick measuring contest over a question about the size of Drumpf’s hands; and Ted Cruz joined in what turned out to be the GOP’s rendition of a schoolyard brawl, laced with adolescent taunts and insults.

Drumpf’s strategy seems to be to ratchet up the public’s sense of fear and anxiety about everyone from terrorists to immigrants to Muslims going to school or vacationing in the U.S., and then say: “Who’s your daddy? Who’s going to protect you? Little Marco? That ‘pussy,’  Lying Ted Cruz?”

Lord of the Flies

Which brings us to the Lord of the Flies. (Required reading for Drumpf campaign strategists and available as an appendix to the Donald Drumpf Playbook of World Domination.)  The story begins with a group of young boys who crash-land on a deserted island and are forced to create some semblance of a social order until they can be rescued by adults. Though they start off well, electing a leader and creating a basic division of labor, things deteriorate as fear of “the beast” replaces rationality. A large number of them devolve from civilized creatures into outright savages, culminating in the murder of two young boys whose respective intelligence and compassion are seen as “foreign,” as “other.”

(I’ll assume that most readers are familiar with the basic story, as it was required school reading for most of us. But for those who aren’t, or in need of a refresh, the basic plot points and an exploration of its rather complicated themes and symbolism will be supplied in a subsequent post. For instance, literary critics still debate whether the story is a religious or a Freudian allegory.)

Reported sightings of the Beast initiate a search and destroy mission, led by the character who most resembles Drumpf, a self-asserted leader by the name of Jack. Jack probably doesn’t even believe that the Beast is real, but he does realize how the fear of it can be used to concentrate influence and power into his hands. As the leader of the hunting tribe (comprised of boys who much prefer the excitement of stalking and bloodletting to the drudgeries of community building), Jack leads them on a mission to find and kill the Beast. Their failure to locate it or its lair is rationalized by the theory that it is actually and animal-ghost hybrid, which becomes a fear force multiplier.

The boys do kill a large pig on their first night out. They cut off its head and put it on a steak as a sacrificial offering to the Beast. Later, as the head decomposes in the hot jungle sun, it is suffused by a large cloud of flies, giving the book its title. (Lord of the Flies is the literal translation of the Biblical name for an evil, mischievous spirit by the name of Beezlebub.*) One of the boys, Simon, contemplates the pig’s head and the fear it represents. The head appears to talk to him, revealing that the Beast itself does not exist, but is the externalization of the boys’ own primitive fears being made manifest. When Simon shares this insight with the other boys, he is roundly rejected and then ritualistically murdered.(Apparently just as haters gotta hate, fear mongers gotta fear.)

Moral of the story as applied to Drumpf’s political campaign: Be careful what you ask for.

Imagine how Drumpf’s authoritarian bullying would play out on the world stage if he were to become the executor of US foreign policy. He has cited approvingly a statement by the Italian fascist dictator Benito Mussolini that” It is better to live one day as a lion than one hundred years as a sheep.” And he seems anxious to cultivate his budding bromance with the Russian dictator, Vladamir Putin, which Huffpo describes as follows:

As if the Republican Presidential race wasn’t strange enough already, we recently witnessed Russian President Vladimir Putin praising, of all people, Donald Trump. Putin called Trump a brilliant and talented leader who is colorful and “the absolute front-runner in the presidential race.” Trump already in an earlier remark said that he would “probably get along very well” with Putin.

Speaking of authoritarians, it’s no wonder that one of Drumpf’s supporters is Donald Duke, the head of the clueless Klu Klux Klan. Then of course there is Drumpf’s signature foreign policy initiative: building a YUGE wall across the US-Mexican border to keep all those the rapists, murderers, and drug dealers out. And getting Mexico to pay for it, of course. If you believe that, I’ve got a case of Trump Steaks to sell ya.

If Donald Drumpf can be symbolized as a rotting pig’s head, then the media-industrial-complex can be compared to a hoard of buzzing flies feeding off its rotten flesh. Take the case of Melissa Harris Perry and MSNBC. Though Perry didn’t explicitly cite MSNBC’s relentless Drumpf coverage as a reason for walking away from her fours-hours-a-weak hosting gig, given that the network had preempted her show twice to cover the presidential political races (without even the courtesy of a heads-up to her and her loyal audience of self-described nerds); and given that Drumpf receives the vast amount of coverage compared to other candidates―something like 5 to 1 by all the networks―it’s not hard to conclude that Perry, one of the smartest cable teevee hosts in the business, was a Drumpfian casualty.

For a taste of how MSNBC is doing business these days, consider this from the Sun-Times:

During the middle of a seasoned journalist’s critique on the scope of reporting that Republican presidential candidate Donald Trump has received, MSNBC cut the programming to give Donald Trump more coverage.

New York Times political reporter Nick Confessore was saying that the bombastic candidate has dominated news outlets to gain free airtime when the station cut to a rally where the candidate was giving one of his stump speeches.

“Every time he opens his mouth, he’s on national TV,” Confessore said, before getting cut off.

Trump’s use of vitriolic rhetoric against Muslims, Mexicans, immigrants, as well as his misogynistic statements  against women, is pushing bullying, prejudice, and incitement to new heights. Which of course fits the present zeitgeist perfectly, because it is precisely the intolerance and fear of The Other that is a major Bogeyman of Trump supporters. On Drumpf Island,  his tribe finds license to “go native.”

History, and literature,  is rife with unethical, unscrupulous individuals and characters. Deception, lies, manipulation,and subterfuge are their stock-in-trade. That so many real-life individuals gravitate toward one particular party over the other, I will let political scientists explain. For now, they are almost exclusively concentrated in the Republican party, which is on the verge of tearing itself apart. The center cannot hold, as Yeats described it.

After enduring decades of manipulation and lies by the fear-mongering Republican establishment―Trump being just the latest, unplugged manifestation thereof―it will be fascinating to see if the GOP electorate finally says: Enough is enough!

How long can the fear card be played? FDR said: We have nothing to fear but fear itself. Jesus proclaimed: Fear not. And as The Urantia Book puts it:

Few persons live up to the faith which they really have. Unreasoned fear is a master intellectual fraud practiced upon the evolving mortal soul.

*Beelzebub is described in The Urantia Book as a key lieutenant of the planet’s rebellious Planetary Prince, Caligastia; i.e., the actual, historical Devil. Beelzebub was in charge of a group of rebellious, mischevous midwayers, so named because they occupy a dimension of reality midway between humans and angels. Midwayers can interact with physical reality and have control over the beasts of the realm, whilst angels  do not. For example, it was (the good) midwayers who provided  protection for Daniel in the lion’s den;  and it was they who rolled back the stone door in front of Lazarus‘s tomb. Pursuant to the incarnation of Christ Michael on Urantia 2000 years ago, Beelzebub and his mischievous followers were rendered inoperative; that is, taken into custody by the agents of the Ancients of Days, the latter being the equivalent of the superuniverse Supreme Court. (For a functional approximation of the said agents, envision Gort from the film The Day the Earth Stood Still.)
———–