WASHINGTON D.C. —  Like many things emanating out of Washington, the notion that the town was originally “built on a swamp” isn’t based on fact, or truth.  That does not prevent the rapacious liars now infesting it from eschewing all fact and truth from their daily defamations.

And of course, the most rapacious of these liars has, in today’s parlance, “weaponized” the old swamp slur to include the entire lot of D.C. liars themselves, while employing the sort of histrionics usually reserved for carnival barkers, Bible tent preachers, and madmen;  what started out as poor geography has become the destroyer of worlds.

It’s not a surprise that Donald Trump— the most avaricious of liars— would seize upon an existing falsehood like the phony swamp story, and make it hysterically worse.  “Drain The Swamp!” “Drain The Swamp!” was his tiresome refrain early on, which the poorly educated, all aglow in the thrall of rote group repetition, would chant right back at him, usually followed with “Lock Her Up!” “Lock Her Up!”  It was also no surprise that someone would eventually find it in their fervent imagination to compare Trump to one of our greatest presidents— George Washington— and blissfully stuff our nation’s worst nightmare of a president into one of George’s most heroic, memorable tableaus¹:  crossing the freezing Delaware with his army on Christmas night, to surprise the shit out of the Hessian mercenaries and win a decisive battle.

That “someone” turned out to be America’s greatest artist Jon McNaughton, who’s not shy about putting his political opinions where his anus is.  You can damn near smell the swampiness of his piece called, “Crossing The Swamp,” just below my piece, “THE SWAMP THING”. . .

McNaughton refers to himself as a “Trump observer,”
rather than a “Trump supporter.”
Don’t bullshit us, bro.

If— after looking at these two cartoons, you dare to say McNaughton and I see things differently, you will be slapped hard across the face with a boat oar for stating the obvious.  So let me hep you.  One is a piece of childish absurdist metaphor masquerading as half-baked alternative-fact patriotism;  the other is a truly nightmarish, criminal carnival of incompetence, floundering in a political river of shit that flows downstream from a bought-and-paid-for Republican controlled Congress.

But McNaughton refers to himself as a “Trump observer,” rather than a “Trump supporter.”  Yeah?  Don’t bullshit us, bro.

What kind of remotely honest “observer of Trump” whacks fifty pounds of pure fat-ass off of Trump’s behind, and another seventy-five off his goddamn gut?  Trump’s waist hasn’t been that small since he was playing soldier at a Ra-Ra Military academy.  But don’t take my word for it;  Wonkette does a surgical evisceration of “Crossing the Swamp,” here.

Under this piece at McNaughton’s website, entitled “Expose The Truth,” is this really prescient and audacious “Product Description”:
“There has been a crusade in this country led by a group that wishes to overturn the election and impeach President Trump. Robert Mueller leads a special council [sic] of at least 17 partisan Democrat attorneys who have yet to find a single piece of evidence against the President, yet they ignore the mounting verifiable evidence against Russian collusion with the DNC and the Clinton Foundation. The political bias and negligence of those who have lead [sic] the Department of Justice and the FBI is forthcoming. There comes a time when you have to take a stand to Expose the Truth!”

Even if taking that “stand,” with all it’s provable falsehoods hanging out, makes you sound like a dunce for all posterity, while simultaneously proving “you cain’t feex stoopid,” you blithely take that stand anyway, because, well, people keep buying your cartoons.

McNaughton referred to himself as a “Trump observer,” rather than a “Trump supporter.”  But even if he’s not a rabid Trump supporter, he’s still a piss-pot-poor observer.  Remember when Trump had his physical with “Ritalin Ronny” Jackson?  And he said Trump was like one notch short of being Hercules, and also one iddy-biddy pound short of being officially obese?  How biased do you have to be as an “observer” to miss seeing his hhhuge frickin’ ass?  To a Trump supporter’s eye, Trump’s suit coat profile looks down-right athletic;  so check out the real girth of Trump’s flabby buttocks down below.   Also in “Expose the Truth,” Trump towers (heh) over Robert Mueller, when in fact even Trump’s self–inflated height is still only a scant three inches taller than Mueller.  If Mueller is 5′ 11,” then McNaughton’s Trump is easily pushing 6′ 7″— should he ever stand up straight.

But the ugliest part of McNaughton’s must-tell-it-like-it-is cartoon is the temerity of his imaginary Trump assaulting the Special Counsel on the floor of the people’s House.  Carefully digest McNaughton’s brainwashed thesis, if you can:
In McNaugton’s alternative-fact universe— Trump, a four deferment,* draft-dodging rich-bitch— supposedly strolls up and grabs the necktie of ex-Marine Robert Mueller, now the Department of Justice Special Counsel charged with determining, on behalf of all Americans— whether president Trump is guilty of crimes against the United States— and Trump, presumably— examines him— with a child’s magnifying glass.

Robert Mueller was not drafted into military service, he volunteered, after a close friend was killed in Vietnam.  During his service in and during the Vietnam War, Robert Mueller’s military decorations and awards include:  the Bronze Star Medal with Combat “V”;  a Purple Heart Medal;  two Navy and Marine Corps Commendation Medals with Combat “V”;  a Combat Action Ribbon;  the National Defense Service Medal;  the Vietnam Service Medal with three service stars;  the Republic of Vietnam Gallantry Cross;  the Republic of Vietnam Campaign Medal;  and the Parachutist Badge. 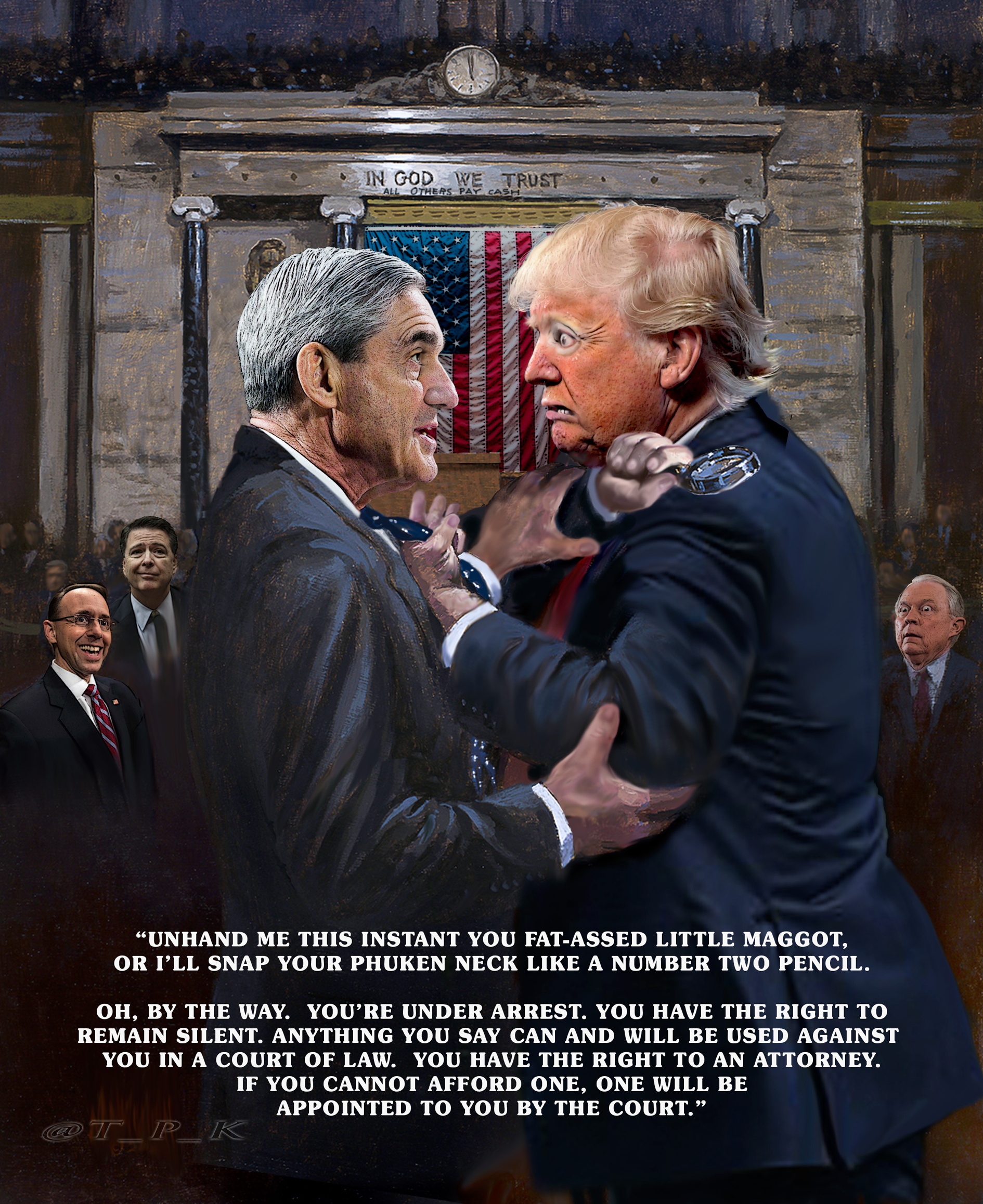 Donald Trump has never served in America’s military in any capacity.  It is unclear what decorations he may have been awarded at the New York Military Academy, as he has refused to let his transcripts be reviewed by news organizations.

Those timid souls who can only keep up the struggle of life by the aid of
continuous false illusions of success are doomed to suffer failure and experience defeat
as they ultimately awaken from the dream world of their own imaginations.
—The Urantia Book

Trump has never served in the military. Selective Service records obtained from the National Archives by The Smoking Gun in 2011 reveal the following history of his draft eligibility:

Donald Trump became eligible for the draft on his 18th birthday (14 June 1964) and registered with the Selective Service System 10 days later. He received the first of four 2-S (college) deferments on 28 July 1964.
Trump received his second college deferment on 14 December 1965.
Trump’s previous deferment expired and he was reclassified 1-A (available for military service) on 22 November 1966. His 2-S deferment was renewed on 13 December.
1967:  No record.
1968: Trump received his fourth and final college deferment on 16 January 1968. After graduating from Wharton, he was reclassified 1-A on 9 July 1968. Trump underwent an Armed Forces physical examination (with a result listed only as “DISQ”) on 19 September 1968 and was reclassified 1-Y (qualified for service only in time of war or national emergency) on 15 October 1968.
According to a statement from the Trump campaign, the 1-Y classification stemmed from Trump’s having bone spurs in both heels:  “While attending the University of Pennsylvania’s prestigious Wharton School of Finance, Mr. Trump received a minor medical deferment for bone spurs on both heels of his feet. The medical deferment was expected to be short-term and he was therefore entered in the military draft lottery, where he received an extremely high number, 356 out of 365.”

1972:
Despite the supposedly “short-term” nature of Trump’s disqualifying physical condition, on 17 February 1972 he was reclassified 4-F (not qualified for military service), presumably due to the abolishment of the 1-Y classification the previous year.