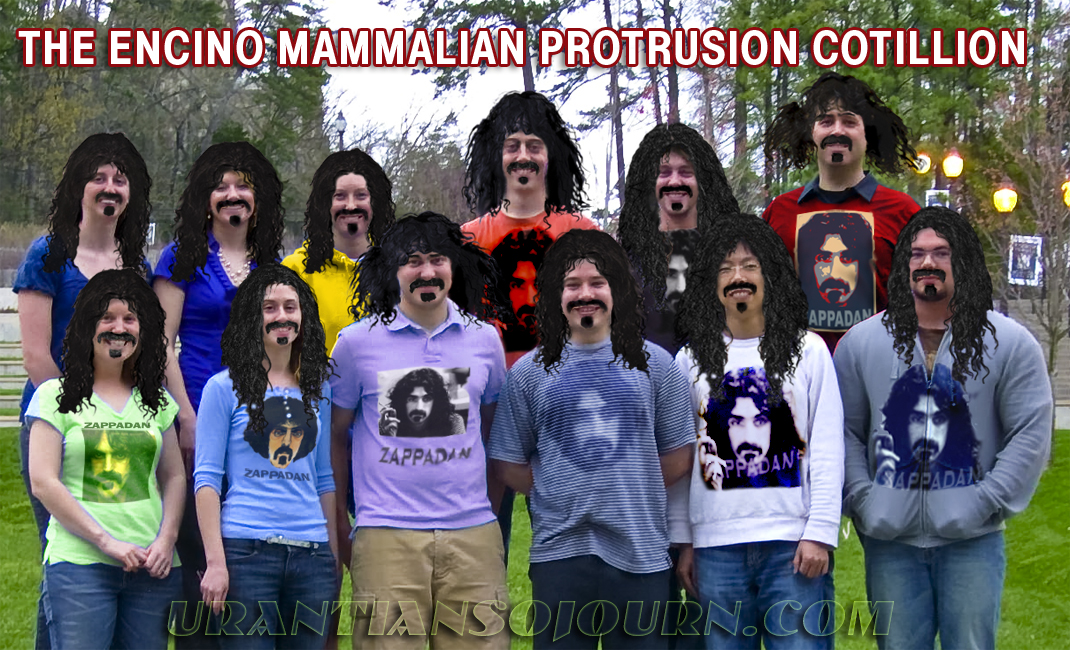 ENCINO—  Zappadan dress-up parties are becoming increasingly popular with Zappaphiles, and The Encino Mammalian Protrusion Cotillion is no exception, although members are required to only dress up as Frank, which has reduced their membership to a mere dozen highly excitable mammals.

The Mammalian Protrusion Cotillion members all more or less confess a musical admiration for either of the two soft, protruding organs located on the upper front of a woman’s body, which are known to secrete a warm and wonderful elixir, usually after a protracted bout of pregnancy.

The Encino Cotillion gathers at a discrete distance from the heart of the Pepperdine University satellite campus, and like other Zappadan revelers, lay into the White Port and Lime Juice.  But unlike other cotillions, however, the Encino boobs eschew the traditional burnt weenie sandwich breakfast and move right into a screening of the Free Range Boob scene from Woody Allen’s, Everything You Always Wanted to Know About Sex* (*But Were Afraid to Ask), where all sorts of prepared foodstuffs and rancid beer are hurled at the screen, while the twelve perform an unrehearsed dance number to a randomly selected playlist of Zappa tunes.

Anyone found to be sporting rigid ninnies after the dance are paraded in front of the members in a highly ritualized and often disturbing episode of creamed-corn spewing, followed by a free-for-all roto-plooking of any hapless strangers who may have gathered to watch the festivities. Citizens who manage to enjoy the plooking are invited to join cotillion members for lunch at the Zappadan Diner.

A small but highly vocal group of local Encinoans have begun insisting the celebration be moved to neighboring Tarzana, thanks to last year’s accidental spooging of the mayor after he was miss-identified as L. Ron Hoover.