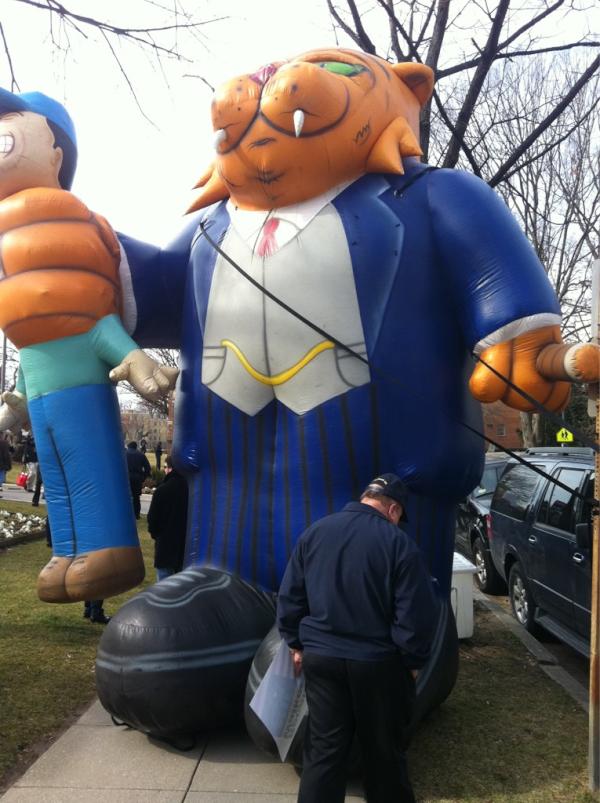 The bat (shit crazy) clown signal shone brightly over D.C. this weekend, drawing an A-List of wingnuts to the annual Conservative Political Action Conference (CPAC) convention like moths to a flame. Our past coverage of the Wingnut Woodstock can be found here , here, here, here, and here.

Last year, Coultergeist told the CPAC audience that if they didn’t run Chris Christie, Mittens would be the nominee and Obama would win. Ah, what a difference a year, and a lousy field of contenders, makes.  This year, he ate a ton of roadkill as he announced he is now backing Mittens. But he just couldn’t help herself, stepping on his endorsement by then telling filthy jokes about Bill Clinton ejaculating all over the Constitution. Classy as always, Anne.

This year featured the usual suspects, including the leading Three Stooges thus far in the GOP delegate count: Willard Mitt Romney, Newt Gingrich, and Rick Santorum. The other contender, Ron  Paul, despite winning the previous two CPAC straw polls, didn’t attend, choosing to campaign in Maine instead, perhaps because this year the method of the voting was changed to an all electronic voting scheme, removing his major advantage– warm bodies and paper ballots.  It seems to have worked, as Romney won this year’s poll.

Holding up one of the Rethugs’ favorite straw man and shaking it vigorously before the crowd, Santorum promised:

“We will no longer abandon and apologize for the policies and principles that made this country great for a hollow victory in November.”

Excuse me, but when have conservatives ever apologized for anything? It simply isn’t in their nature. (There is good neurological evidence for this, but that ‘s fodder for another day.)

Foster Fries, the 3/4 billionaire who until this week had almost single-handedly kept Santorum’s campaign alive through donations to his Super Pac, introduced Santorum. But first he told a pretty good joke:

“A conservative, a moderate, and a liberal walk into a bar. The bartender says “Howdy, Mitt.”

I see a devastating Dem commercial in the making, should Romney be the GOPer nominee.

Mittens continued his brown nosing attempts to convince the wingers that he is really one of them, using the word “conservative” 26 times.  At one point he went so far as to say:

“But I was a severely Republican conservative governor.”

Whatever that means. Apparently, Willard still hasn’t grokked the archival function of video tape. In the clip below,  he tells a Massachusetts audience in 2002:

“My views are moderate and progressive.”

Romney calls himself a liberal and progressive

Mittens also squeaked  out a tentative win in the unofficial Maine caucus Saturday. But it wasn’t all good news for the GOPer Ken Doll. A new PPP poll shows Santorum now leading Romney nationally by 15 points (Gingrich by 21, Paul by 25).

Gingrich added fuel to the fire of the growing Rethug meme:  Obama is waging  a war against religion. (What else would you expect from a secret Muslim with a Kenyan, anti-colonial world view?)   Referring to the Administration’s new and subsequently revised mandate that insurance companies, not religious institutions, cover women’s reproductive services (a preventative regime that is cheaper in the long run), Gingrich boldly declared:

Maybe someone should point out to Gingrich and his fellow clowns that, as Sam Stein wrote:

“…roughly 14 percent of all birth control prescriptions are written for reasons other than contraception, including ovarian cancer, ovarian cysts, endometriosis, and endometrial cancer.”

It should go without saying that preventing unwanted births is the best single way to cut down on abortions, supposedly the holy grail of conservative social activism.  But grokking that obvious fact seems to be  just too much cognitive dissonance for “the party of life” to resolve.

Outside the convention, the Occupy folks made their presence known. Conservative flogger Andrew Breitbart just couldn’t help himself, taking his flaming id to the streets long enough to  yell maniacally at the occupiers:

“You are freaks and animals….Filthy, filthy freaks!”

Andrew Bretibart proves once again what a classless dick he is

During his turn at the podium, Breitbart said: “Newt was a proxy,” and described Gingrich as “damaged goods” because of the commercial he shot with Nancy Pelosi promoting cap and trade legislation to deal with climate change, a point we made a year ago in The Newtie and Nancy Show.

Newt Gingrich and Nancy Pelosi aglow in the spirit of bipartianship

The convention ended with a frenzied oration by none other than the half-baked Alaskan governor and failed vice-presidential candidate, Sarah Palin. TPM describes the euphoria thusly:

Amid wild cheers as she took the stage, audience members joined to serenade her with a cacophonous “Happy Birthday” for her 48th that day. She proceeded with a culture war jeremiad reminiscent of her 2008 convention speech that slammed elites, liberals, and especially the city in which she delivered her speech, Washington, DC…

“This is the playground of for the government rich,” she said.”They are hoping you work really hard to keep it going.”

Even for a party that’s made anti-Washington sentiment its number one talking point, It was an especially provocative passage given that two of the current GOP presidential frontrunners, Newt Gingrich and Rick Santorum, have had post-Congress careers working for special interests in Washington.

While conservative icon Ronald Reagan received his usual adulation, one has to wonder whether if he were running for reelection today, he would even have made it past the Iowa straw poll.  A Republican president who raised  taxes 11 times, gave amnesty to 3 million aliens, cut and run from Beirut after 241 American servicemen were killed by a suicide bomber, and negotiated an arms reduction treaty with The Evil Empire would more likely be tarred and feathered and ridden out of town on a rail than nominated by a party taken hostage by its extremist wing.

The most extreme of the Freshman Teabagger Congressmen, Rep. Allan West (Rethug-Fla,) probably summed up the philosophy of the CPAC crowd best when he proclaimed:

To quote the great Dr. King: