Three years ago, we posted “Prisons For Profit,” which explored the for-profit prison industrial complex. As one might expect, with the largest prison population on the planet ― nearly as much as China and Russia combined ― the US had once again proved its entrepreneurial mastery by pioneering a new profit center for our beloved Wall Street banksters.

The industry started out with a bang, as seen in this 2001 article by the Murdoch owned rag, The New York Post, titled: Private Prisons Stocks Hot- New Internment Camps, Cells Coming“:

America’s new wall of homeland security is creating a big demand for cells to hold suspects and illegal aliens who might be rounded up.

Stocks of private companies that build and operate prisons for governments have zoomed as high as 300 percent in anticipation of internment camps and new prisons.

All this was made possible when in 1996 President Bill Clinton signed the IIRAIRA Act into law:

President William Jefferson Clinton signed sweeping immigration reform legislation into law: the “Illegal Immigration Reform and Immigrant Responsibility Act” (IIRAIRA). Two of the law’s central components were the creation of mandatory detention of certain immigrants charged with criminal grounds of removal, and the establishment of a program that permits state and local law enforcement to arrest, detain and interrogate noncitizens believed to be in violation Federal immigration laws.

Fast forward to the present. Yahoo Finance on April 12 of this year, reported on the largest for-profit prison corp, Corrections Corporation of America (stock symbol CXW) about the challenges it now faces:

Average compensated occupancy has declined every year since 2007 from 98.2%, and stood at 82.5% for the year-ended Dec. 31, 2015. While CXW desires a certain level of vacancy in order to meet demand, occupancy has remained well below its target range of available beds. CXW has lost multiple contracts in the last several years, some by choice as they relate to the company’s lower-margin, higher-occupancy managed-only facilities. The company has been unable to recoup the losses in occupancy through acquisitions or new contracts. Margins have also suffered, dipping below 28% in 2015 after remaining approximately at 30% since 2007. The decline in California inmate populations has also negatively affected the company’s operational metrics. However, CXW has consistently grown revenues per man-day with recent increases due to its high earning South Texas Family Residential Center…

“Even toddlers get ID cards… 130 members of Congress have called on the administration to close the centers… that despite the amenities — a chapel, beauty salon and soccer field among them — the centers are prisons and no place for children.”

Around mid-February of this year, as the US stock market was tanking and world economies were teetering on the brink, the “R” word ― recession ― was making the rounds. But then the market recovered, recouping its losses for the year. Everything’s good now, right? Tell that to the Great State of Mississippi, where a troubling economic metric has reared its ugly head. What is this canary in the recessionary coal mine? The decline of prisoners in state and county jails.

County officials across Mississippi are warning of job losses and deep deficits as local jails are being deprived of the state inmates needed to keep them afloat. The culprit, say local officials, is state government and private prisons, which are looking to boost their own revenue as sentencing and drug-policy reforms are sending fewer bodies into the correctional system.

In the late 1990s, as the overcrowded Mississippi prison system buckled under the weight of mass incarceration, the state asked local governments to build local correctional institutions to house state prisoners. It was billed as a win-win: The Mississippi Department of Correction would foot the bill for each prisoner, and the counties would get good jobs guarding them. The state guaranteed that the local jails would never be less than 80 percent occupied, and the locals would get a 3 percent boost in compensation each year.

After a few years, say local officials, the state offered a new deal: Instead of the 3 percent bump, they would give the locals more and more prisoners, thus boosting total revenue. Today, the state pays $29.74 per day per prisoner to the regional facilities, a deal that worked for everybody as long as the buildings were stuffed full with bodies.

Scott Strickland, president of the Stone County Board of Supervisors, said reforms at the state and local levels have shrunk the prison population. “Federal laws took some part in that — allowing prisoners to serve only a certain percentage of their term,” he said. “Also, they’ve reduced prison sentences for certain drug-related offenses.” [ibid]

God help us if the gubmint should ever decide to actually legalize drugs. Not only would that severely effect the prison industrial complex, but imagine the wailing and gnashing of teeth we’d hear from the drug cartels as they are forced to rely on their less lucrative profit centers: immigrant smuggling, kidnapping, sex trafficking, and murder for hire. On a positive note, we could expect at least a temporary boon for K Street lobbyists, who will be able to sign a whole new clientele. (Though they might want to consult with Walter White about the that industry’s tolerance of failure.) But let us return to the law abiding civil servants and job creators of Mississippi.

As the wave of mass incarceration begins to recede, the Mississippi controversy has local and state officials talking openly about how harmful locking up fewer people up will be for the economy, confirming the suspicions of those who have argued that mass incarceration is not merely a strategy directed at crime prevention. “Under the administrations of Reagan and Clinton, incarceration, a social tool used for punishment, also became a major job creator,” Antonio Moore, a producer of the documentary “Crack in the System,” wrote recently.

“I don’t think it necessarily started out this way, but the inmate population has become the backbone of some of these counties that are involved,” said Mississippi Corrections Commissioner Marshall Fisher as the controversy heated up.

The prisoners have value beyond the per diem, county officials add, when they can be put to work. State prisoners do garbage pickup, lawn maintenance and other manual labor that taxpayers would otherwise have to pay for. Convict labor has made it easier for local governments to absorb never-ending cuts in state funding, as tea party legislators and governors slash budgets in the name of conservative government.

The state knows it, and now demands that local jails house state convicts who perform labor for free, George County Supervisor Henry Cochran told The Huffington Post. The counties take the deal. “You’re either gonna go up on everybody’s garbage bill, or you’ve gotta house those inmates,” Cochran said. “You’re using that inmate labor, so [taxpayers are] getting a little good out of that inmate for their tax dollars. You either gotta hire a bunch of employees or keep that inmate. It’s like making a deal with the devil.” [ibid]

Speaking of the devil, have we mentioned recently that Debbie Wasserman Schultz ― who in her capacity as head of the DNC disadvantaged Bernie Sanders over the original debate schedule, is accused of a conflict of interest in handling tens of millions dollars of Hillary Clinton campaign donations, and was sued last month by the Sanders campaign over access to voter registration information ― is also a stooge of the private prison industry?

By 2012, the private prison industry, one of the main beneficiaries of this detention strategy, had fully wrapped its tentacles around the Democratic Party—blanketing them in a mutually beneficial quid pro quo for Democratic support of policies that increased profitability. For example, Democratic National Committee Chair Rep. Debbie Wasserman Schultz notoriously sided with the Corrections Corporation of America over her constituents concerning the construction of a for-profit prison to jail immigrants.

Schultz is also a supporter of the usurious payday loan industry, so you might want to remember that the next time she and the DNC ask you for a donation.

As for Bernie’s position on what he calls “the “private, for-profit prison racket,” last September he sponsored “bills to ban private prisons, reinstate the federal parole system and eliminate quotas for the number of immigrants held in detention.” The Burlington Free Press has more:

…the “Justice is not for Sale Act”… would bar the federal government from contracting with private incarceration companies starting two years after passage.

Taxpayers pay $80 billion a year bill to incarcerate 2.3 million people, according to the lawmakers. Of the nearly 1.6 million people in federal and state prisons in 2013, 8.4 percent were in private facilities.

“Incarceration should be about rehabilitation and public safety, not profit,” he said.

Finally, the wreckage left in the wake of conservative “reformers” grabbing the reins of political power at the local level aren’t limited to only one state:

Like Mississippi, neighboring Louisiana, as well as Kansas, have recently become laboratories for conservative policy, with hard-line Republicans slashing taxes and dramatically cutting spending. The argument was that the tax cuts would fuel growth. Instead, the states have become economic basket-cases — Kansas actually performed worse economically than its neighbors. Deficits in Kansas and Louisiana both soared and basic services have been cut beyond the bone. [ ibid]

There’s a widespread belief, especially among the GOP establishment, that if Donald Drumpf becomes the  nominee for president, the down-ballot effects would be enormous, affecting the Supreme Court, the Senate, the House, a number of GOP governorships, and even races at the local and state level. That’s why since last August I have posted here on the Trumpenstein phenomena (see here; here; here; here); proudly displayed a custom designed “Trumpenstein!” bumper sticker on my car; and on my computer. 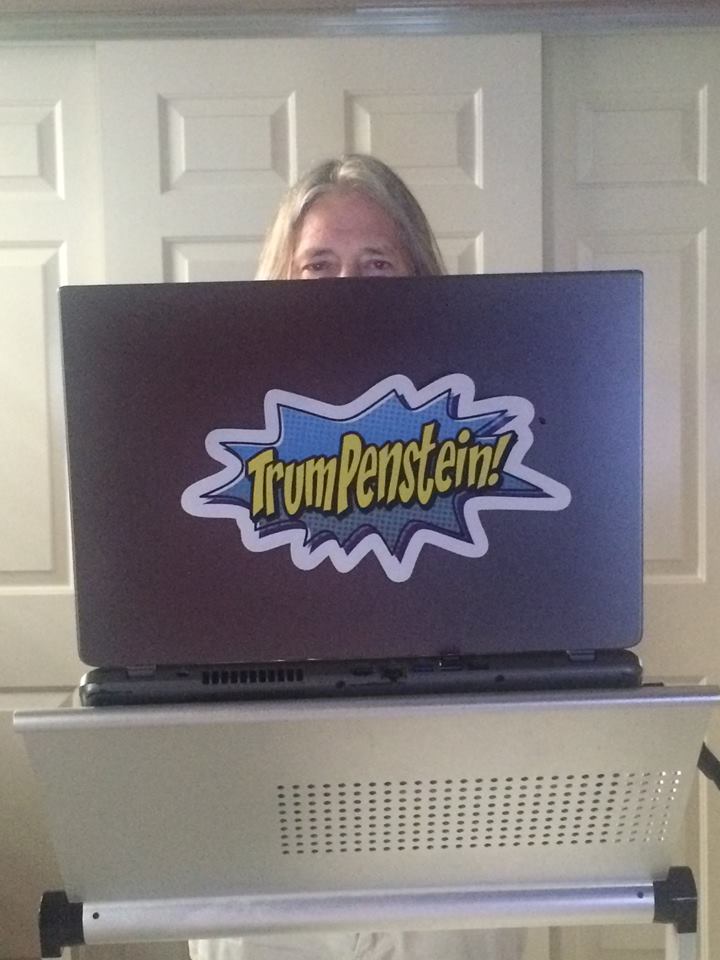 I mean that last line literally:  For the good of the party, not to mention the country, please, just go away.