Or Obama, because he was photographed wearing a turban?

Of course not, since Islam didn’t come into existence for another six centuries or so.

Did Bush wear a turban? 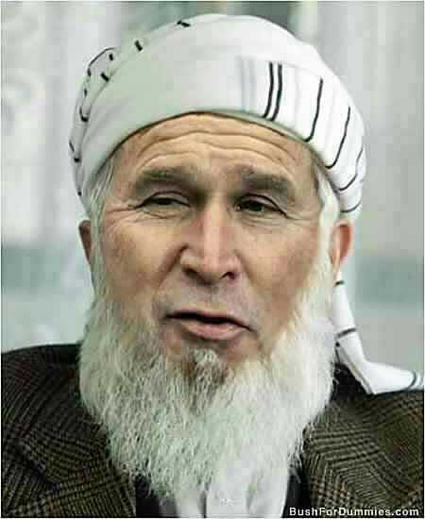 Yeah, but does anyone care?

Did Jesus wear a turban?

Most likely, since turbans were far more than a fashion accessory for the Semites who lived in a desert environment, noted for its sudden sandstorms.

Message to the Clinton op research team, and/or the Repugs and the Christian Right: Jesus wore a turban, as did all Aramaic speaking Semite tribes of his time.

As Jesus saw his mother, with John and his brother and sister, he smiled but said nothing. Meanwhile the four soldiers assigned to the Master’s crucifixion, as was the custom, had divided his clothes among them, one taking the sandals, one the turban, one the girdle, and the fourth the cloak. This left the tunic, or seamless vestment reaching down to near the knees, to be cut up into four pieces, but when the soldiers saw what an unusual garment it was, they decided to cast lots for it. Jesus looked down on them while they divided his garments, and the thoughtless crowd jeered at him.
—The Urantia Book