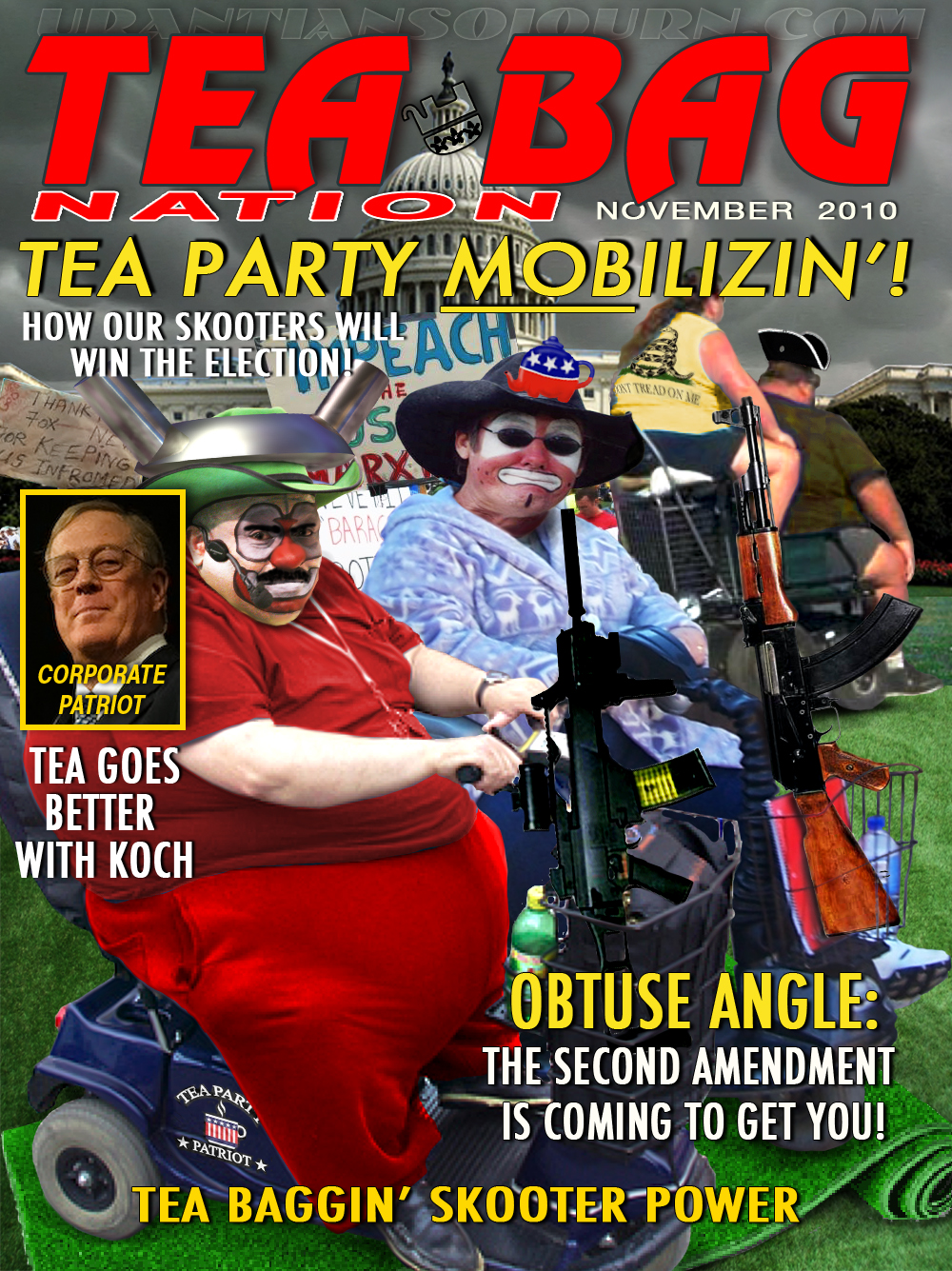 So much better than a frickin’ enima— Tea Bag Mag will literally scare the crap outa you.

The Dog Days of summer have come and gone, and a new issue of TEA BAG is in hand.  The cover, as always, is a provocative look at Tea Party nation, and their phenomenal combination of uniformed politics and morbid obesity.  Ahem, some background is in order.

For a growing swath of people— in numbers, age, and girth— scooting is the new walking.  Once solely the domain of the barely mobile, scooters [aka “skooters”] are becoming more lifestyle accessory than medical necessity as obesity rates skyrocket and life-expectancy rates creep up.  “Our market size will double in the next 15 years,” says Dan Meuser, president of Pride Mobility, the leading scooter manufacturer.  (The company sold about 150,000 scooters last year, at prices from $800 to several thousand.)  With the number of obese adults over the age of 60 in the United States expected to reach nearly 21 million in 2010, a 43 percent jump from 2000, the appeal of the wheel is obvious.

Add a generation of aging Tea Partiers, and you just might have a white suburban army of “Take America Back” rebels on wheels.  In the latest Rolling Stone, Matt Taibbi recently attended a Tea Party in Louisville, Kintucky, and observed:

Scanning the thousands of hopped-up faces in the crowd, I am immediately struck by two things. One is that there isn’t a single black person here.

The other is the truly awesome quantity of medical hardware:  Seemingly every third person in the place is sucking oxygen from a tank or propping their giant atrophied glutes on motorized wheelchair-scooters.  As Palin launches into her Ronald Reagan impression — “Government’s not the solution! Government’s the problem!” — the person sitting next to me leans over and explains.

“The scooters are because of Medicare,” he whispers helpfully. “They have these commercials down here: ‘You won’t even have to pay for your scooter!  Medicare will pay!’  Practically everyone in Kentucky has one.”

Forget what that tells you about Kintucky.  As early as 2005 the government filed suit against scooter stores, who were billing Medicare and Medicade for over 400 million dollars for scooters that were more expensive than “patients” needed. Numerous other types of scooter scams continue to plague seniors of all political stripes.

A hall full of elderly white people in Medicare-paid scooters, railing against government spending and imagining themselves revolutionaries as they cheer on the vice-presidential puppet hand-picked by the GOP establishment.  If there exists a better snapshot of everything the Tea Party represents, I can’t imagine it.

Where I grew up in America, “scooter trash” was a reference to scary low income white people who rode Harleys.  A “bagger” was someone who rode a Harley with huge saddlebags and superfluous lights everywhere.  Now the terms have been redefined as scary obese low income white people who attend anti-government rallies on motorized mobility scooters— with big wire baskets full of Ho hos— and payed for by the very same government that they see as the source of all their problems.  The irony suffocates.

There are other things Tea Partiers share in common, like gullibility, Fox News, lack of sophistication;  but nothing more telling than their willingness to believe right-wing propaganda even at the expense of their own self interest.  This isn’t news, of course, but what is news is the fact that Tea Party skooter trash actually entertains the notion they can take government back with “second amendment remedies”;  that is, using their guns and their mobility skooters, they will some day storm the nation’s capital and after a bloody skirmish, wrest control of government from the hands of the United States military.

The sheer lunacy of their collective failure to think such scenarios through has brought us an electoral slate of national candidates so uniquely unqualified to hold office that it has, more than any other single factor, brought home just how important an educated and well informed electorate is to our democracy.

Normal Americans would like to think such craziness is restricted to the far fringes of American society, but that was before Fox News became an unmitigated 24-7 propaganda tool of a few billionaire plutocrats.  As of now, any Americans found sitting out an election on the sidelines of our electorate, such as the coming midterm elections, deserves to be run over and crushed by some tea bagger on a mobility scooter.  May others learn from their stupid sacrifice.