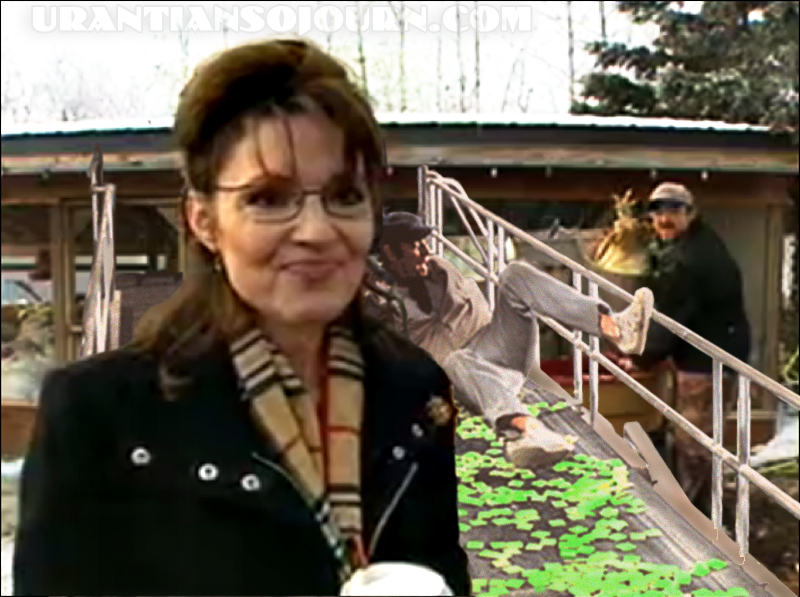 A workman draining blood out of turkeys looks on in disbelief as an unidentified man tumbles down the turkey wafer conveyor belt while Alaska Gov. Sarah Palin babbles about how brutal the “time consumption” was for her on the campaign “trell.”
WTF does she think it would be like if she had been elected?

WASILLA — The sound and smell of bloody turkeys hung heavy in the air as a hyper-caffeinated Sarah Palin bulldozed through another interview today, this one with local Alaskan television.  Remarkably, the governor was entirely oblivious of the goings-on behind her.  The ex-vice-presidential candidate, who is no stranger to turkeys, spoke in stream-of-consciousness breathlessness, while a workman methodically cut turkey throats and drained their blood:

“…I have the same values and convictions, en positions, en policies, um jist a greyter appreciation I think for uh what other candidates go through, ya know it’s it’s pritty brutal the, the uh, time consumption therrre and thee uh, uh innnergy that hasta be spent in order to git out’n about with the message on a national level greyt appreciation for other cannadetts who’ve gone through this but also jist a greyyt appreciation for this greyt country there’s soo many good Americans who are jist, desiring of, of their govermint ta kinda git outa the way an allow them ta grow an prahgress an allow our biznisses to grow an prahgress so greyt appreciation for those who share thatt value, meh and it was a blast everyday was jist a blast out there on the trell.”

(At this juncture a strange man in some distress tumbled down the processing conveyor full of turkey wafers, behind the governor;  he was later identified as a Detective Thorn of the NYPD, and he was insistent that the green wafers were not made of turkey, but were in fact “…made of people.”  The governor’s interview continued unabated.)

Any other future plans for office?

Uhm yaa know, plans jist include ah  ah  eh gittin’ through uh  eh  the budget process were goin’ through right now buildin’ the state’s budget based on ah the price of oil that has plummeted so greyytly an rainin’ in tha growth of govvermint, and uh  uh plans like that that havta do with um helping ta govvern this state and building this team that is continually being built ta provide good service to Alaskans, so in my role as governor thats thats what my plans are all around.”

So why was today so important for you, personally?

Ohhhh well this was this was neat! It I wuz happy ta git to be invited ta particapate in the this an an uh, ya know for one ya needa little bita levity in this job espeshly with the uh so much that has gone on last coupla months that has been so um political obviously that it’s nice ta git out an an do somthin’ ta promote a local business an an  ta jest participate in sumthin’ that isn’t so uh heavy handed politics that uh invites criticism!  Certainly we’ll probly invite criticism fur even doin’ this too but at least this was fun.

Well. Fun for you, Governor.  Not so much for the turkeys;  or Detective Thorn; who also turned up dead shortly after his trip down the conveyor belt. By insisting it would be fine to allow yourself to be interviewed with a turkey executioner, you have once again single-handedly demonstrated your uncanny penchant for shittin’ in your own mess kit.  Scatologists everywhere salute you.

•  •  •  SCATOLOGY WEEK  •  •  •
This concludes our half-assed coverage of Scatology Week;  we hope our nation’s current scatological politics will not become a permanent part of our heritage as a free and gaseous country, but will instead become the rarely necessary punctuation of a history ripe with the fragrance of defiance in the face of so much effluvia from our shitbag political leaders and their shitbag followers.  May they decompose in peace.